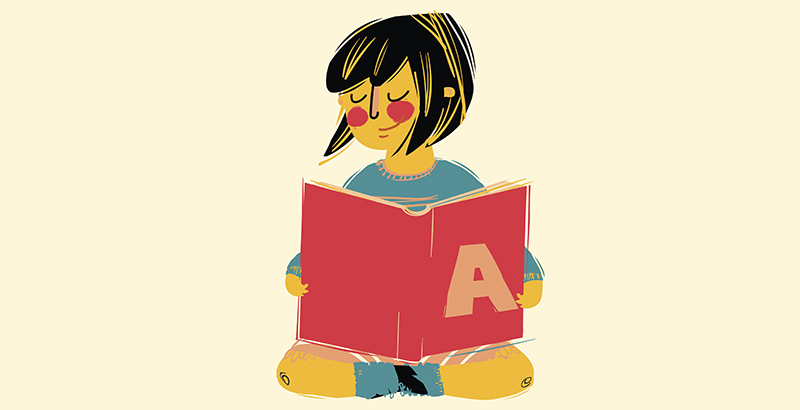 Hollis Irvin learned to read last year. She’s a good reader, her mother, Tiffany Burks, says. Last year, when the pandemic forced schools to close temporarily and during the early days of remote learning that followed, Burks started to worry about her Grier Elementary second grader.

Hollis was starting to read words just to say them out loud — not trying to understand what the words and passages meant. Reading felt like a chore to Hollis, Burks said.

Then they found the Reading Checkup, a mobile application that families can use to work on literacy skills at home. The app takes kids through a quiz and, based on the results, suggests activities and games for them to do on their own or work on with their parents.

“She’s making the connection when it comes to the questions [about what she read], so she’s not just reading to read,” Burks said. “If I had a question regarding one of the passages she read, she can answer the question back. There’s been a lot of growth that I’ve seen.”

The Reading Checkup is available for free in Mecklenburg County as Read Charlotte, a community-wide reading initiative, is leading a free pilot of the app for its maker, Learning Ovations. While Read Charlotte is using it to help parents work with their children, the algorithm it uses was designed to help teachers in the classroom.

“When we think about what’s happening in this COVID environment and post-COVID, our kids are going to be all over the place,” Richardson said. “So the need to have this sort of precision medicine for literacy is greater than ever.”

Richardson was learning more about the platform when the pandemic began. When he learned the Department of Education had asked Learning Ovations to investigate use of the platform at home for kids and parents to use, his ears perked up.

Richardson convinced Learning Ovations to choose Mecklenburg County. His team worked on changes to make the platform more compatible for the community. The first thing they did was change the name, which used to be Home Literacy Coach.

Next, they worked on making the interface more user-friendly. A 15-minute assessment became two short quizzes. Also, many of the activities suggested for kids required school resources, so Read Charlotte worked with nonprofit partners and came up with new activities that are easier to do at home.

To get the word out, Read Charlotte partnered with more than 80 organizations. One of them, BCDI-Charlotte, got the app into hundreds of homes. They also came up with the idea of creating literacy kits to pass out that contained resources for the app’s suggested activities.

“We’ve been excited about it and we’ve kind of picked it up and been able to run with it,” BCDI-Charlotte President Devonya Govan-Hunt said. “Because it puts such an emphasis on where we believe the majority, a lot of the power actually, lies, which is in the home and in the hands of parents.”

About 3,300 pre-K to third grade students have used the Reading Checkup at home since last summer, accessing it on smartphones, tablets, or computers. One of them was Hollis.

“We use this as a supplement,” Burks said. “And she doesn’t feel like she’s in school when she’s doing it. She feels like she’s playing a game. So it’s been really helpful to me.”

Govan-Hunt says this app allows parents to actively engage in their child’s ability to read. When parents are involved, she believes the impact on reading scores will be substantial.

“And that’s what this Reading Checkup allows us to do. Put the control in the parents’ hands.”

The feedback Richardson has received suggests the BCDI message is resonating with the community.

“So in a time when everything was really up in the air, and people are losing jobs and there was all sorts of uncertainty, the way they frame this with parents was to talk about control,” Richardson said. “Although there’s a lot of things in your life that could be out of your control, helping your child with reading … using the Reading Checkup is one area where you can control. And they found a lot of parents really warmed to that message.” 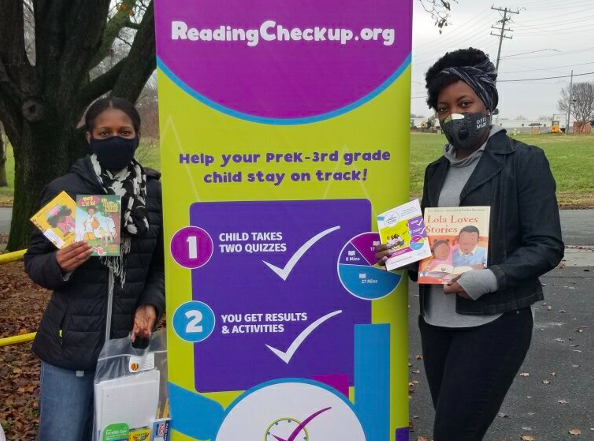 BCDI-Charlotte has visited schools, camped out in front of grocery stores, and set up tables at shopping centers trying to engage families and spread word about the Reading Checkup. (Courtesy BCDI-Charlotte)

Govan-Hunt said this is a particularly important message for Black and Brown communities. In the communities she serves, she said there is a feeling that many schools don’t do enough to engage with Black parents. She noted assumptions about family stress levels during the pandemic or bias against Black and Brown parents’ willingness and ability to get involved in their children’s schooling.

“We believe that we have a responsibility to respond to this reality that we’re existing in by transforming the approach that many people take around family engagement, moving away from a so-called random act of family engagement to one that actually has a lift by the community, or by the village,” she said.

Tiffany Burks was one of those parents. She visited the Melanated Exchange Market in Charlotte last year to buy Hollis some books. In part, she wanted to motivate her child to read during that period when reading felt like a chore.

As Burks walked through a parking lot to the market, a hub for Black-owned small businesses, her daughter veered off toward a table filled with books. She stopped and stared at one book, in particular. The cover showed a Black girl with naturally curly hair, just like Hollis’.

Burks smiled at her daughter’s reaction. She hardly noticed Govan-Hunt walk up beside her.

“She just tears up,” Govan-Hunt recalled of Burks.

Burks finally turned to Govan-Hunt and asked how she could help Hollis stay on track with reading. That’s when Govan-Hunt told her about Reading Checkup. They talked about the power of parents in helping their children read, the importance of finding rich and culturally diverse texts, and how the app could help bolster Hollis’ reading skills and love for reading.

“And she says, ‘Thank you. I’ve never had the opportunity to have this conversation with anybody before,’” Govan-Hunt said. “It was out of fear that her thoughts and her fears were irrelevant, and that people really didn’t have these conversations in the society that we live in today.”

Hollis left the market with three free books from BCDI, and she’s used the app ever since.

“I became afraid that because she was learning from home, she’d be disengaged, and she wouldn’t be as excited about learning,” Burks said. “And that’s where I feel like the app fills in that gap because it’s like, OK, if you didn’t receive this lesson in school, I know you’re receiving it on the app and you like doing the app. So it’s not like I have to force you to do it.”

Rupen Fofaria is the equity and learning differences reporter for EdNC.org