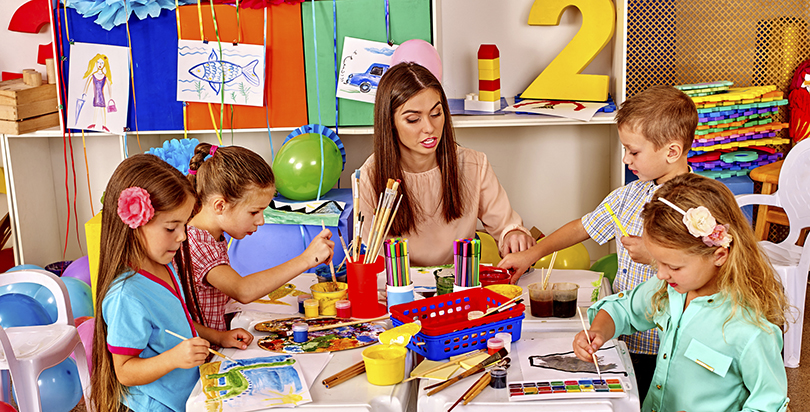 Updated Oct. 7
Implicit bias — unintentionally treating someone differently because of their race or another characteristic — appears to exist among police officers, doctors, job interviewers, K–12 teachers and many others. All of us are subject to the phenomenon.
So it stands to reason that preschool teachers treat black students differently than white students, particularly in light of the well-documented disproportionate rates of discipline imposed on black children.
Indeed, a recent Yale study, released as a research brief — and a slew of news stories that followed in its wake — seemed to confirm as much was happening to kids at the tender age of 4.
“Bias Isn’t Just a Police Problem, It’s a Preschool Problem,” declared NPR. “Yes, Preschool Teachers Really Do Treat Black and White Children Totally Differently,” The Huffington Post said.
In fact, the study found that preschool teachers were just as likely to recommend suspending or expelling a black student as a white one — a fact buried or omitted altogether in news coverage.
The findings of the research present mixed evidence that implicit teacher bias explains disproportionate rates of exclusionary disciplinary measures. That doesn’t mean such bias doesn’t exist, but it does call for a more nuanced reading of the Yale research.
Perceptions changed when teachers learned more
The paper — the full version of which has not been publicly released yet — uses a sample of both white and black preschool teachers, who are first shown a video of two black children and two white children, one boy and one girl of each race. The researchers told the teachers watching to be on the lookout for misbehavior — even though there was none in the clip. Using eye-tracking technology, the researchers examined which students the teachers were more likely to watch.
They found that the teachers, particularly black teachers, paid more attention to the two black students, and were especially more likely to watch the black boy. The differences weren’t huge but were noticeable and statistically significant.
Source: Interview with Walter Gilliam
In the next part of the study, teachers were read a short vignette about a 4-year-old student who has “difficulties napping, following instructions and waiting his/her turn” and who has serious trouble interacting with other students, including “leaving visible scratches on their arms” during recess.
The name of the student described was varied to include stereotypical black and white boys’ and girls’ names (Latoya, Emily, DeShawn and Jake). Teachers were asked to rate the severity of the behavior in the vignette and the likelihood that they would recommend suspending or expelling that student, and, if so, for how long.
On average, teachers were no more likely to recommend suspending or expelling a student who was presumed to be black, contrary to the researchers’ hypothesis. Black teachers recommended longer suspensions and expulsions of students across the board regardless of presumed race.
White teachers were harder on white students, rating their behavior as more severe than black students’. Meanwhile, the black teachers scored black students’ behavior as being worse.
In an interesting twist, these positions flipped when the teachers were given a backstory about the students. Beyond the misbehavior vignette, the researchers read some teachers “background information,” which included describing the student’s “turbulent” home life, a mother who works three jobs, and sometimes “violent disputes” between parents.
White teachers who learned this information rated black students’ behavior as more problematic than white students’ (a reverse of the ratings without the background information). Black teachers, upon hearing the background information, deemed black students’ behavior less severe than white students’. 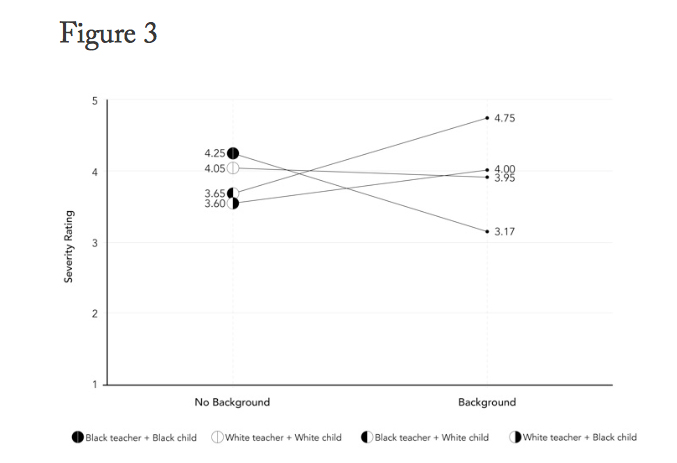 Source: Yale Child Study Center
Researcher: Not finding bias doesn’t mean it isn’t there
The study’s authors, the accompanying press release and multiple media reports take these findings as clear evidence of implicit bias among teachers, helping to explain disproportionate suspension rates among preschoolers.
“Biases are inherent attributes that all humans possess,” the researchers write. “When these assumptions lead to important decisions regarding how we choose to educate our youngest citizen learners, or deny educational opportunities through preschool expulsions and suspensions, the potential for lasting harm is great.”
This is based in part on the eye-tracking findings, which certainly raise questions about why teachers focus more attention on black students. However, the fact that teachers were not actually more likely to recommend suspending or expelling black students is a significant and important caveat. Oddly, the study seems to downplay this aspect of the findings, not mentioning it in the “conclusion and implications” section of the paper.
Lead researcher Walter Gilliam told The 74 that the suspension/expulsion results were surprising, but he offered several explanations. “It’s possible that the reason why is because there’s actually been a fair amount of attention recently … sending out messages to teachers not to be expelling,” he said.
Gilliam also pointed out that suspensions and expulsions are relatively extreme responses to misbehavior, and that implicit bias might manifest itself more subtly.
“Just because you’re not making a response to the behavior, doesn’t mean that you aren’t necessarily making smaller responses to the behavior, such as calling that child’s name more frequently or directing more negative attention to that child,” he said.
This is all true, but since the point of the paper was to explain disproportionate suspension and expulsion rates, this result at least raises questions about the extent to which individual teachers’ biases are a driving factor.
One possible explanation was touched on by the report when discussing the finding that black teachers tended to recommend longer periods of expulsion and suspension: “If Black early educators are more likely to teach in communities with higher proportions of Black preschoolers, and have less access to needed resources, then these tendencies toward greater scrutiny of Black students and harsher discipline in general … may contribute to the increased likelihood of preschool expulsions and suspensions.”
Funding disparities persist in low-income areas — and may even be more inequitable by race — and teachers in poorly resourced schools may be quicker to resort to exclusionary discipline if they lack support for alternatives. Some research has suggested that the likelihood of harsh discipline is driven mostly by school-level factors — including, potentially, resources — rather than individual teachers’ choices.
Turning to the behavior severity ratings, the researchers suggest that the white teachers’ softer ratings for black students amount to “lower expectations.” Then the finding that white teachers’ severity scores are greater for black students after hearing background information is framed as a lack of “empathy.” This was also repeated in some news reports.
This explanation may very well be true, but it suffers from a seemingly shifting definition: lower severity ratings indicate meager expectations, but higher ratings indicate a lack of compassion. It’s not entirely clear what precisely constitutes implicit bias.
At the same time, Gilliam makes an important point: “The evidence of non-bias would be that [teachers] would have similar [severity ratings] — and they don’t. The expectations that teachers have, whether you’re talking about black teachers or white teachers, are not similar for black children versus white children.”
While discussing his own study's findings of implicit bias — and the challenges of research generally in pinpointing something unexplained — Gilliam says, “If you find it, it’s proof that it’s there; if you don’t find it, it’s not necessarily proof it isn’t there.”
This seems to tip the scales in one direction — which is perhaps understandable, considering the evidence on implicit bias in other contexts, though there is still a lot we don’t know about the causes of and solutions to school discipline issues. One recent synthesis of research argues, “While disparities in school discipline by race and disability status have been well documented, the evidence is inconclusive as to whether or not these disparate practices involve racial bias and discrimination.”
At a minimum, results — like the lack of disparity in suspension and expulsion recommendations — that might challenge conventional wisdom ought to be explored in full, considered in the context of other findings, and not ignored or downplayed in media coverage.
To be clear, evidence has suggested that implicit bias among teachers — and many others — is a real problem. It’s just not clear how strongly this study backs that up among educators of very young children.