The Tiny School Project Is About to Get Even Smaller: 4.0 Schools’ New Plan to Reach Edu Entrepreneurs

For Matt Candler, testing new school models should be like opening a food truck. Unlike a decked-out, sit-down restaurant, food trucks can serve customers from the street corner without massive investment or risk.
If the food truck is a hit, scale up.
With this in mind, Candler, the founder and CEO of New Orleans-based education incubator 4.0 Schools, is putting his money where his mouth is. In order to reinvigorate ingenuity in a big way, Candler is thinking small.
On Tuesday, he will announce a new initiative — the Tiny Fellowship — at the South By Southwest Education Conference in Austin, Texas. The new concept follows Candler’s Tiny Schools Project, which gave education entrepreneurs funding and support to help guide innovative ideas to real-world schools that challenged the status quo — even within the education reform community. After some reflection, Candler realized he had been thinking small, but not small enough.
Unlike the previous project, participants won’t have to quit their day jobs to pursue their big ideas. The fellowship aims to spark greater ingenuity with smaller risk.
“We saw so many of those entrepreneurs diminish the boldness of their ideas and simplify it or dilute it and do something that could serve schools immediately, and serve the status quo,” Candler said. “We are going to make our launch program tinier, and the best way to do that is to design it for people to be able to go through it before taking this gigantic risk and quitting their job.”
In turn, Candler said he hopes the program will become more accessible to all kinds of different people at all different stages of life, not just the youngest and most flexible — the demographic that’s typically part of the startup world.
When Candler first launched the Tiny Schools Project, he saw a troubling trend: Even education reformers were focusing too much oxygen on school models that were already tested and proven — rather than following the true essence of innovation.
“Maybe one of the reasons that the charter movement has stalled out is that it actually wasn’t tiny enough, the schools we were starting weren’t small enough to allow the folks leading them to innovate and to create new models,” said Candler, who previously launched more than 30 KIPP charter schools and has held leadership roles at the Center for Charter School Excellence in New York City and New Schools for New Orleans. “Tiny is very much a part of trying to revive that and bring back the original spirit of the charter movement.”
Through the project, school startups will be given a platform to test their models in small environments before becoming full-fledged schools — with feedback from participating families and students along the way. Along with access to 4.0 Schools’ network of startup alumni, the fellowship will give participants $10,000 to test their ideas. These concepts can be new school models or learning spaces like Operation Spark — “the best coding lab in New Orleans.”
“We believe that kids learn best in a combination of more responsive, personalized schools, and learning spaces that are created by educators who are super passionate about a particular concept or idea or area of knowledge,” Candler said.
Even in its previous iteration, people have taken notice of Candler’s approach. In November, he attended the White House Summit on Next Generation High Schools, where he called on 1,000 communities from across the country to create their own small-scale school prototypes — and committed to providing startup capital and training to help those ideas come to life. 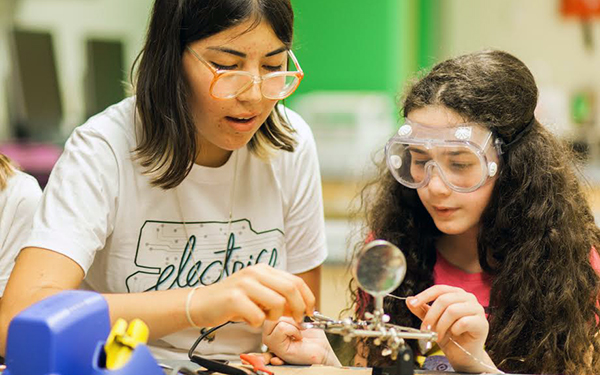 Flor Serna, left, launched Electric Girls, a program that teaches young girls fundamental skills in electronics, programming, engineering, and design, with help from 4.0 Schools. (Photo courtesy 4.0 Schools)
The idea behind the Tiny Schools Project was inspired by two of Candler’s peers: Brian Bordainick and Josh Densen.
One of 4.0 Schools’ first employees, Bordainick spent his spare time building Dinner Lab, which gives aspiring chefs a chance to showcase their work at pop-up locations. At around the same time, Densen, who was among 4.0 Schools’ first cohort of education entrepreneurs, decided to launch a pop-up version of his school — which combines a commitment to educational equity with the maker movement — at a local music festival. Laying toys out on a blanket, Densen let kids play as he explained to parents his vision for a new school.
That project became Bricolage Academy of New Orleans, which emphasizes educational equity and the school’s makerspace as defining characteristics. (Related: How Bricolage Academy and schools across the country are bringing the art of making to K-12 education)
“Josh really is, in many ways, the godfather of this Tiny Schools concept,” Candler said. “This pop-up idea is really the breakthrough idea. The food truck analogy represents a more mature, later stage version of the school where you’re doing repeated interactions with the same families.”
Kicking off the Tiny Schools Project, four education entrepreneurs first went through 4.0 Schools’ three-month launch program, creating pop-up schools to gauge feedback from participating families. These pop-ups then became “tiny school pilots,” which lasted between two and 12 months and served about a dozen students.
Those initial ideas have since become Rooted School, The Noble Minds Institute for Whole Child Learning, NOLA Micro Schools, and 1881 Institute.
“Their schools are evolving faster and staying more innovative because I’ve given them this year to try that out and not have to become experts in running a $1 million company,” Candler said.
Under the fellowship, 4.0 Schools will provide coaching to participating entrepreneurs until they’re able to secure 10 loyal customers. That could be 10 months or a year, depending on how long it takes to create a live prototype with revenue.
“This could be within the context of an existing public school system where those families are showing up and paying with their time or they’re using vouchers, or they’re working in a charter system, or a low-cost private school, or even a homeschool collective,” Candler said.
The first wave of the fellowship will include entrepreneurs 4.0 Schools has already worked with in the past, ones that have been through their three-day workshop and built a prototype for their business. The application process will open to the general public in August.
Through the project, Candler said he hopes to create an ecosystem of new schools that are smaller and more personalized for students’ needs. That’s already starting to happen.
At Noble Minds, which received approval to open as a New Orleans charter school in 2017, teachers and staff will emphasize social and emotional learning just as much as academic benchmarks.
“You can be just as focused on academic excellence and closing the achievement gap as any other school while also wanting to build skill sets in children that impact them personally, and not just academically,” Noble Minds Founder and CEO Vera Triplett said. “The more social and emotional learning skills the students have, the less punitive you need to be.”
Through the Tiny Schools Project, Noble Minds’ concept was tested through summer school and after-school programs at a local charter school. That opportunity had several payoffs. For one, it gave Triplett a chance to test-drive potential teachers, who will come to Noble
Minds with backgrounds in both education and child development. “We were able to identify folks who could do it,” she said, “and then we were also able to eliminate folks who couldn’t.”
Until the charter school opens its doors, Noble Minds will use a grant from NewSchools Venture Fund to continue their “food truck” version this fall at an existing charter school.
The Tiny Schools Project also allowed Triplett an opportunity to prove there was demand in the community. Moving forward, she plans to keep her charter school as tiny as possible so it can become “a fine-tuned engine.”