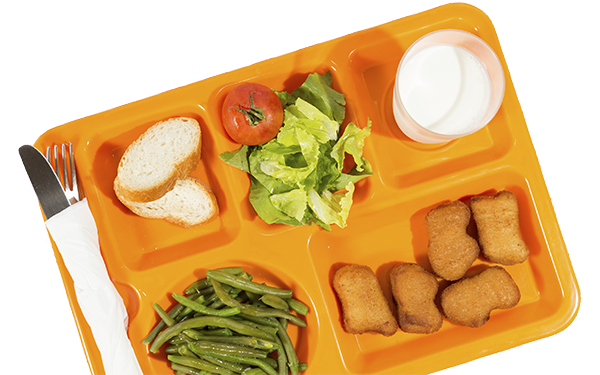 In Maryland, prisoners are fed for $2.20 per meal, which comes to $6.60 per day. The cost of feeding students in Maryland’s Prince George’s County Public Schools is a $1.60 for breakfast, and $3.00 for lunch.
Since breakfast and lunch at school is 20 cents more than breakfast and lunch at prison, the meals must be at least 20 cents better at the school cafeteria than the one in jail, right?
Not so much.
While it’s not clear what the inmates would say, the students in Prince George’s County have already voiced their opinions loud and clear, taking to Twitter last month with photos of alleged lunch food that was served up moldy, undercooked, expired and unidentifiable as anything remotely edible.
“Criminals are getting better food than we are,” senior Tamera Perry told Fox 5 News.

Students begged school leaders for something better to eat.  The school district’s response? They weren’t convinced the photos were of their food.

Students complaining about dreck being served in the school cafeteria is almost a given but social media has allowed more and more teens across the country to expose sub-par (and frankly foul) lunch standards at school. School districts are trying to focus on healthy food offerings while Congress is fighting over renewing the Child Nutrition Act, which in its latest form funded fresh, produce-filled school meals while trying to banish deep-fried chicken nuggets and greasy pizza.

“How we feed our students speaks volumes about how we nourish them as people and as our future”
One of the most innovative school nutrition programs is across the country from Prince George’s in — perhaps no surprise here  — California. At Martin Luther King Jr. Middle School in Berkeley, nutritious lunches have been the norm since 1996. As the inaugural site of the Edible Schoolyard Project, MLK  Middle School has been leading the charge to revolutionize the cafeteria experience for almost 20 years.
Edible Schoolyard was started in 1996 by fresh cuisine pioneer Alice Waters as part of a foundation attached to her Berkeley restaurant Chez Panisse.  Waters was awarded the National Humanities Medal by President Obama in September for her work in school nutrition.
The aim of Edible Schoolyard is to not only put fresh produce grown by a school directly onto a student’s tray, but also to inject hands-on gardening into classroom curriculum. An Edible Schoolyard spokeswoman said this holistic approach aims to nourish both mind and body through a “whole-child educational model which teaches life skills, academics, citizenship, environmental stewardship, and health in a one-acre garden and kitchen classroom.”
Janet Levenson, principal at Martin Luther King Jr. Middle School, told The Seventy Four that Edible Schoolyard “reminds all of us that a federal school lunch program is meant to nourish and feed our most vulnerable students while offering food that is worthy of any student’s appetite.  How we feed our students speaks volumes about how we nourish them as people and as our future.”
And MLK Middle School is not alone in this push. It is part of the larger Berkeley Unified School District, which through its School Lunch Initiative is committed to providing healthy lunch choices along with nutrition education to all students. Though not part of Edible Schoolyard, they have developed their own Garden-Based Learning Curriculum to directly connect classroom learning with hands-on gardening experiences.
Forty percent of Berkeley Unified School District’s students are eligible to receive reduced-price lunch but the district has eliminated the cost of lunch all together for those who qualify. And all students are given access to a completely free breakfast each day through a Universal Breakfast Program.
Berkeley schools may be in the vanguard but many, many others across the country are trying to make changes in light of a public health crisis that counts more than 23 million children and adolescents in the U.S. as overweight or obese.
The Denver Public Schools created model guidelines for using school garden produce in the cafeteria. In Philadelphia, one school has replaced the typical line-and-tray option with a home-cooked full meal served family style through Eatiquette, a program aimed to improve health among children. And a few weeks ago, New York Gov. Andrew Cuomo announced a $350,000 grant to promote farm-to-school programs that bring fresh, locally grown produce to cafeterias.
So how much more is it per pupil for these dramatic upgrades to school lunch programs?  Exorbitant? Actually no. The increased cost for farm-to-school programs is nominal when compared to the costs of student meals in districts that don’t use the healthier model.
The total cost of free breakfast and lunch prepared from fresh produce grown on site by students in the Berkeley Unified school district is $3.75 per day for middle school students and $4.25 for high school, which is lower than the cost of the unidentifiable meals reportedly served in the Prince George’s County Public Schools.
Even Prince George’s is getting into the act  with a program that brings local produce — from Westminster orchard apples to Chesapeake lettuce  — into its cafeterias.
However, efforts to provide schools with grant money to build these kinds of programs has stalled at the national level, where attempts to strengthen the U.S. Department of Agriculture’s Farm-to-School program have been stymied by Congressional inaction.
The Healthy, Hunger-Free Kids Act expired in September without reauthorization, much to the disappointment of activists like the National Farm to School Network, which had been calling for Congress to allot more than $5 million annually to the USDA grant program. Proponents say the money helps families as well as farmers, whose share of the dollars spent on all food consumed by Americans has been cut in half in the past 25 years.
Politics are at issue. Conservatives still don’t like the stricter nutrition standards supported by First Lady Michelle Obama in her fight against child obesity and put in place when the act was last reauthorized in 2010.
Other opponents  — many of them students who prefer the fast-foody, fat- and salt-laden cafeteria selections forbidden by the 2010 legislation — have their own Twitter campaign going, complete with photos of cafeteria lunches. Find it with the hashtag #ThanksMichelleObama.
Submit a Letter to the Editor
October 20, 2015