School districts across the country have dramatically altered how they deal with student misbehavior. From Los Angeles to Chicago to New York City, schools have reduced the frequency with which they give out-of-school suspensions, saying taking students out of the classroom does more harm than good.
A recent analysis of California schools found that suspensions there declined precipitously across all ethnic groups between 2013 and 2015. 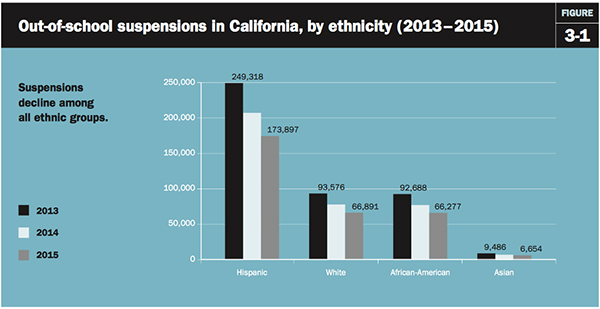 Source: Brookings Institution
Both former secretary of education John King and American Federation of Teachers President Randi Weingarten have done public mea culpas, acknowledging their role in supporting tough disciplinary policies, which they now see differently.
“The students who are most likely to be suspended and expelled are students who we already fail too often,” King, who co-founded a Boston charter school with a strict conduct code, said in a speech last year.
Now a few years in, it remains hotly debated whether moving away from suspensions and adopting alternative approaches like restorative justice has been positive for students and schools.
Using anecdotal evidence and surveys, critics claim that restricting suspensions may have a deleterious effect on school safety and climate, particularly without support, resources, or broader structural reforms. That’s the argument put forth in a report focusing on New York City by Max Eden, a senior fellow at the Manhattan Institute, a conservative think tank that held an April 27 panel on the topic.
“Sadly, the evidence we … have suggests that a policy intended to help minority students has hurt them the most,” Eden wrote in the Daily News.
Yet there are no firm data showing that this is true.
Independent researchers say — and Eden acknowledges — that his analysis cannot show that a reduction in exclusionary discipline caused more negative school climates, including student fighting, mutual respect, and classroom order. In fact, Eden finds that in schools where suspension held steady, there were also declines in school climate — potentially contradicting his argument.
At the same time, the issue of cause and effect plagues many studies cited by advocates for reforming school discipline. While it’s clear that exclusionary discipline is tightly correlated with lower test scores and higher dropout rates — and that it disproportionately affects black and special education students — there are little convincing data showing that suspensions in and of themselves cause these negative outcomes.
Similarly, restorative justice approaches — which emphasize reconciliation of conflict over punishment and are backed by many as a fairer, more effective alternative — have a thin research base.
Careful studies are currently in the works regarding the impacts of the school disciplinary changes sweeping the country. Early evidence and anecdotal accounts suggest that such reforms face a number of hurdles in implementation — especially regarding time, training, and teacher resources — but have the potential to benefit students.
The question likely comes down to the quality of the program put in place once suspensions dwindle.
“When evaluating suspension policies and practices, any impact estimate is inherently a comparison between the existing practice and its potential replacement,” said Rebecca Hinze-Pifer, a doctoral student at the University of Chicago who has studied school discipline in that city. “It is possible we could have dramatically different impact estimates of changing suspension policy depending on the nature of the alternative.”
Weak research that cutting suspensions led to chaos
At the Penn Club in midtown Manhattan, the consensus at the Manhattan Institute’s gathering was that efforts nationally, and particularly in New York City, to reduce school suspensions had backfired. Racial equity, a phrase panelist and conservative columnist Katherine Kersten made a point of putting in air quotes, may be a well-intentioned philosophy, they said, but it simply didn’t work.
Kersten penned an essay earlier this year critical of discipline reform policies in St. Paul, Minn., called “No Thug Left Behind.” It appeared in the City Journal, a Manhattan Institute publication. The moderator delicately referred to the title as “provocative,” but Kesi Foster, of the Urban Youth Collaborative, a group that backs reducing school suspensions, told The 74 that it signals that the author “doesn’t care about the humanity of black people and black youth.”
“The use of the word ‘thug’ in 2017 is not a racist dog whistle, it’s a blow horn,” said Foster.
Kersten did not respond to a request for comment.
The main attraction was Eden’s presentation of his report. He steered clear of such inflammatory rhetoric and acknowledged that there may be good reasons to reduce suspension in schools, but he argued that the research was less definitive than advocates claimed.
“If new evidence from New York City is any indication, discipline reform is hurting the people it’s trying to help and hitting students of color the hardest,” wrote Eden in a March op-ed for USA Today.
Eden bases his findings on an analysis of surveys administered to teachers and students in New York City. Across a number of indicators, students in hundreds of the city’s public middle and high schools reported less safety and order between 2014 and 2016.
The results were less stark for teachers: A survey question put to teachers asked whether order and discipline were maintained. About 40 percent of schools saw the number of teachers who disagreed or strongly disagreed with that statement increase, about 30 percent saw a decrease, and the remaining 30 percent saw roughly no change. 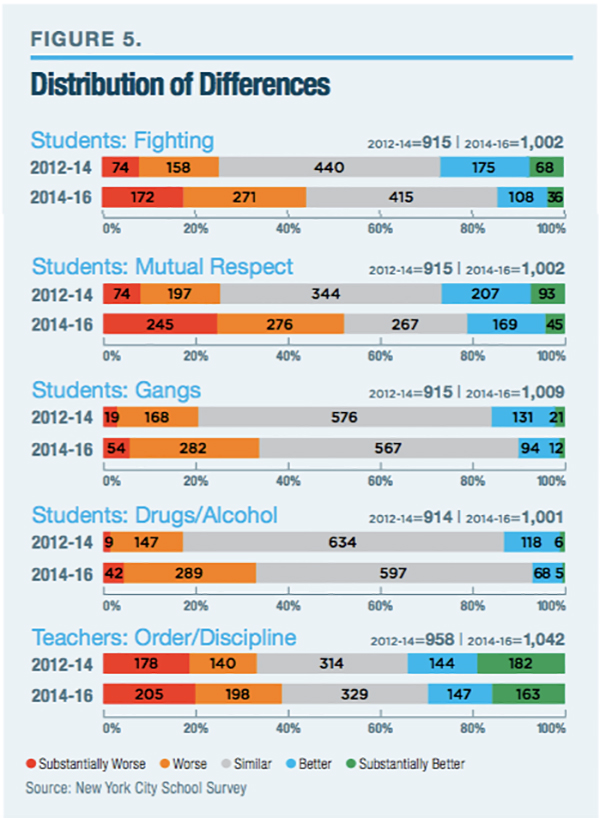 Eden connects these data to simultaneous efforts by the city to aggressively reduce suspensions and promote restorative justice–style practices.

In spite of the implication in the USA Today piece, Eden acknowledges in the report that he can’t directly link the two. “It is a descriptive, not a causal, analysis of school climate and suspension rates, and the results should be interpreted accordingly,” he writes.
Outside researchers agree that this is a limited approach because it can’t isolate the impact of suspensions.
“It’s taking … mean differences [in climate surveys] and attributing those to reductions in suspensions,” said Matthew Steinberg, a professor at the University of Pennsylvania. “We don’t want to rely … on correlational evidence as if it is providing us with a clear, unbiased, or direct effect of suspensions.”
Another problem for Eden’s hypothesis is that between 2014 and 2016, schools that saw their suspensions drop did not see a greater deterioration in their climate than schools where suspensions stayed the same. 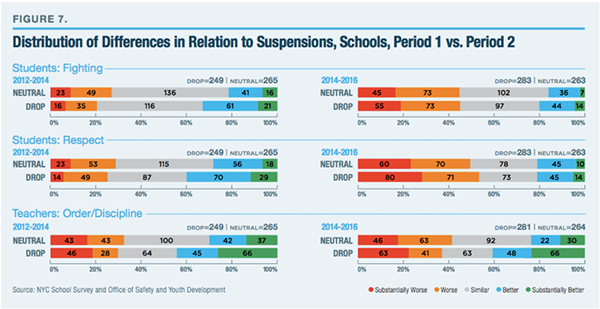 Eden attempts to address this point in the report, saying the key is a change in policy across schools, not simply the number of students suspended.