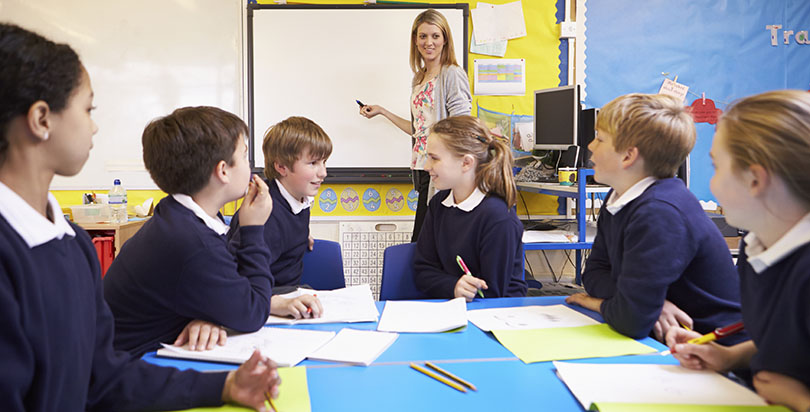 In Los Angeles, a leaked draft of a plan to dramatically expand charter school access in America’s second-largest school district has become a lightning rod development for advocates of traditional public schools.
The war of words intensified last week at the Huffington Post when American Federation of Teachers President Randi Weingarten attacked L.A. charter expansion as “part of a coordinated national effort to decimate public schooling by rigging the system against neighborhood public schools and the students they serve.” Arguing that charter schools had a mixed track record, Weingarten said “a well-regarded Stanford University study found that charter school students were doing only slightly better in reading than students in traditional public schools, but at the same time doing slightly worse in math.”
A prominent critique of Weingarten’s essay (and her use of data) came from Macke Raymond, co-author of that same well-regarded Stanford study. Raymond took strong exception to Weingarten’s interpretation of her findings.
But for those in L.A., these debates involving national figures may ultimately be less helpful than a discussion about research that focuses specifically on the performance of existing charter schools in the city. It's these numbers that add more light than heat to the debate — at least on the West Coast.
And that research shows L.A. elementary and middle charter schools, which currently work with a more advantaged population of students, achieving notably higher test score growth than district schools.
So as Los Angeles wrestles with the vision of the Broad Foundation to increase the number of city charter schools, let’s take a closer look at three detailed studies of the Los Angeles charter sector:
1. Stanford: On average, L.A. charter schools outperform traditional public schools.
Raymond’s Stanford-based organization, CREDO, finds that overall students in Los Angeles charter schools make greater gains on standardized tests in both math and reading than students at district schools.
CREDO, which has produced the most widely cited charter studies, estimates that 48 percent of Los Angeles charters outperform the district average in reading, while 39 percent score about the same and 13 percent do worse. In math, 44 percent of charters outscore the traditional public school average, 34 percent do about the same and 22 percent do worse. 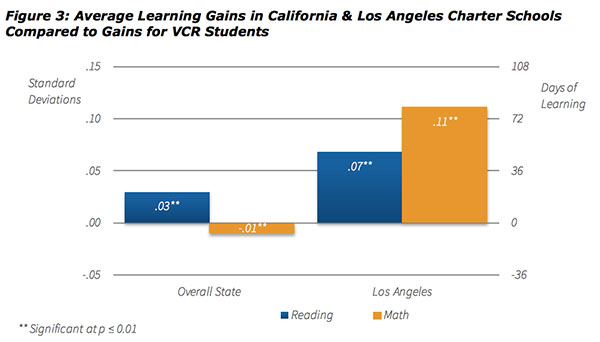 Source: CREDO
While some of the gains are modest, Los Angeles charters appear to be particularly effective in their middle school math results and for students who enrolled for multiple years. Poor Hispanic students attending charter schools did especially well while the impact for black, white, and Asian students was small.
The study used scores between 2010–2012, and showed smaller gains for charter schools in the last year of data. 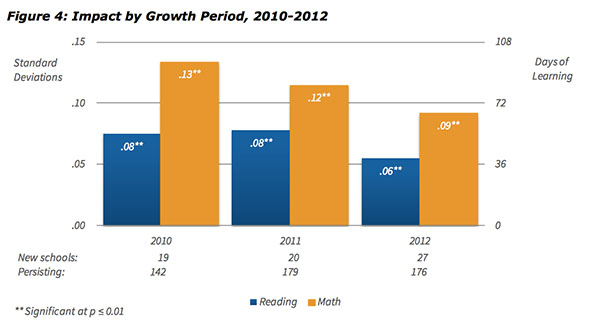 Source: CREDO
The researchers make estimates by comparing charter school students to “virtual twins” — students who look similar on paper — enrolled in district schools. The method is a serious attempt to make apples-to-apples comparisons, but it’s been criticized because it’s not clear that the study can account for what researchers call “unobservable” differences between charter vs. district students, such as levels of parent involvement.1 This is a longstanding challenge in education research, though one review found that the CREDO’s methods lined up with other credible approaches.
2. Berkeley: Charter middle schools produce significant achievement gains.
Another major study on Los Angeles charter schools from the University of California, Berkeley, found that between 2007 and 2011, charter elementary and middle schools were producing larger achievement gains than district schools. No differences were found at the high school level. (This contrasts with an earlier study by the same researchers between 2002 and 2008 showing that charters weren’t doing any better than the district.)
Results were particularly positive in middle school math for students who switched from a traditional public school to a charter school. The magnitude of the effects in the Berkeley study were generally in the same ballpark as the CREDO study. 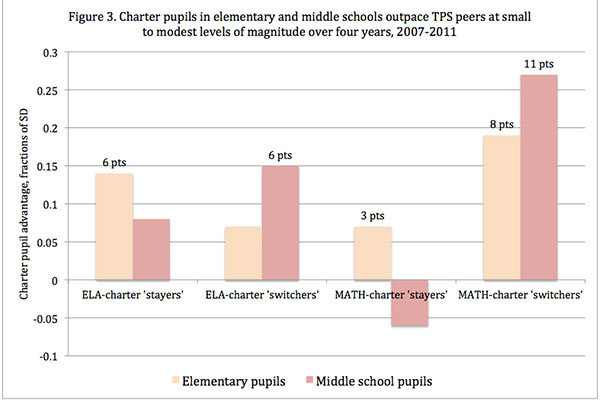 Source: University of California Berkeley
Charter critics still seized on the research because it provided evidence for what many had long argued: that charters were serving a more-advantaged population of students than district schools.
The study found that charter students generally had higher baseline test scores and were somewhat less likely to be economically disadvantaged or have limited English proficiency. This was particularly so for a relatively small group of “affiliated charters,” which are unionized, district-run schools that operate with some degree of autonomy. 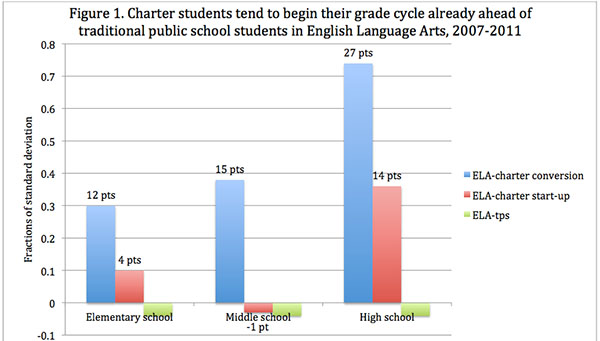 Source: University of California Berkeley
Study co-author Bruce Fuller said, “We are not suggesting that charter schools unfairly cherry-pick stronger students or highly committed families. However, parents with more savvy or time seem more likely to seek out stronger schools.”
Still, the larger achievement gains are not likely because charter students came from families with more money and stronger English skills, for example, since the researchers made extensive efforts to control for such differences.
The California Charter School Association was critical of the study for lumping in affiliated charters — which it calls “charter schools in name only” — with other independent, autonomous charter schools.
The group also raised concerns about the finding that charters serve students with higher baseline test scores since the report relied on tests conducted at the end of second grade. That means, the group argued, that one reason elementary charter school students have higher test scores is because they attended a charter that helped boost their achievement in early grades.
In an email, Fuller acknowledged that this concern — that charter school second-graders had higher test scores because the schools themselves are better not because they started school further along than their district peers — “could be true” but said that the differences in performance were fairly large and so not likely explained by the charters’ effectiveness.
3. UCLA: Students at high-performing charters more likely to score better on tests, stay in school.
Lastly, a small University of California, Los Angeles study found that students who attended high-performing charter high schools had higher test scores, were more likely to stay in school, and less likely to engage in high-risk behavior including binge drinking, drug use (other than marijuana), and unprotected sex. However, the research only focused on three charter high schools — out of 20 in the city at the time — deemed high performing, so the results can’t be generalized to other charter high schools.
Research alone is not going to quiet the controversy over charter expansion in L.A. but elected officials, educators, parents and other stakeholders don’t have to look much beyond their own backyard if they want relevant data to inform that debate.
Disclosure: Both Raymond’s research group and The 74 have received funding from the Walton Family Foundation.
Footnotes:

1. Another concern about the study is that the authors aren’t able to find virtual twins — i.e. ‘matches’ — for all charter school students, meaning some simply aren’t included in the study. For Los Angeles, 93 percent of students had matches. To the extent that the achievement effects for the remaining seven percent vary from the rest, the results may be biased. (Return to story)