The Prison-to-Food Truck Pipeline: How Two Organizations Are Dishing Up Jobs for At-Risk Youth

Inside Jordyn Lexton’s classroom, students were reading the book “A Raisin in the Sun” when one boy asked a question: Someday, could he become an architect?
For a second, Lexton pondered how to respond.
“Yes, yes you can,” Lexton recalls telling the student. “You’re intelligent, you pick up facts really quickly. You will have to work really hard, but absolutely yes.”
Another student in the back of the classroom wasn’t about to buy it. Moments before, he was sleeping at his desk, but Lexton’s answer got him riled up.
“Oh hell no,” the boy erupted. “No disrespect, I really appreciate what you’re trying to do here, but you’re selling dreams.”
At least to some extent, the student was right. They’d soon face an uphill battle to find employment. That’s why Lexton launched the nonprofit Drive Change and built the Snowday food truck to drive previously incarcerated youth into meaningful jobs.
About 1,300 miles south in Miami, Colleen Adams came to a similar conclusion. Though she previously worked in the fashion and magazine publishing industries, she realized she could elevate the power of a shared meal to teach at-risk teens meaningful life skills. Now, she operates the Vibe 305 food truck as a reentry program.
(More: California creates a prison-to-school pipeline)
At first glance, Lexton’s classroom could be in any other school in America. With their books and folders, students sat at rows of about 20 desks facing a scuffed-up whiteboard. But this classroom existed in the shadows of the New York City skyline, encapsulated by razor wire and security guards. Lexton was tasked with teaching teenagers who were in lock-up on the infamous Rikers Island, one of America’s most iconic jails.
On any given day, about 10,000 children are housed in adult jails and prisons in the U.S., according to the Campaign for Youth Justice. About 40 percent of jails do not provide educational services, only 11 percent provide special education, and 7 percent provide vocational training. Most of these children are not “serious offenders,” and 95 percent are released before their 25th birthdays.
Only 13 states provide youth in juvenile justice centers with the same educational services as students on the outside, according to a report by The Council of State Governments Justice Center, yet states spend between $100,000 and $300,000 annually for every single young person held in a secure facility.
Every spring, students with criminal records are often denied admissions to colleges and universities because of their history with the criminal justice system — regardless of their academic potential. But on Friday, the White House and the U.S. Department of Education urged higher education institutions to reconsider using applicants’ criminal records when selecting new students, with several institutions pledging to expand access to formerly incarcerated individuals.
On an average day, about 475 students in New York attend classes at East River Academy, the city education department’s school on Rikers Island. Of those, about 145 are 16-17 years old.
On Rikers Island, Lexton said the students most looked forward to the barbering and culinary arts classes, but those courses were selective. Gym and art classes had already been eliminated. Void of classes that fostered creative thinking, Lexton quit because the school wasn’t building a clear pathway for the young people it served.
“Even students of mine who really weren’t as engaged in English, or math, or social studies, were thriving in these other settings,” Lexton said. “They were super pumped to be in the culinary arts class, super pumped to be inside the barbering studio, and it became pretty apparent to me that these were real channels for them to hone skills, to feel good about themselves, and to really start applying that skill to possible future careers.”
After working for about a year in the Kimchi Taco food truck and a handful of juvenile reentry programs, in 2014 Lexton opened the Snowday food truck, which offers locally sourced fare centered around maple syrup. The truck is part job-training program for previously detained or incarcerated youth, part advocacy arm for juvenile justice reform. (You can find, and follow, the truck on Twitter at @snowdaytruck)

“A restaurant is a brick and mortar,” Lexton said. “You have to wait for people to come to you. For me, the food truck was the most social justice thing about what we were doing because it was like going out and announcing to the world ‘hey, the system is really fucked up, you should know about it, and we should all do something about it together.’”

‘You’re not going to get a job’
Raised by a schoolteacher, Lexton found an interest in alternative education teacher while studying at Wesleyan University. Working for a year in the South Bronx as a New York City Teaching Fellow, Lexton landed a job in 2009 with District 79, the city education department’s alternative education district, and began to teach at Rikers.
Some of the students Lexton taught had been charged with a crime, not yet found guilty, but unable to afford bail. These students — disproportionately low-income young men of color — generally struggled academically even before they were locked up. Without opportunities, Lexton frequently saw the same students back in her classroom.
Lexton sees viable job opportunities and proper education as an outlet to reduce recidivism. Through the reentry program, Drive Change, Lexton offers fellowships to about 20 men and women between the ages of 17 and 25 who generally were released from adult corrections facilities within the last two years.
“I began to think about my own growing interest in social justice reform and wanting more people to be aware of the injustice inside the system,” Lexton said. “I wanted to build a business that would actually teach transferable skills and continued education.” 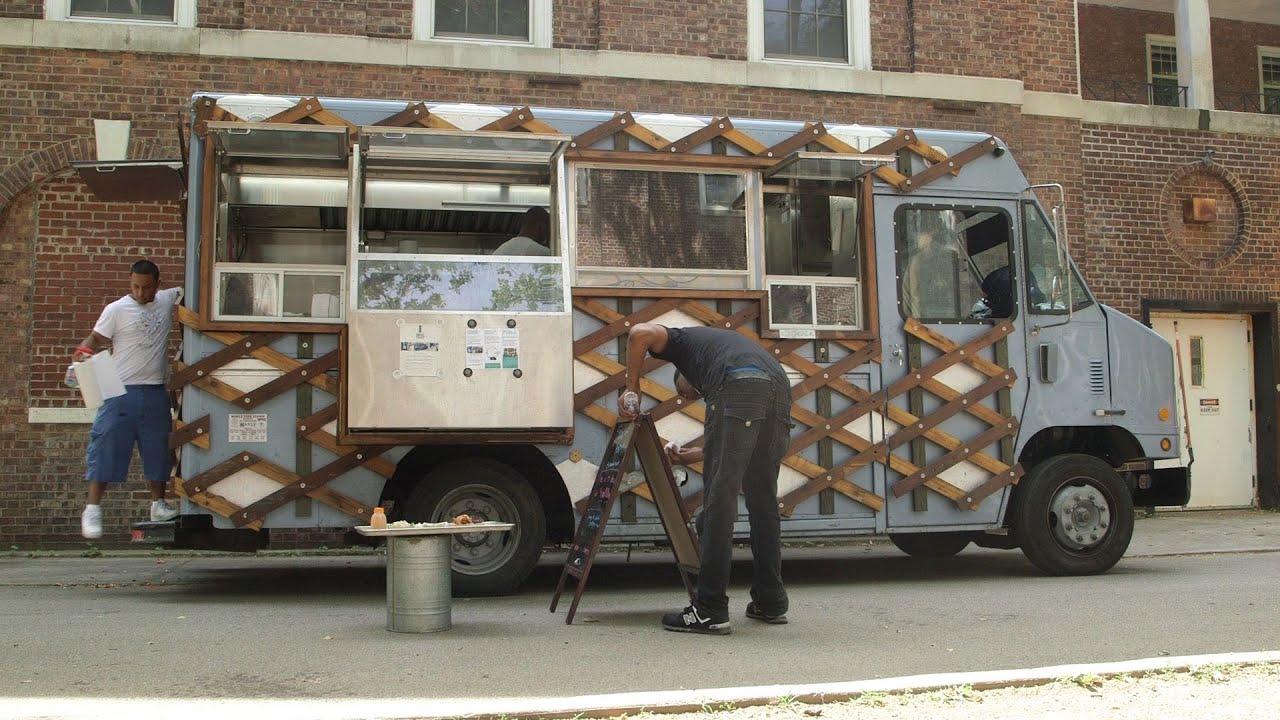 The program starts with a training period where students receive hospitality training, including the licenses and credentials needed to work on the truck. The fellows then work for about 35 hours in the kitchen and on the food truck. Drive Change also teaches an additional five hours each week of professional development.
For Vidal Guzman, a 24-year-old Harlem resident who was arrested for robbery when he was 16 and again when he was 19 for selling drugs, working on the food truck helped him land a job at a bakery in Brooklyn.
“A lot of people when they come home, especially at my age, everybody’s like ‘you’re not going to get a job,’ you know what I’m saying? ‘You’re going to do the same things,’” he said. “I try to go against the odds and be like ‘I’m not going to do that, I’m going to change how people look at me, how people look at anybody who came home.’”
The scene inside the truck, Lexton said, is a contrast to her classroom on Rikers. There’s music, laughter, and a lot of hard work.
“We teach things like applicable, industry-based things such as social media and marketing, money management with a POS system, hospitality, culinary arts skills,” Lexton said. “But we also teach things like communication and conflict resolution, teamwork, and all these different elements that go into just the time we spent together.” 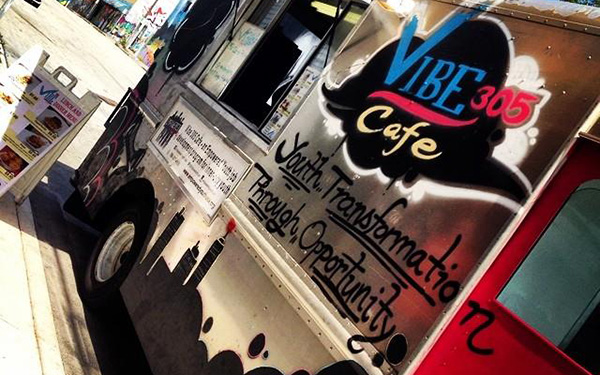 The Vibe 305 food truck serves as a job-training program for at-risk youth in Miami. (Photo courtesy Empowered Youth)
‘Embracing them where they are’
Snowday isn’t the only food truck that’s geared toward educating young adults how to be successful. Through her organization Empowered Youth, Adams operates the Vibe 305 food truck in Miami as an intervention and reentry program for boys who were charged with crimes. (On Twitter at @Vibe305cafe)
As part of their probation, boys are referred to Empowered Youth, the organization that operates the American food-themed truck. The food truck primarily staffs young men who are 15 to 20 years old, Adams said.
“You’re setting kids up for failure if you basically take them off the street or from poverty, from single-parent homes, from very disadvantaged backgrounds and then assume they’re going to integrate and become wonderful employees,” Adams said. “I have an expectation that these boys can take the skills they’ve used to survive on the streets and flip those into honest work ethic.” 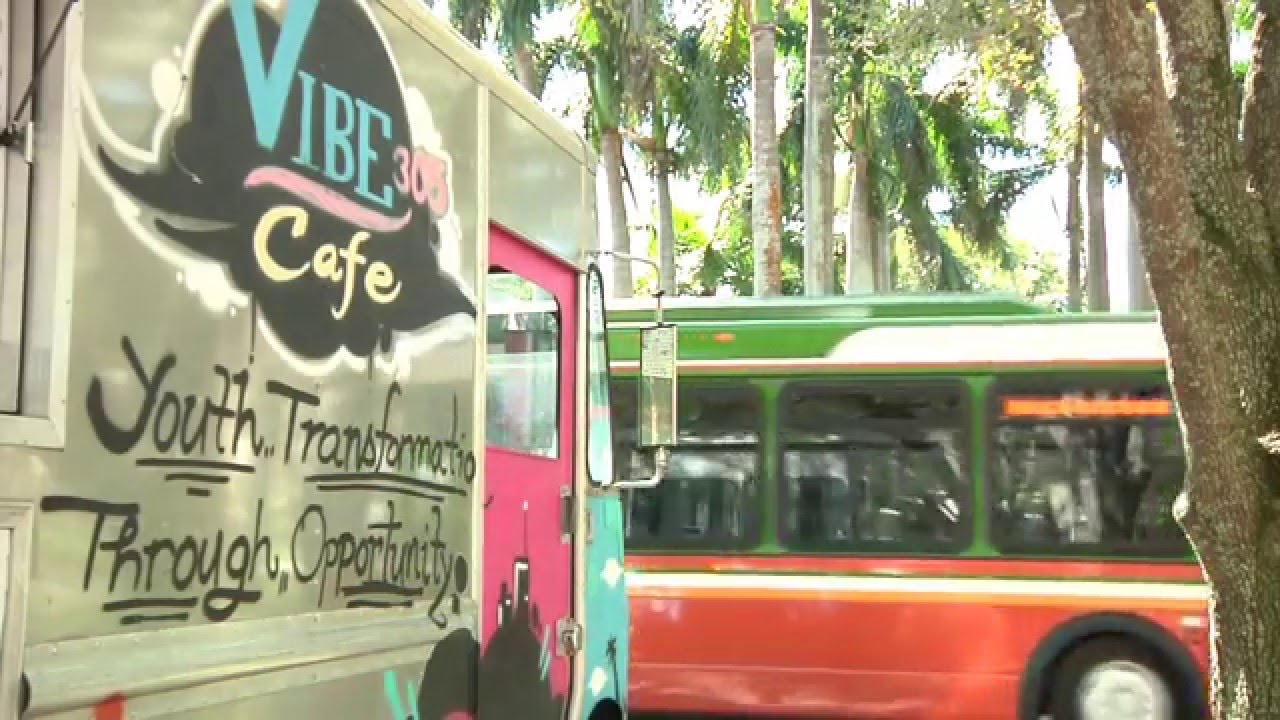 Adams’ program operates in two phases: First is a character development and life skills program followed by job development training, called Empowered Youth Entrepreneurs. Training includes a culinary class once each week that’s taught by a professional chef, an entrepreneurship class at the University of Miami where the young men learn how to develop business and marketing plans, and on-the-job training through the food truck.
“The goal is education, training, opportunity, jobs,” Adams said. “Maybe they haven’t finished school, maybe they dropped out, maybe they’re getting their GED, or maybe they aren’t doing that. They don’t qualify for many of these training programs and colleges and culinary schools. So basically I created a training program that embraced them where they are.”
Combined, the two programs serve about 30 kids, but in the coming years she hopes to add an additional 50 slots by opening a cafe. Similarly, Lexton also has plans to expand in the future — not through a restaurant but through a garage where other food trucks in the city could park, prepare food, and buy wholesale goods. That operation, too, would be staffed by formerly incarcerated young adults.
Previous fellowship recipients now work at other restaurants and catering companies throughout the city.
“One of our fellows was able to move out of his grandma’s house and get his own place,” Lexton said. “So there’s a lot of real life that is happening in a big way, which is a beautiful thing.”
For Jaquial Jackson, working on the food truck led to a job as a subway conductor for the New York City Transit Authority. After a stint at Rikers for selling drugs, Jackson went through the Drive Change program before becoming a manager of the Snowday food truck.
Although he was older than most of the people who go through the program, he can relate to them. He also got in trouble for selling drugs when he was a teenager. He’s always wanted to open his own food truck, and still plans to. Now, he hopes to someday open his truck through the Drive Change network.
“At first I used to look at it like ‘wow, this is a second-chance opportunity,’ but we don’t really like to look at it like that,” Jackson said. “It’s not like you go to jail and this is your second chance-opportunity to get your life back together. It’s about re-educating [kids] and letting them know that, ‘just because you went to prison as a young adult does not mean that life is over.’”