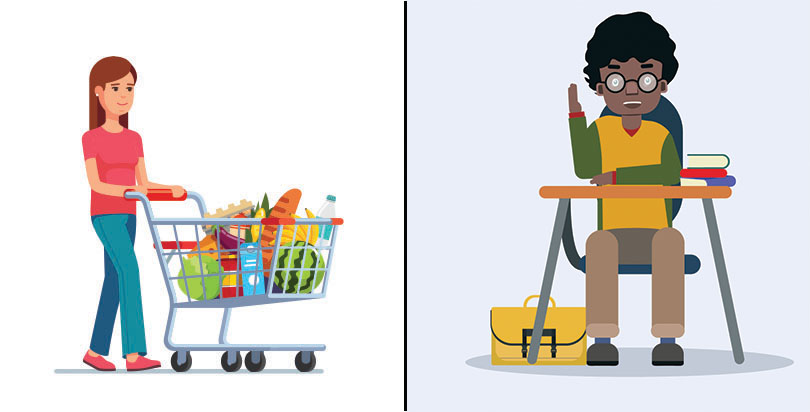 Supporters counter that it’s a necessary lifeline that empowers low-income families, via the free market, to make decisions that best suit their needs.

The program is food stamps, but the description and the critique could just as easily be applied to school choice vouchers.

Some observers see striking parallels between the debate about school vouchers and food stamps, while others point to a number of important differences. The arguments also scramble ideological lines, with conservatives generally supportive of vouchers for schools but skeptical of subsidies for food, while progressives take precisely the opposite view.

Some experts question how you could trust the recipient in one arena but not in the other.

“If you think that low-income moms absolutely must be able to choose their child’s school, then you also have to think that she is smart enough to figure out what groceries to buy for herself,” said Diane Whitmore Schanzenbach, a professor at Northwestern University and director of the Hamilton Project at the Brookings Institution.

Or, some would say, the other way around.

A recent New York Times article highlighted a report showing that sugary drinks, including soda, were among the top purchases using food stamps (or SNAP, the Supplemental Nutrition Assistance Program, as the $74 billion–a-year program is officially called).

“In this sense, SNAP is a multibillion-dollar taxpayer subsidy of the soda industry,” Marion Nestle, a professor at New York University, told the Times.

The article was somewhat misleading, as critics quickly pointed out. Families that receive food stamps use 9 percent of their household expenditures on sweetened beverages, only moderately higher than the 7 percent spent by other families.

Nevertheless, the story helped kick off a flurry of discussion about whether the federal government should create additional rules restricting what can be purchased with food stamps. The program, which provides average benefits of $255 per month, already bars families from buying alcohol, tobacco products, household items like soap, and prepared or hot foods.

The House of Representatives recently held a hearing on whether there should be new limits on what type of food and drinks can be purchased under the program. Usually pushed by GOP lawmakers, such rules have also cropped up in many states as well. Some Republicans want to simply gut the program: House Speaker Paul Ryan last year proposed reducing SNAP by $23 billion.

Supporters, though, say food stamps are effective because they let low-income families make food choices for themselves. Schanzenbach testified before Congress in favor of SNAP.

“A key reason for SNAP’s success is that it relies on the private sector to provide efficient access to food through grocery stores and other retail outlets,” she said. “The reliance of the program on the free-market system has been a feature of SNAP since the beginning.”

Others argue that restricting food stamp benefits is offensive, based on a distrust of low-income people. Annie Lowrey of The Atlantic tweeted that the Times shamed “food-stamp recipients for buying the same stuff all families do.”

For those in the education world, some of this debate may sound familiar.

Supporters of private school voucher programs — often targeted to low-income families — argue that providing public money for education directly to needy families allows them to exercise the same kind of school choice that well-off parents have, and harnesses the power of the free market to improve schools. Advocates also often claim that parents know what’s best for their children — and that arguing otherwise is insulting.

In both instances, there are debates regarding whether the program should exist, and, if it does, to what extent the choices of recipients ought to be regulated.

President Donald Trump campaigned on channeling $20 billion toward school choice programs, include vouchers, and his education secretary, Betsy DeVos, has championed vouchers for many years.
Jay Greene, a professor at the University of Arkansas, argues that recipients of most government programs, including food stamps, aren’t required to meet performance standards — since doing so would be “costly, burdensome, and highly intrusive” — and that school choice programs shouldn’t be either.
“When the government provides food stamps, it does not require recipients to submit BMI measurements or other indicators of adequate nutrition,” he writes. “Yes, food stamps have some restriction on the items that may be purchased, but the program does not require accountability for performance.”
(The 74: Kevin Huffman — Why We Need to Ignore Opt-Outers Like We Do Anti-Vaxxers)
Why the comparison might not work
Catherine Brown of the Center for American Progress, a progressive think tank, argues that the analogy doesn’t hold because existing standards for quality are high for food, but not for private schools.
“We already have pretty strong food safety standards [and] oversight,” she said. “You can’t sell expired milk or eggs — the government is pretty active in ensuring that the food people buy is safe.”
Indeed, regulation may help ensure that nutritional information is provided to consumers and prevent dangerous products from reaching grocery shelves, though it’s not clear to what extent government oversight has ensured quality grocery options in low-income areas.
In turn, the federal government has pushed grocery stores that accept food stamps to stock more healthy foods. This might be analogous to quality control regulations that some voucher programs operate under. Louisiana, for instance, requires students who use vouchers to take the state standardized tests; participating private schools that enroll a significant number of students can be blocked from the program if their scores are too low.
Critics of this approach argue that it over-regulates private schools and could deter them from participating in the program. Similarly, opponents of SNAP regulations say convenience stores that may be the only option in some neighborhoods might stop accepting food stamps because of the new rules.
Another difference, complicating comparisons, is the existence of public schools but not public grocery stores. This is a key point among voucher skeptics, who argue that diverting money to private schools weakens the public system; voucher supporters counter that public schools will improve in response to competition.
Research shows that both sides have a point: school choice programs can indeed cause fiscal stress for public schools, requiring reductions in programs, staff, or even school closures, but some studies find that school districts improve in response to competition. This argument doesn’t have an analogue in the food stamp debate — that is, there’s no suggestion the program will weaken an existing public good.
Meanwhile, some point out that choice may make sense where quality of options is more readily apparent — if, say, quality of food is much more obvious than quality of school. Schanzenbach thinks there might be something to that.
“You can make an intellectually consistent argument that school choice is made infrequently and under uncertainty," she said, meaning it might be reasonable to worry about ill-informed decisions about schools.
Brown agreed. “You go and look at the produce section and think, That lettuce is a little brown, I’m not going to buy it,” she said. “School quality is much more complicated.”
Supporters of free-market choice programs say that parents have the best information on quality. “Not only do parents have the most intimate perspective on the needs of their own children, but they also tend to be savvy consumers of education services and products, which is why parents leave a provider when brand promises are not met,” wrote Lindsey Burke of the Heritage Foundation.
Another distinction might simply be empirical: Does SNAP improve outcomes for participants? Do school vouchers?
Schanzenbach’s research has shown that food stamps lead to both short- and long-run benefits for families and children, such as improved health and higher rates of high school graduation. Others point to evidence that restricting certain uses of food stamps could reduce obesity, particularly in children.
Recent research shows that the use of a school voucher can lead to large decreases in standardized test scores, though older studies paint a more encouraging picture. Greene argues that assessment scores are poor predictors of long-run outcomes, though some studies do, in fact, find a connection between the two.
But one person’s empiricism is another’s paternalism. Perhaps the existing measures — like test scores, in the case of schools — are too limited. Some view choice as an intrinsic good, regardless of measurable outcomes. Supporters of this view point to studies finding that parents who receive a school choice voucher are more satisfied with their child’s school than parents whose child attends a public school. Research shows that parents consider a variety of factors in choosing schools, with academic results being one, but not the only, factor.
Of course, as Petrilli points out, in both debates, few follow the logic of choice to its conclusion — that there should be no limitations whatsoever. Food stamps can’t be used to purchase alcohol, and grocery stores can’t stock food that is poisonous. Private school voucher programs usually have some regulations aimed at stopping financial malfeasance or racial (but usually not other forms of) discrimination. Some choice advocates have pushed for additional flexibility via “education savings accounts,” which allow families to spend dollars on a variety of educational expenses, though even this approach comes with some restrictions.
In fact, to take the idea of choice to its logical extreme would mean ditching vouchers — of the food or school variety — and simply giving families cash that could be used to purchase anything they choose.
Few people in either the food stamp or school voucher camps seem to recommend going that far.
Submit a Letter to the Editor
April 2, 2017