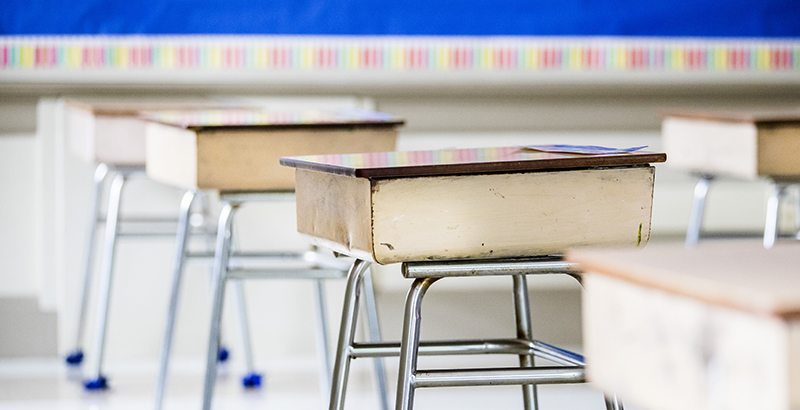 As districts across the United States consider how to get student learning back on track and fortify parent interest in public schools, they’re asking the same question as Steve Joel: What should we keep after the pandemic?

The superintendent in Lincoln, Nebraska, says a district survey this past fall found that 10% of parents liked remote learning – pandemic or not. Nationally, nearly a third of parents say they are likely to choose virtual instruction indefinitely for their children, according to a February NPR/Ipsos poll.

While the end of the pandemic is likely still months off, the White House has called for most K-8 schools to reopen by May, with in-person instruction at least one day a week, prolonging the possibility of distance learning.

Though virtual challenges remain – like teacher burnout and learning loss – some districts are pinpointing remote practices worth keeping. Sifting out solutions from the struggle may help solve chronic problems of quality and equity, say education experts.

“After a moment of disruption – of major disruption – the conditions are ripe for accelerating innovation,” says Richard Culatta, CEO of the International Society for Technology in Education. “We are in that moment now in education.”

Hints of a remote learning legacy are emerging. The digital pivot made some districts solve preexisting tech gaps. Educators explored new social-emotional supports with heightened attention to mental health. And parents have transformed into stronger collaborators in their children’s learning.

Leveraging such changes long term could be a matter of public school survival. Dr. Joel says his district, where a majority of K-12 learners are in person, is experiencing its first school-year enrollment decline in two decades.

“We really don’t want to do remote learning as a stand-alone [option],” says Dr. Joel, who has concerns about the instruction quality of remote learning. “But we don’t have any choice,” he adds, noting that because some parents like remote learning, they might seek alternatives to the district.

To navigate tough choices ahead, he joins district leaders nationwide analyzing what has worked.

One school district in New York state is making inroads into inequities through a new notion of discipline. Remote learning has changed the approach to out-of-school suspension at Shenendehowa Central School District, where more than a fourth of students identify as nonwhite.

Grades K-5 in the district are in person, but middle and high schools are mostly hybrid. With the ability to log into lessons online, students at the secondary level won’t have to miss instruction even if they’re suspended, says Superintendent L. Oliver Robinson. It’s one way pandemic adjustments can address discipline inequities long-term.

During the 2015-16 school year, Black students in the district faced out-of-school suspension at 3.4 times the rate of white students, according to an analysis of federal data by the New York Civil Liberties Union. The disparity was slightly steeper on average (3.9 times) for districts across the New York Capital Region.

Before, out-of-school suspension risked academic setback for students, says Dr. Robinson, since it was sometimes logistically difficult to arrange tutors. Now with virtual options, suspended students can continue learning alongside their class. Though discipline issues declined during the pandemic, suspension remains a deterrent because too many infractions threaten student graduation.

While students ultimately may go back to in-person learning, remote learning will remain a possibility for suspended students “whenever feasible,” he says.

JumpStart was a way to “give back” to students potentially impacted by learning loss and prepare them for college in the fall, says NOVA’s dual enrollment director Amy Nearman. Nearly 3,000 students enrolled, mostly graduating seniors.

The college benefited, too. JumpStart provided a pipeline to NOVA as more than a third of students enrolled in the fall (while community college enrollment fell by around 10% at the start of the school year compared with 2019, NOVA enrollment increased by 2%). The program also bolstered access to learning opportunities at times limited by availability and affordability. With JumpStart, says Ms. Nearman, “all of our students could have the same access to programming and not have to worry about, well, my parents can’t afford it.”

Millions of students still face access issues. But between the start of the pandemic and December 2020, up to 12% of K-12 public school students gained internet connectivity who lacked it previously, and a similar share of students got access to digital devices, estimates Titilayo Tinubu Ali, senior director of research and policy at the Southern Education Foundation.

“We’re really excited” about districts taking this seriously, says Ms. Ali, co-author of a report on the tech gap. “The benefits of digital equity go far beyond education. … They have an implication for how students and their parents’ quality of life will be.”

The researchers found that most of these solutions are short term, however, and will require more funding.

In Utah, the Murray City School District had been slowly developing a broadband network for students for two years when funding from the CARES Act helped the district speed up the rollout. In January, the district activated stronger radio towers that have allowed around 90 students in primarily low-income areas to log on. The district hopes to expand access to all 6,000 students by mid-April.

Now, though five of Jeannette Bowen’s children are back at Murray schools in person, the whole crew can log in simultaneously to the district network to do homework without disrupting their household internet. And the district network is useful when a child needs to stay home from school.

“It’s a reassurance as a parent to know they can get on and they can learn just like their peers in person,” says Ms. Bowen.

“This will be part of our Murray culture now,” says Superintendent Jennifer Covington.

There’s nothing new about trying to equip students with tech devices, but the pandemic spur to prioritize, fund, and accelerate that process will help students for years to come – especially as districts maintain online offerings. One in 5 school systems report that they have already adopted a fully virtual school option, or are considering adopting this in the future, according to the Rand Corp.

Educators in the suburban Chicago North Shore School District 112 retooled after determining that many of the available tech devices weren’t good enough to handle constant use during distance learning, says Superintendent Michael Lubelfeld.

“This was a real awakening,” he says. “We were trying hard, but there were some things that just didn’t work.”

The district put $1.6 million toward new iPads for every student in K-5 and all staff pre-K-8. A standardized inventory shared by all learners “equalizes the playing field,” says Dr. Lubelfeld.

How schools communicate with parents and how they check on the well-being of students have improved.

Tweaks to services for students, for example, resulted from a more empathetic understanding of individual student needs, says Dr. Robinson in New York.

“The question became: How much do we really know our students?” he says.

Based on input from students and parents, educators in his district relaxed rigid deadlines and grades. And teachers were forced to develop more methodical lesson plans that allow both virtual and in-person students to keep up. In some cases, the slowed instruction enhanced student understanding, says Dr. Robinson.

Remote options give students better access to school services like tutoring – something that, by nature, was limited and complex in the past because parents had to schedule pickups and drop-offs, he says. Now, he adds, students have more control than ever over their “academic destiny.”

Offering virtual tutoring followed the district’s realization, he says, about “how much young people were hostages, if you will, to the availability of adults in their lives.”

This expanded sense of possibilities, says Dr. Robinson, could have benefited students even before the pandemic, and is likely to outlast it.

The pandemic has increased mental health awareness, says Dr. Lubelfeld in Illinois. His district began one-on-one check-ins between students and mental health professionals last summer over Zoom, as well as home visits as needed. He expects the practice to continue beyond the pandemic.

“Everybody needs a check-in. And if someone hasn’t been heard of in a day or two, we need to have a triage,” says Dr. Lubelfeld, whose district will transition from hybrid to full in-person learning next month.

That kind of change in mental health awareness is also happening educator by educator. In St. Louis, a seventh-grade language arts teacher adapted her own classroom check-ins.

Before the pandemic, Adia Turner asked her Long International Middle School students to place sticky notes with their name on a “mental health wall” within categories that spelled out different feelings. Sometimes the exercise prompted her to follow up with individual concerns.

With the shift to digital learning, she collects that data through private weekly Microsoft Forms – using memes to illustrate moods – and has expanded her questions to include what they’re grateful for. One student expressed thanks for the “clothes on my back and food in my house.”

Ms. Turner has kept up this “necessary part of our day” even though two of her three classes are back in school.

“The ones who do participate, you can tell they gain a lot from it just by how intentional and thoughtful their answers are,” she says.

Virtual communication has offered an efficient replacement for in-school conferences, which were often derailed by parent work schedules and child care.

Parent involvement is “critical,” says Assistant Superintendent Ebony Lee. And the district, currently fully virtual, plans to continue the academy because of positive feedback from parents like Kimberly Brown-Mack, the mother of an 11th grade student.

The online option is “a lot better for most of us parents who are working,” says Ms. Brown-Mack, a student support specialist in another district. “It is vitally important that parents have access to being able to continue to do virtual workshops.”

New York City’s Success Academy, a public charter of 20,000 students studying virtually, has turned to Zoom for all parent meetings.

“We can much more easily gather parents, explain things, get their feedback when they’re unhappy or upset about something,” says CEO Eva Moskowitz, adding it has bolstered parent partnership.

Because all Success Academy students have school-issued laptops or tablets, that means all parents are equipped to attend remote meetings, which the charter operator plans to continue indefinitely.

“I wouldn’t want to go back to a world where we didn’t prioritize parental convenience,” says Dr. Moskowitz.

Some learners thrive online, but sustaining the progress of all students has demanded flexibility from educators.

“I think we’ve learned how to more individualize and differentiate instruction,” says Dr. Joel in Nebraska. “I think we’ve always been good at that, but I think we became a lot better at it.”

That flexibility is emblematic of a spirit that Ms. Covington, in Utah, says must be embraced: “If we don’t come out of this pandemic learning new ways to do things, it will be our loss.”

Sarah Matusek is a staff writer at The Christian Science Monitor

Sarah Matusek is a staff writer at The Christian Science Monitor.

The 74 Interview: Writer Jonathan Chait on the Democratic War Over Education Reform