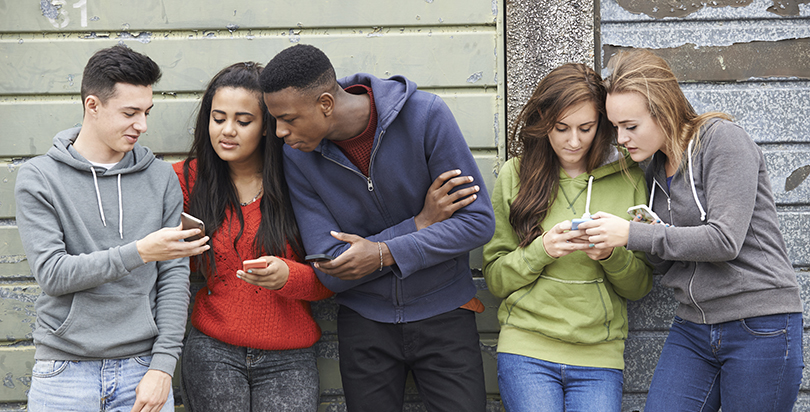 They may not be old enough to cast ballots November 8, but thousands of teenagers around the country are tapping into this uproarious political season through a popular and anonymous mobile messaging app.

After School, a two-year-old app with millions of student users at 20,000 high schools, is hosting a mock presidential election during the last few critical weeks before Election Day.

After School will announce the “winner” sometime before Election Day. The company will also track how teens voted by state and how many sought help registering to vote through partner website DoSomething.org.

The idea is to encourage active citizenship and policy discussions among teens — particularly those who will vote for the first time this year or in 2020, the app’s creators and partners said.

“The earlier you can engage someone in the political process, find an issue that they care enough about … there is a significantly higher — I would expect — chance that they’re going to participate in the process later in life,” said Bart Myers, CEO of Countable.us, a website that analyzes and summarizes congressional bills and connects audience members with their elected representatives.

“For everyone, it happens, I think, at a different point, and usually there’s some catalyst,” Myers added. “Maybe this election cycle is serving as a catalyst for people who support Trump or Clinton. … How do you encounter that moment? Does it happen through social media? Does it happen through a friend or family member? If that’s happening in a way and in a place where someone who is younger can experience it, I think that’s fantastic.” 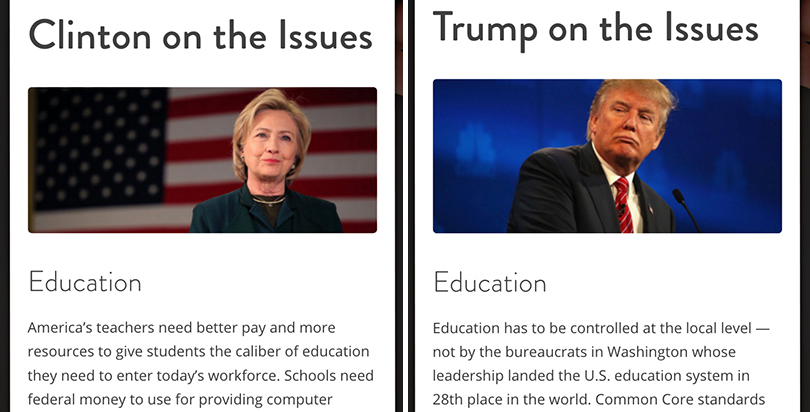 Rustin Rassoli, 17, a senior at the Awty International School in Houston who interned at After School this summer, won’t be old enough to vote in November. But after spending part of his vacation brainstorming with After School developers about how to engage with young people on the issues, he’s excited to share the election feature with his classmates.

“[This election will] inspire this generation,” Rassoli said. “The app gets not just the go-getting kids engaged, because everyone anyway is on the app, so there’s a better chance of normally politically apathetic kids getting involved.”

The app’s central feature is a message board, similar to a news feed, that is linked to an individual high school. After confirming through Facebook that they are enrolled at the school, student users can scroll through and post anonymous messages — frequently revealing crushes, gossiping about enemies and confiding secrets.

The almost-but-not-quite-R-rated interface is designed to capture the attention of teens with raging hormones: A svelte, bikini-clad female figure with a tiger’s face, donning sunglasses, is the app’s mascot, popping up occasionally to direct users to post a message or take some other action. 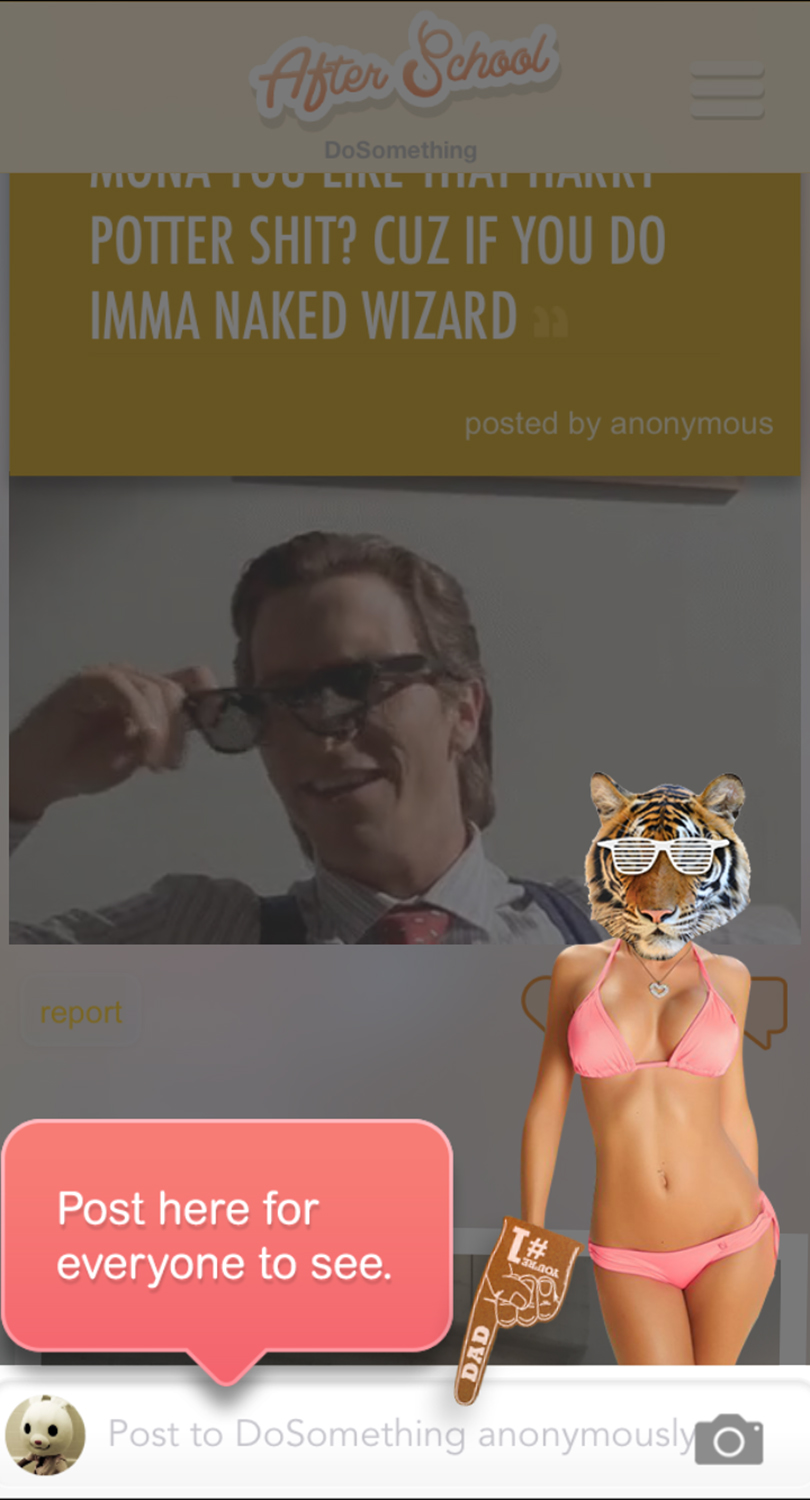 The “vote” prompt that appears in the upper left-hand corner hovers atop hard-to-resist, cheeky icons; once a user taps through to vote for a candidate, the prompt disappears, ensuring only one vote per student, an After School spokesman said.

After School’s creators haven’t made public exactly how many students have signed up for the app, but the spokesman indicated there are somewhere between 2 million and 9 million users. Some 15 million students are enrolled in U.S. public schools in grades 9 through 12, according to the National Center for Education Statistics.

“By helping teens become civically engaged at an early age through the Election Center, we hope to ignite their potential to take on deep-rooted societal problems and make our world a better place,” After School CEO Michael Callahan said in a statement.

Since the app launched in late 2014, developers have made a series of updates to clamp down on cyberbullying, investigate threats made against schools or individuals, and direct teens who might be in crisis to professional resources.

(Read The 74: Crisis Text Line Brings Help to Troubled Teens Where They Live — Their Phones)

Meanwhile, some parents and educators continue to complain that the app enables cyberbullying and that posts contain crude or sexually explicit content. Some districts have blocked the app from their Wi-Fi networks, though students can still sign on using their own data plans.

Plenty of other voter education projects also aim to engage young people in civics, though they generally lack the eye-popping visuals — and the controversy.

The nonprofit National Student/Parent Mock Election will hold its eponymous event for the 18th time this year and, for the first time, will let students and parents vote via smartphones, tablets and computers in addition to traditional paper ballots. Voting is open from October 24 to November 3. In 2008, some 5 million Americans — students from kindergarten to 12th grade, college students, parents and teachers — cast votes, according to the organization, which has received congressional funding in the past.

Newsela and PBS have launched 2016 election-specific sites geared toward teenagers and first-time voters. Student voting in Newsela’s mock presidential election opens October 17. With the help of educators, think tanks, civic groups and news partners, the site created a toolkit for teachers to engage students in the election.

Snapchat has played a bigger role than ever in national politics this season, with both the Clinton and Trump campaigns spending substantially on advertising to target millennials on the platform. The social media app “boasts an audience of more than 150 million daily users, some three-fourths of whom fall into the coveted 18-31 age-group demographic,” Bloomberg reported in August.

After School plans to continue working to engage first-time voters with the help of a yet-to-be-determined voter registration organization. Teens who pre-register to vote through the app’s prompts now can expect to be contacted down the road and offered help with registering for real and locating their local polling site. 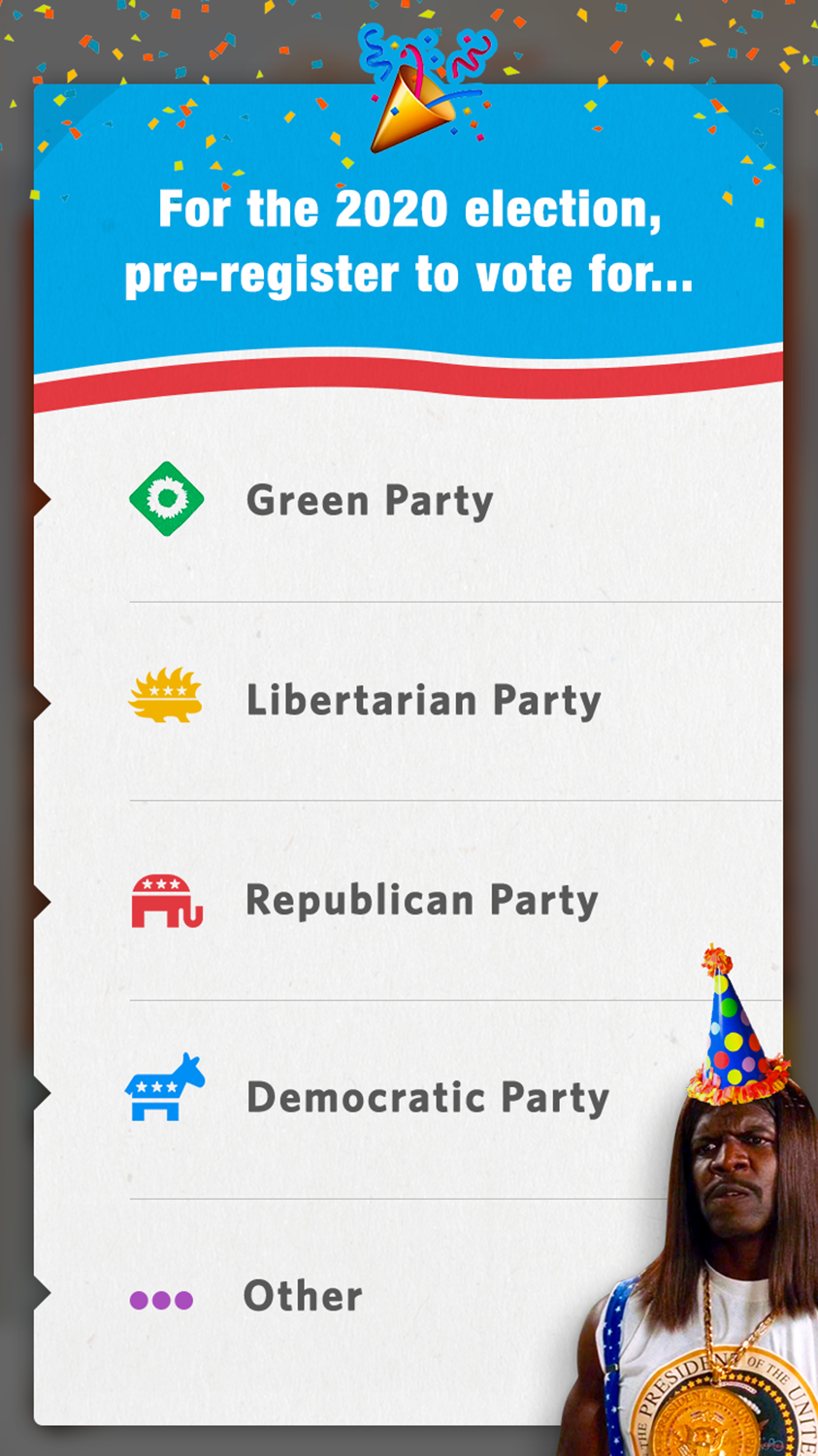 Maryann Ostermeyer, a 40-year civics and social studies teacher in San Diego who once taught Jeff Collins, After School’s vice president of communications and partnerships, said the company’s initiative could resonate with middle school and high school students like hers, who already use After School.

“Kids love apps; they’re always on their phones,” said Ostermeyer, who is retired but continues to volunteer in the Cajon Valley Union School District and the Grossmont Union School District. “This is just a really solid way to reach not just an elite group of kids, but a whole population of future voters, and to educate them in the process and also to give them some sort of buy-in.”