Most of the students in Buffalo, New York, hadn’t been born the last time the city and its teachers agreed on a contract. But they grew up during the years of finger-pointing and stalemate that followed the 1999 agreement, whose perks included free cosmetic surgery for union members.

Attempts to dig out the district after the contract expired in 2004 were met by union distrust, yielding often-bitter negotiations and the longest public-sector collective bargaining deadlock in New York history.

That impasse ended Monday night, when the school board approved a deal both Superintendent Kriner Cash and Buffalo Teachers Federation President Philip Rumore described as a fair compromise. The two men said they were able to work together despite Buffalo’s troubled history and an “adversarial tone and tenor” among both sides’ supporters.

The new deal could be a sign of progress in the sharply segregated Rust Belt city, where just 16 percent of students read at grade level and education politics is often divisive.

“You’re dealing with a very powerful teachers union, so they’re used to kind of getting what they want,” said Cash, the former district leader in Memphis, who came to Buffalo last year with an ambitious transformation plan.

(The 74: The Confident Man: Kriner Cash Says He Can Fix Buffalo’s Broken Schools. Should We Believe Him?)

Its goals included improving relationships with teachers. “We’ve moved away from being adversarial and now into partnership for a common cause: our children and our school district,” he said.

President Phil Rumore talking to the media after many years without a contract! It’s finally over! pic.twitter.com/pcqF4ggTdy

Among other changes, the new contract — approved Monday by a 7-2 board vote — no longer includes the controversial, often-ridiculed cosmetic surgery rider, which will save the district about $5 million annually.

Rumore said the union kept the benefit for negotiating salaries that were more competitive with nearby communities.

The new contract gives teachers an immediate 10 percent pay bump, followed by a 2 percent raise each of the next two years. The district will also create a committee to consider how to reduce class sizes, an issue the union believes is key to improving student performance.

The district was successful in adding 25 minutes to the school day and two days to the school year. And while health insurance was previously free, teachers will now have to pay a flat rate in order to be covered — although less than the 10 percent for which the district hoped.

Under the old contract, Buffalo was the only school district in the area that didn’t require teachers to chip in for health care costs, said Barbara Seals Nevergold, the school board president. 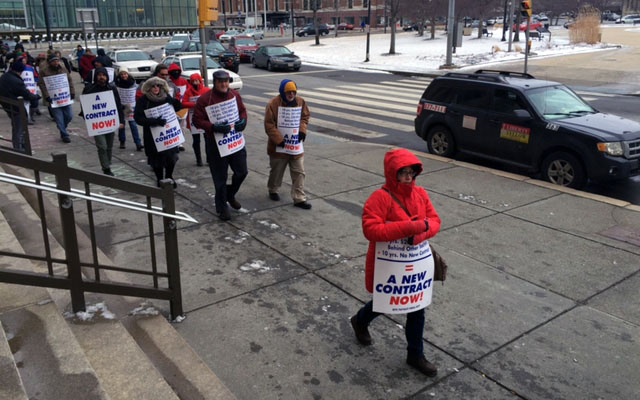 Buffalo Teachers Federation members protest over contract proposals with the Buffalo Board of Education in February outside the Buffalo City Hall. (Photo by Mark Keierleber)

Calling the deal a “win-win” for the district and teachers, Rumore said most educators supported the new provisions. During an all-member union meeting on Monday, some teachers were “screaming and yelling,” he reported, but ultimately “95 percent of the teachers that were there for a voice vote said yes in favor of ratification.”

The union president has led the Buffalo Teachers Federation for decades and had negotiated the expired contract. He said Cash’s participation was critical — unlike that of his predecessors.

“I don’t usually say good things about superintendents necessarily, but it was good to have him at the table, and I’d like to think we’ve developed a good working relationship,” Rumore said. “I look forward to working with him on a lot more important things like things that are going to help kids, like the stuff that we’re supposed to be here for.”