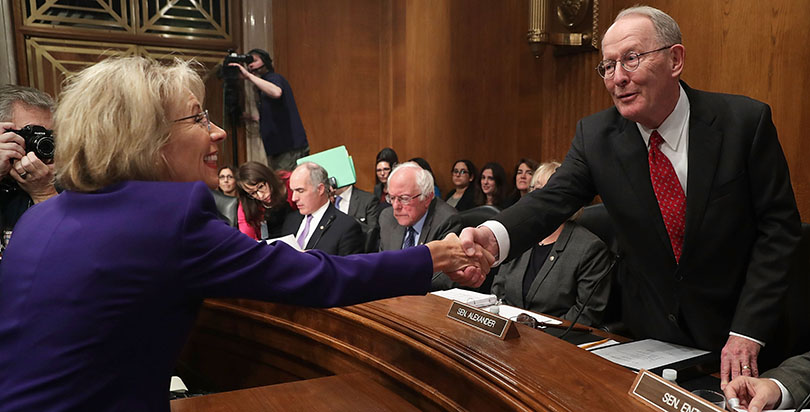 Democratic senators spent the wee small hours of the morning holding the Senate floor in a marathon protest of Betsy DeVos's nomination as education secretary. Their last-ditch effort is not expected to derail her confirmation vote around noon today but it kept alive what has become the fiercest opposition to a President Trump cabinet appointee.
​​​​​​Several big names on education among the Democrats took the graveyard shift late Monday and into early Tuesday.​

​​​​​Sen. Cory Booker, once a school choice ally of DeVos's, talked about the Education Department’s Office of Civil Rights, and the need for a strong federal advocate to protect LGBT children and work to end the school-to-prison pipeline. Sens. Tim Kaine and Chris Murphy spoke overnight as well, with Murphy Tweeting ahead of his 4 a.m. stand, “OK, I’m wide awake and about to start holding the floor in opposition to Betsy DeVos. Tune in, insomniac CSPAN nerds!”

Al Franken pulled an earlier spot, taking the floor shortly before 10 p.m., and recapped his now-famous exchange with DeVos over the difference between measuring student growth vs. student proficiency. (The 74's Matt Barnum explains why many consider this a central education policy debate). In fact, Franken paused his remarks on the nomination to give his fellow senators a background tutorial on the issues, insisting that these terms were so essential to the education space, and so key to the job of education secretary, that DeVos had disqualified herself with her answer.

Just one Republican took a late-night spot to defend DeVos: Tim Scott of South Carolina who make his remarks around 12:45 a.m. Scott, a longtime DeVos supporter who introduced her at her confirmation hearing, said for him the question wasn’t about an individual person. “For me, this is simply about quality education and how we get there,” he said.

By 8 am Tuesday, 31 Democrats had spoken against DeVos's nomination in the final 24 hours. Another three spoke when debate began early Friday morning. Meanwhile C-SPAN reported that Vice President Mike Pence will arrive at 11 a.m. to preside over the Senate and break what is expected to be a 50-50 tie vote.

​Such was the unprecedented nature of DeVos’s nomination that the last day took on the feel of a campaign to stave off an execution. In addition to the Senate "talkathon," opponents held candlelight vigils outside public schools nationwide and teachers unions and other advocates rallied outside the Senate Monday afternoon and evening.

“Of [the] thousands of confirmation votes, I have a hard time remembering any that was like this one,” said Sen. Patrick Leahy, the Vermont Democrat who has served since 1975. Having voted for the vast majority of those nominees, regardless of the president’s party, Leahy said Republicans had rushed through this one over overwhelming opposition.

DeVos has, in the span of three months, gone from a GOP party bigwig relatively unknown outside of her native Michigan to what might be considered the height of political parody — being impersonated by Kate McKinnon on Saturday Night Live this past weekend.

Senate rules allow up to 30 hours of debate after what’s called cloture is invoked. For most nominees, legislators will agree to shorten that debate time. But in this case — as she has been many other times throughout her confirmation process — DeVos is unique, and Democrats required the Republican majority to run out the clock and pledged to “hold the floor” for the final 24 hours starting at noon Monday.

Befitting the drama surrounding the billionaire philanthropist and staunch school choice advocate, Democrats launched the debate using dire tones to describe what was at stake in her confirmation, equating a “no” vote to a form of patriotism. That DeVos will lead a relatively small federal agency and her powers as education secretary have already been intentionally lessened under the Every Student Succeeds Act approved by Congress in 2015 did not get mentioned.

“There are certain issues that are too important, that demand putting country above party,” Chuck Schumer, the Democratic leader, said Monday. Schumer called Republican senators Susan Collins and Lisa Murkowski “profiles in courage” for announcing their intent to vote against DeVos, setting up the deadlock.

Schumer urged other GOP senators to follow suit, and Sen. Patty Murray, the ranking Democrat on the Health, Education, Labor and Pensions Committee, used part of her floor speech to encourage the ongoing deluge of public opposition to DeVos’s nomination.

“I know for a fact there are other Republicans who are feeling the heat and could come around,” she said, rallying advocates to the phones.

The Democrats, along with teachers unions, civil rights groups and other opponents across the country, were desperately — and seemingly unsuccessfully — searching for a third Republican to break ranks and vote against DeVos.

Advocates have targeted around a half-dozen Republican senators seen as still undecided. So far all of those, including Pat Toomey of Pennsylvania, Dean Heller of Nevada, Jeff Flake of Arizona and Deb Fischer of Nebraska, have said they will back DeVos. Opponents held rallies outside several of their home-state offices this weekend anyway.

Pence told Fox News Sunday, “It would be my high honor to cast the deciding tie-breaking vote on the floor of the Senate next week.”

Over the past few weeks — most markedly since DeVos’s fumbles at her January 17 confirmation hearing — advocates have flooded senators’ emails and made enough phone calls to overwhelm the Senate voicemail system. Those who couldn’t get through via the usual methods turned to faxes and, in one case, a message on a pizza delivery box.

DeVos’s supporters have long argued that she is not, in fact, a Darth Vader set on abolishing public education, but instead should be commended for trying for nearly three decades to improve education. Her nomination has turned ugly, they said, because she is a threat to the education establishment, particularly the power and influence of the teachers unions.

Strikingly, though, few Republicans came to DeVos’s defense earlier Monday after debate began. Majority Leader Mitch McConnell gave a brief statement — after a much lengthier one about Supreme Court nominee Neil Gorsuch — saying he had “every confidence” that DeVos would lead the Education Department in a way that put students’ interests first.

Texas Sen. John Cornyn, No. 2 in GOP leadership, said the real issue with DeVos’s nomination was Democrats unwilling to cede authority over schools back to states, local school boards and parents.

“What this fight over this well-qualified nominee is all about, it’s about power … and the desire to keep power over public education in all of our states, all across the country, right here inside the Beltway,” he said.

Last week, Sen. Lamar Alexander, chairman of the committee charged with shepherding her nomination, spoke on the floor on DeVos’s behalf, touting her support from governors and former education secretaries. He also defended school choice, DeVos’s signature issue. “The idea that a low-income child should have the same opportunity or more of the same opportunities that a wealthy family has would seem to me to be a very all-American idea,” he said.

Looking ahead, Murray, who is facing years of combative committee hearings with DeVos, warned Monday that the nominee would come into power without a mandate.

“She would start her job with no credibility inside the agency she is supposed to lead, with no influence in Congress, as the punchline in late-night comedy shows and without the confidence of the American people.”