‘The Kids Come First’: A Day with D.C.’s Principal of the Year 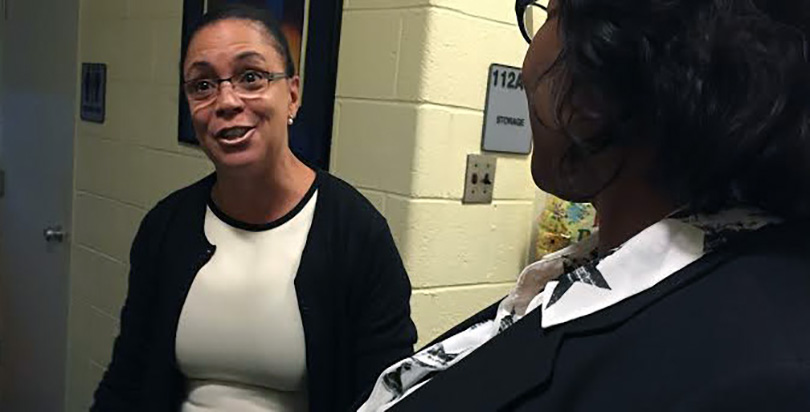 Seaton Elementary School Principal Kim Jackson talks with local media the day she is surprised with the D.C. Principal of the Year award. (Photos courtesy DCPS)

The Seventy Four marks School Choice Week (Jan. 24-30) with a series of stories celebrating educational options and innovation. Read our coverage here.
(Washington, D.C.) — It’s 3:15 on a chilly Thursday afternoon in January, dismissal time at Seaton Elementary in Washington’s Shaw neighborhood. Students, parents and teachers are swarming in the school’s lobby as one little girl, a preschooler, spots her grandmother through the crowd, and shouts, “Another great day!”
Principal Kim Jackson, the person responsible for bringing those great days to the 320 students in the pre-K-5 school, moves throughout the commotion, zipping backpacks and giving pats on the back and chatting with a pair of boys about the  relative difficulty of solving the four-colors-per-side Rubik’s cube vs. the nine-color.
Throughout it all, Jackson carries a Post-It note and marker so she can write down all the questions and concerns the school’s parents and students raise as they head out the door.
On this day, it includes helping a father get a replacement for his child’s city transit card and investigating whether there’s room in the afterschool program for a student who recently returned to Seaton.
Jackson, beloved by parents, teachers, students and her superiors, was surprised this fall when Chancellor Kaya Henderson showed up at her building to present her with the district’s principal of the year award — and made Jackson call her mother so Henderson could share the good news. She and the other honorees — the teacher and staff member of the year, plus the winners of nine other awards — will be honored with a gala at the Kennedy Center on Monday hosted by “Project Runway’s” Tim Gunn.
“She really stands in a league of her own,” said Althea Smith, a reading intervention teacher who has taught under five different principals during her 30 years at Seaton. 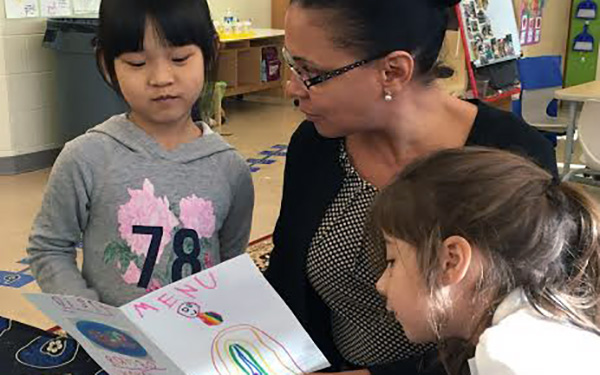 DC Principal of the Year Kim Jackson talks with some of her students at Seaton Elementary school. (Photos courtesy DCPS)
Aileen Murphy, a superintendent in the D.C. Public Schools and Jackson’s supervisor, said Jackson is “the consummate professional and principal.” Jackson often shares credit for the school’s success with her staff, Murphy said, but she is the school leader driving that success.
“Sometimes people like that are overlooked, and she should never be overlooked,” Murphy said. “She really is a talent.”
Jackson came to Seaton in 2012. The Washington-area native, who holds  degrees from Morgan State University and Coppin State College, worked as a special education teacher and school administrator in Baltimore and Illinois. She took the top job at Seaton having been principal at Moorestown Upper Elementary, a school that served about 900 fourth- through sixth-graders in New Jersey.
Jackson has a diverse group of students now under her. The Seaton student body is about 41 percent Hispanic, 35 percent African American, 17 percent Asian and 5 percent white. All papers are sent home in English, Spanish and Mandarin, and the students and staff represent 43 countries. More than 90 percent of students are eligible for free or reduced-priced lunch, a measure of poverty.
“It is my expectation, I should say, that the kids here at Seaton School have the same high quality education as every other student in the District [of Columbia], and whatever we have to do to make that happen for them, that’s what we’re going to do,” Jackson said. “I feel compelled and responsible for them, and like I have to make certain that it happens for them. This is an elementary school, so we are really laying the foundation. We have to do it right.”
Jackson’s day starts early. She usually arrives at the school from her home in Maryland between 6:45 and 7:15. She’ll check in with the school’s custodians or hold meetings with staff, but makes it a point to greet students — she calls them friends — either when they arrive at 8:15 for breakfast or at 8:45 when they head off to their classrooms to begin the school day.
It’s that focus on students above all else that has resonated with parents.
“She won the principal of the year for a reason, and that reason is she cares about the students like they’re her own kids,” said Christina Jackson Thomas, whose daughter, Madison Butler, is in first grade. “She makes this school feel like it’s a home and not just a school. You’re not just coming here to learn.” 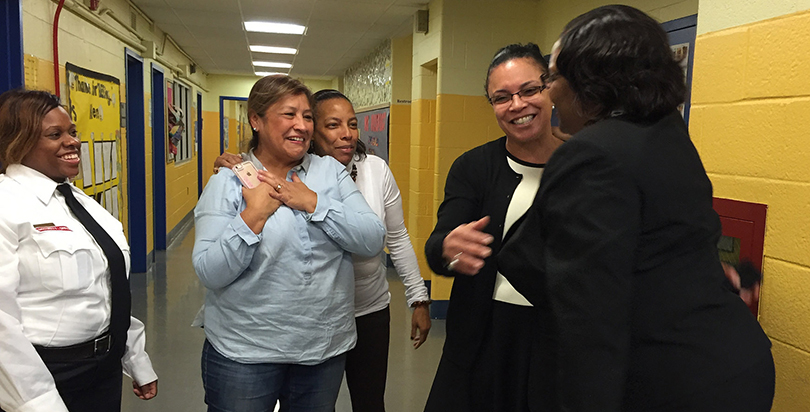