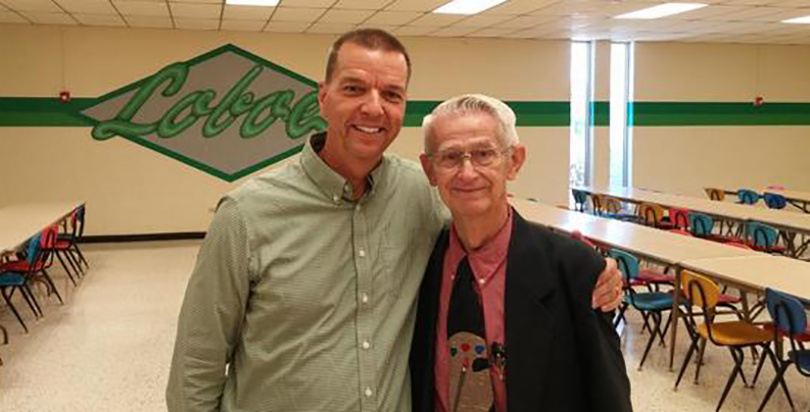 This article is one in a series at The 74 which profiles the heroes, victories, success stories and random acts of kindness to be found at schools all across America. Read more of our recent inspiring profiles at The74million.org/series/inspiring.
Many things have changed in the halls of Texas’ Walker Junior High over the years, but one thing has remained a constant: art teacher Howard Powers.

He’s retiring from teaching after 60 years on the job, already quite the accomplishment. But Mr. Powers’ final days have also been marked by another special feat: He’s maintained perfect attendance throughout his career.

Perhaps what kept Powers coming back reliably, day after day, was his genuine love of teaching. As he explained to CBS 7, the most rewarding part of teaching was seeing students enjoy themselves. The subject he spent all these years teaching, art, offered a special kind of joy. “It’s fun, it’s exciting, and it also leaves a part of you for the people to see. It might inspire them to do something for themselves,” he told CBS 7.

Powers taught over 1,000 students from second to eighth grade during his tenure. One of those students is Walker’s current Principal, Chad Branham, to whom Powers presented a parting gift for the school, an oil painting. (It’s one of the many paintings Powers has donated to his school over the years, leaving behind a visual representation of his dedication and passion)

Unfortunately, after decades of good health, last month Powers was diagnosed with leukemia and pneumonia. But he’s keeping a good perspective, telling CBS 7, “Why get upset over it? Life is too short to worry about little things.”

Powers made an impact not only on his students but on fellow employees as well. “We’re losing a co-worker who is generous, who is kind—we were blessed to have him,” school employee and another former pupil Florenda told CBS 7.

Before he left on his last day, Powers had some final words for his students and colleagues: “I had the privilege of teaching you and learning from you, how life is, and I wish you God’s blessings.”