The Georgetown Scholarship Program: Getting First-Generation Students Acquainted With College Early On 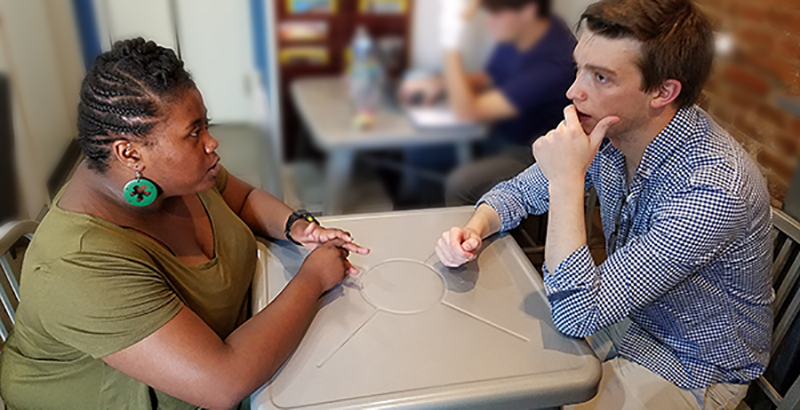 Sitting in a back table at Saxbys, a coffee shop on the edge of the Georgetown University campus in Washington, D.C., Julia Potts and Zachary Kelly may have struck some as an odd pair.

Potts and Kelly were paired up for an “achieve chat” — one of the university’s many services offered out of its Georgetown Scholarship Program, which is designed to guide first-generation college students like Potts through the intimidating waters of a prestigious university like Georgetown.

Between 2003 and 2013, the number of students at Georgetown who received federal Pell Grants aimed at low-income students, like Potts, doubled. The GSP, as it’s known, is Georgetown’s answer for making sure those students earn degrees.

Soon into the chat it became clear that Potts and Kelly weren’t such an odd couple. Kelly may appear preppy, but he grew up in a blue-collar family outside Boston, where his father worked as an elevator repairman. The two were paired together because they share similar majors, and soon Kelly was offering up nugget after nugget about which classes to take which year, how to pursue a double major without exhausting yourself, and pretty much everything an underclassman needs to know.

For a student like Potts, this was pure gold, and you could tell by her intent listening that she saw it that way.

In The Alumni series, most of the focus is on charter school networks that are beginning to send hundreds of minority students from low-income families to colleges, many of them prestigious universities like Georgetown. What do these students, who are often the first in their families to attend college, find?

For the most part, they find a higher education system unprepared for the new reality, where during the past decade the percentage of students using federal financial aid, Pell Grants, rose to 33 percent from 25 percent, said Peter McPherson, president of the Association of Public and Land-grant Universities.

A quarter of the students have children, and 70 percent work while in college — a quarter of those work full time and carry a full course load.

And yet, the federal graduation rate only reports on the success of students who started college as full-time students and never transferred to another institution. A wonderful snippet from the 1960s, but not exactly the real world today.

It should come as no surprise that universities are slow to accommodate this new reality, which means many first-generation college-goers end up fading away before earning degrees.

To be fair, there are plenty of good actors, like Georgetown, but also plenty of bad ones — universities where few first-generation students like Potts emerge with a college degree within six years. According to U.S. Department of Education data, as few as 9 percent of low-income students (as defined by those receiving Pell Grants) end up earning degrees — a dilemma that costs taxpayers $30 billion a year.

When looking at the gap in graduation rates between black and white students, The Education Trust, which gathers data on this issue, discovered that the University of North Carolina at Greensboro exhibits no degree-completion gap between the two groups. In fact, when compared to similar institutions, the black student graduation rate at Greensboro is 18.6 percentage points higher.

Now contrast that with Youngstown State University, where fewer than 1 in 10 black first-time, full-time students completes a bachelor’s degree within six years of enrolling. White students there graduate at nearly five times that rate.

As I made the rounds of the charter networks, it seemed like every network faced a dilemma with at least one university, usually a commuter university that draws their students with the promise of low tuition and the opportunity to study part time while holding down a job. Problem is, of course, only about 20 percent of those students — sometimes less — end up earning a degree.

In Chicago, for example, college counselors at The Noble Network of Charter Schools tried to steer their students away from Northeastern Illinois University, where only 15 percent of Noble-like students earn bachelor’s degrees within six years.

Nationally, The Hechinger Report dug into Department of Education data to uncover which universities had the biggest gaps between graduation rates of Pell Grant recipients and the rest of the graduates. Their findings: At the University of Maine at Augusta, 57 percent of the students get Pell Grants, but only 9 percent of those earn degrees. At Franklin University in Ohio, the comparable figures are 47 percent and 11 percent.

In my interviews with college counselors at the charter networks, two clear favored paths emerged: Any top-ranked college or university is likely to have graduation rates in the 90 percent range, regardless of the student’s background. In short, if you are deemed qualified to study there, the university will find you the supports you need, just as Georgetown is doing.

Surprising, however, was another winning path: Small colleges eager to diversify are often the best places to send students, regardless of their rural location. It may sound incongruous, but the colleges that for years educated the white middle class are the most eager to diversify — and succeed.

Especially for KIPP, Franklin & Marshall College in Lancaster, Pa., gets mentioned a lot. There, President Daniel Porterfield engineered a dramatic shift in who wins spots in the freshman class. The biggest change, and one that many college presidents avoid, is shifting from so-called merit-based financial aid to need-based aid.

Many colleges fear that any shift away from merit aid would jeopardize their average SAT scores, thereby lowering their all-important college comparison rankings. Porterfield feels differently.

“Money spent on price-discounting, on merit aid, wasn’t leading to attracting strong students,” Porterfield told The 74 earlier this year. “Good students, yes, but not near as economically diverse and inclusive as we could be, and as a result, the talent pool wasn’t as deep as it could be. The shift to need-based aid was a good thing.”

Since 2008, Franklin & Marshall has more than tripled its percentage of Pell Grant students. Those students made up 5 percent of the class of 2012, but accounted for 20 percent of the past three freshman classes.

F&M’s special partnerships with both KIPP and the POSSE Foundation generate many of the candidates, but other charter schools profiled in this project also seek out the college for their candidates.

Another key generator is a three-week summer college prep program for low-income students entering their senior year of high school. The students live at the college, take seminar-like courses and meet in small groups with staff and faculty. That gives these students “college knowledge,” Porterfield said. It also gives the students, many of whom grew up in cities like Newark, a sense that they can survive in a rural location far from their urban homes.

“You meet these kids and you realize this country has an amazing future as long as we can actually invest in the youth and bring them together and get over stereotypes that lead us to write people off because they’re from certain backgrounds,” Porterfield said.

The Georgetown Scholarship Program, which over the past 12 years has grown from just 50 students to 650, advises and mentors students but also offers additional grants, usually for expenses that don’t fit into the primary scholarship: things like dental and eye care, emergency trips home for a funeral, and the return trip to Georgetown.

Assistant Director Corey Stewart, known for his “Cookies with Corey” chat sessions, tries to create a community space where students can drop in for free coffee or tea, hang out in the lounge, and perhaps take part in one of the many events, anything from dinners to sessions on how to build your own website.

“It’s cool,” Potts said. “I think I did it three times this semester. You just go in there and talk, and we talk about everything.”

And the program offers “achieve chats” with student mentors like Zachary Kelly, who this past school year was one of eight mentors in the program.

Potts is one of about 35 KIPP students on the campus who are part of the program, which gives her instant community. One fear commonly shared soon after arriving on campus: What if we weren’t really smart enough to come here?

Like many first-generation students, especially minorities, Potts was hesitant to reach out for help. That would only ramp up the insecurities about whether she truly belongs here. “It’s this big-name school and I came from little Newark, New Jersey.”

But after a self-described “bumpy” first semester as a business major, Potts settled down and feels comfortable with her classes, thanks in part to good counseling.

“I had six classes, and that was too much for me to handle, so I had to withdraw from a course,” she said. “I’m doing so much better now. I’m learning to balance things better.”

The graduation rate within six years for GSP students is 96.4 percent — several percentage points above the overall graduation rate. And that’s why college counselors at charter networks strive to get their students accepted at prestigious universities like Georgetown: Once in, they stay in and earn degrees.