The First Word My 4-Year-Old Learned This Summer Was ‘Lynching’: Why I Thought It Was Important to Take My Preschooler to Montgomery 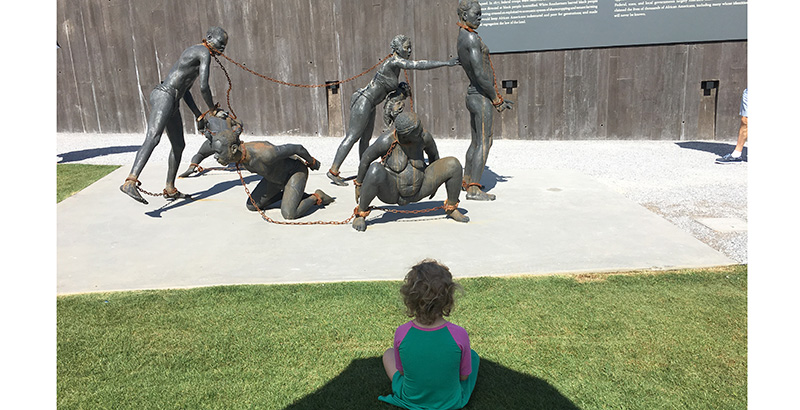 This essay first appeared on The Hall Monitor Blog

The first word my 4-year-old learned this summer was “lynching.”

I took her on a road trip from our home in San Antonio, Texas, to Montgomery, Alabama, to see the Memorial for Peace and Justice. It’s a stunning, six-acre immersive memorial dedicated to the 4,400-plus victims of lynching in the United States. Since it opened in April, I had been trying to find a few days to escape and see it. The opportunity presented itself, and there was an extra seat in the car. So I took my daughter.

There were a lot of reasons not to take her along on my trip. Thirteen hours in the car. The insane heat wave rolling through the South. The likelihood that she would see or hear something too macabre for her tender psyche, never recover, and live out her days resenting me. Or worse, spend the next year sleeping in my bed.

There was also the white anxiety to contend with. Because I’m a journalist, I can usually see a comment section in my head. The terms “inappropriate,” “values signaling,” “white guilt,” “bad parent,” “irresponsible,” and about 100 other criticisms roiled in my brain as we packed the car.

But there was one important reason to make the trip, and that reason won out. It’s the same reason we take our kids to aquariums, to natural history museums, and to church: to engage their minds and souls in things that matter, and to show them the truth.

My kids’ family tree is speckled with white, Southern landowners. Some were slave owners. Some were members of the KKK. Many were genuinely good folks, but all were part of a system of racial oppression that lingers today. If we never tell our children this part of their story, if we continue the tradition of glorifying our ancestors and their order, we do them a disservice. We leave them to get “woke,” without a guarantee that it will happen or do any good.

So I got over myself and hopped in the car.

The 13 hours in the car were broken up by stops along the way to observe the beauty of the South. We stopped in Thibodeaux, Louisiana, where an old friend let us pick tomatoes from the vine and pet some goats.

We stopped for a dip in the Gulf in Ocean Springs, Mississippi, where the bathwater tides were just fine for my girl and the sandbars stretched beyond where we could walk. We engaged in some unparalleled front-porch-sittin’ with our co-pilot’s great aunt in Pascagoula, Mississippi.

We sang along to John Prine’s “Angel From Montgomery.” My daughter knows all the words to that song, and I have no idea what she was expecting from the city, but I’m sure it was grand.

In Montgomery, we were walking along the riverfront when my daughter found a stick. A long, straight stick, perfect for casting spells and drawing in the sand.

As we walked, I explained what we were about to see at the memorial. She dragged her stick, holding my hand. 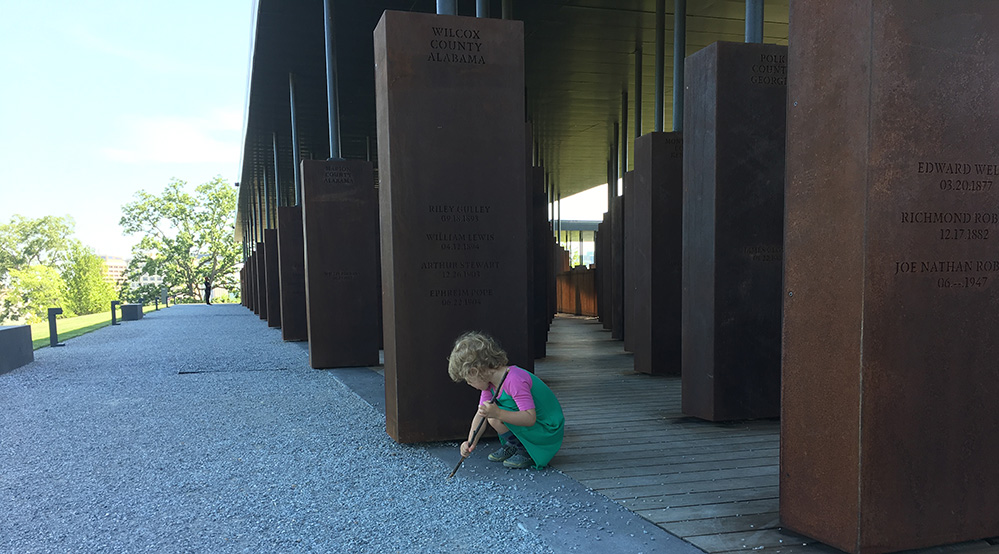 She’s pretty clear on death, even at 4. The deaths of pets and great-grandparents have given her an adequate primer.

Being 4, she’s more confused by the racial terms “white” and “black” — given that those are not the actual colors of our skin — and so, if you ask, she will define lynching as “when people with light skin come and take away people with dark skin and kill them.”

Once we were clear on the definition, I saw the clouds roll in across her little brow. She dropped my hand and spun toward me.

“If anyone tries to lynch people, I will fight them away with this stick,” she exclaimed, waving said stick in my face.

That anger … that’s what I was going for on this trip. I didn’t acknowledge my privilege until adulthood, and sometimes when I feel the spear of justice begin to press against my heart, I recoil in fear, instead of leaning harder into it. Sometimes I can’t bear the shame.

Our kids could be different. Instead of developing their tribal loyalty first, and then later trying to bend history to fit the narrative of the kindly slave owner, what if we started with moral foundations? What if they learned about history and society with their eyes open, without being on the defense? Then, when they place themselves in context, maybe they’ll have a clearer path forward.

When she buys a house, maybe she won’t think twice about leaving her “safe” zip code. When she takes a job, maybe she’ll think about equity instead of striving to lock up her privilege. When she encounters opportunities to help, maybe she’ll ask better questions and give of herself with fewer self-congratulations. 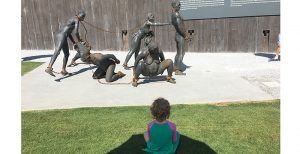 So, the stick came with us to the memorial. My daughter wanted to use it to free the people in Kwame Akoto-Bamfo’s evocative sculpture, the first representative image visitors encounter upon entering the memorial.

So we talked about slavery, how “no one should buy people.”

We moved on; we took a break from talking about the sadness, and just admired the loveliness of the place. 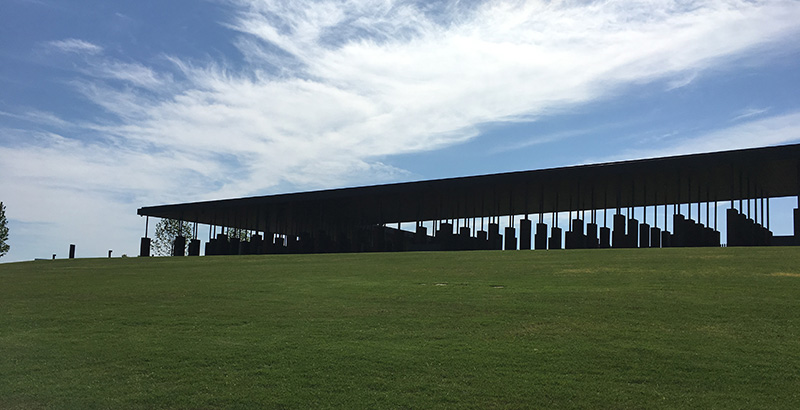 The memorial itself is beautiful and terrible, perched on a treeless hill, its roofline jutting out into the sky like an elbow thrown into the ribs of our national apathy. Hanging below that bold angle, 800 pillars bear the names of counties and states, and below the places are the names of the victims. Some plaques along the wall told stories, linking them to specific places.

In 1887, in Thibodeaux, the same place where we picked tomatoes, dozens of black field workers were lynched for protesting low wages.

Some quick research revealed that none of the stops on our vacation were without a story. Our road trip, like our family tree, was knotted and gnarled with this collective injustice.

In 1901, in Ocean Springs, where we had dipped in the Gulf, Warren Stuart was lynched on the accusation that he had assaulted a white woman.

The front porch we enjoyed in Pascagoula sits next door to the Longfellow House, built by notoriously cruel slave trader Daniel Smith Graham.

Our home, Bexar County, had a pillar hanging in the memorial. It is for Alexander Washington, a man lynched for alleged attempted rape in 1886. The papers at the time reported that the black community supported the lynching, and that “no attempt was being made to discover the parties who did the hanging.” The second statement is probably accurate, and the first is probably far more complicated, if not a blatant lie.

Which led to some reflection on the complicity of the press, and wondering what we will look back on in 50 years and feel ashamed to have printed.

While I walked and read among the Corten steel pillars hanging in the memorial, my daughter used her stick to draw in the dust and gravel along the edge where the roofline cast a shadow in the morning sun. She was getting peckish and tired, and her goodwill was waning. I know her limits, physically and psychologically. To avoid a scene, I let her stay in the shaded gravel.

A docent stood near her, a young, black woman wearing an Equal Justice Initiative T-shirt. I felt, again, that sticky white-person awkwardness, wondering if we came off as cavalier, my daughter sitting contentedly at the edge of a structure memorializing the cruelty her ancestors visited upon the ancestors of this docent. Was it offensive? Was it annoying? Was it entitled, or privileged, or tone-deaf?

When I came to retrieve my daughter a few minutes later, my face must have been battle-ready, because the docent held up her hand to say, Stand down, Mama.

“She’s been working hard to make something for you,” the docent said, cuing me to change my tone. My daughter proudly showed me the gravel etchings she’d been working on.

“She is so special,” the docent said. She told me what they had been discussing in my absence. Just two humans, enjoying the shade on a hot day. Even with history literally hanging over their heads, there was so much grace. Grace that made space for hope.

The memorial alludes to hope as well, in the Dana King sculptures of the women of the Montgomery Bus Boycott. Which led us to explore this idea of segregation … and desegregation.

After the memorial, we visited the Freedom Riders Museum. This was a chance to help my daughter understand nonviolent action and a role “people with light skin” might play in supporting “people with dark skin” in their continuing movement toward justice. Not to make it about us — but to make sure we aren’t trying to rebuild what they’re tearing down. These historic and present leaders showed my daughter (and her mama) that it’s not up to her to wield a stick and save the world. Instead of paralyzing shame or panicky world-saving frenzy of white-person wokeness, the white Freedom Riders suggested we consider stubborn, humble solidarity. Because there’s more hope when we all ride together.