The Cult of Finland: What American Schools CAN’T Learn From International Comparisons 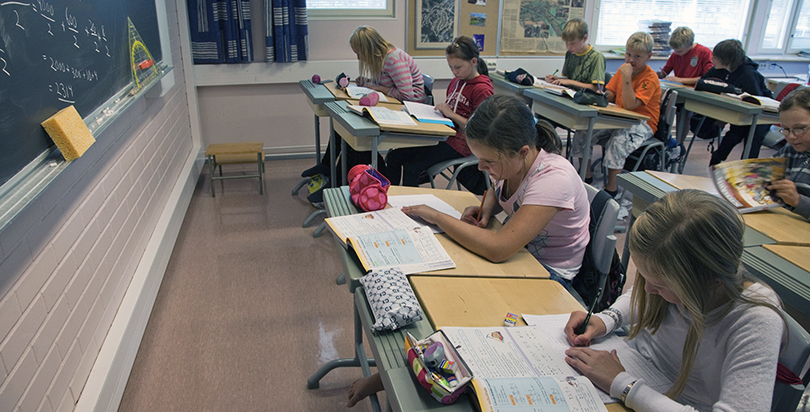 Tuesday’s release of the PISA results — an international test of high schoolers — will almost undoubtedly prompt endless discussion of a mythical educational utopia, where kindergartners are “joyful and illiterate,” where there are no big, bad charter schools or high-stakes testing, where schools are virtually all equal — and where those same test scores are through the roof.
It is called Finland, and many a journalist, policymaker, union leader and education researcher yearns to dwell in this K-12 Lake Wobegon whose virtues are lauded regularly on the pages of high-profile publications and whose methods are praised assiduously during panel discussions at serious conferences. Finland’s education system is sometimes described as a “miracle.”
“I have seen the school of tomorrow,” gushed Fulbright scholar and best-selling author William Doyle in The Washington Post in May. “It is here today, in Finland.”
A recent report by the National Conference of State Legislatures says, “People everywhere have heard about Finland — this Scandinavian country of 5.3 million is a world leader in education. … The hallmark of Finland’s system is its exceptional teachers.”
PISA scores are the touchstone evidence of Finland’s wondrous success.
The story of Finland is undisturbed by nitpicky questions of basic scientific evidence, but those questions exist — and they raise serious concerns about basing education policy on the purported successes of other countries.
The problem is that we don’t know why Finland has high test scores and — even if we did — whether it would be possible to export its policies to the United States.
A Finnish fairy tale
Once upon a time, in a land far, far away, a country known as Finland decided that the key to educational success was to invest in quality teacher training and quality neighborhood schools. There would be no teacher bashing or privatizing charters or competition or Teach for Finland or attacks on unions or test-and-punish.
All of those were distractions from the fundamental work of teaching and learning best accomplished by well-trained, carefully selected, highly respected, deeply trusted, and lavishly supported educators. The Finnish language doesn’t even have a word for “accountability,” apparently.
Teachers and students were focused not on test scores but rather on teaching and learning, which includes play, ample recess, physical education and the arts. Despite little focus on tests, miraculously, Finland dominated international assessments of critical thinking.
And everyone lived happily ever after.
Like any good fairy tale, the story of Finland’s education system is repeated over and over with the same narrative, the same happy ending and the same moral — if only U.S. schools could be as simple, pure and exceptional as Finland’s.
Not so fast
The first problem with this and other international success stories, as a number of scholars have pointed out, is the lack of scientific rigor. Empirical evidence is rarely, if ever, presented to show that Finland’s heavily promoted policies are what caused the Nordic nation’s high test scores.
This is kind of an important detail.
After all, there are countless factors that affect student achievement, and only careful research can determine which educational policies are driving high test scores — if they are at all. Simply picking and choosing “best practices” in Finland may lead to confirmation bias — the tendency to highlight policies folks are already predisposed to support.
As an analysis published by the Economic Policy Institute put it, “Policy recommendations based on the features of high-scoring countries’ education systems, or on the education reforms in countries making large gains on international tests, are overwhelmingly correlational and anecdotal.”
In fact, there’s a specific reason to be wary of the policies promoted by Finland enthusiasts. A study released by The Centre for Policy Studies, a right-of-center think tank in Britain, called into the question the cause of Finland’s educational success and the conclusions of the country’s huge fan base.
“A closer examination of Finland’s results over time reveals that its rise began well before most of the highlighted policies were able to take effect,” the report concludes. “For example, the lack of accountability and the high level of autonomy for schools and teachers are recent phenomena. Up until the 1990s, the Finnish education system was centralised and had little autonomy.”
The report argues that the country’s culture and “complicated and unique history” are the cause of the high status of teachers and strong educational outcomes, rather than prevailing policies.
Trusting the government
Finland is a relatively homogeneous country with a population roughly the size of Minnesota’s. Even if policymakers could determine what factors have led to Finland’s success, there’s no reason to think that its education policies could be easily exported to and effectively implemented in the United States.
Pasi Sahlberg, perhaps Finland’s best-known educational expert, is the author of Finnish Lessons 2.0: What Can the World Learn From Educational Change in Finland? and a former director general of Finland’s Ministry of Education and Culture in Helsinki. He was previously a visiting professor at Harvard University’s Graduate School of Education.

Listening to Pasi Sahlberg talking about "The Next Big Leadership Thing' in Oulu his home town. pic.twitter.com/ZEA4RUlOsc

Sahlberg — who, to his credit, bristles at calling Finland’s success a “miracle” — has criticized the American emphasis on test-based accountability, as opposed to the Finnish focus on training and empowering educators, or “trust-based responsibility.” In a 2013 speech at Harvard, he pointed out that Finns have high levels of trust in their public schools (and, incidentally, police) compared with Americans.
“In my country, we can trust and rely on the institutions called school,” he said. “We can trust and rely on what principals and teachers are doing in the school.”
But what about American history might make some wary as to whether our public institutions — particularly ones run locally — will effectively serve students of color? Why might a bevy of civil rights groups demand strong federal oversight and vigorous use of tests to monitor the performance of schools? How might the United States be different than Finland in this regard?
America’s history of racial oppression, of course, is one answer. There is rightful skepticism of simply trusting states and districts to do the right thing for poor students of color — and there remain many examples to validate this concern.
But in the Finnish fairy tale, such context is largely overlooked.
Look within, America
Of course American policymakers should consider the experiences of other countries — to suggest new policy ideas, look at implementation challenges and form hypotheses about what is effective. The problem is using international comparisons to end the debate rather than begin it.
Policymakers ought to review international ideas, sure, but then examine the rigorous evidence from the United States before deciding if a policy is worthwhile. Fortunately, there is a large evidence base to draw from using research in the United States. And indeed some lessons from Finland should be taken to heart.
For instance, a large body of research suggests that ensuring resources are adequately and equitably distributed to schools in poor areas has large, beneficial effects. Moreover, Finland’s low child poverty rate, which is due to its expansive welfare state, seems worth replicating; the deleterious effects of poverty on child development are substantial and well-documented in the United States. Reducing poverty simply by giving families cash so that they are no longer poor produces gains in educational achievement and attainment.
In other respects, though, it would seem unwise to follow Finland’s lead. The research from the Economic Policy Institute, criticizing international comparisons, advises policymakers to instead look at effective practices among states within our own country.
The authors ran careful statistical analyses and found that “Students in states with stronger [test-based] accountability systems do better in the [federal] math test, even though that test is not directly linked to the tests that are used to evaluate students within states.”
Several other studies have come to similar conclusions.
Maybe Finland, which has seen international test scores drop in recent years — yes, that’s right — could learn from the United States’s approach to accountability in this regard. But, of course, the Finns should be careful in replicating policies from a completely different country.
The evidence base in the U.S. for “raising the bar” on teacher preparation à la Finland — by making admission to and training in teacher-education programs more rigorous — is also shaky. The problem is that there’s not much basis for determining how to improve teacher training, as there’s usually minimal variation between different programs
That’s all to say that taking promising ideas from other countries and trying them out is well and good. But buying into ill-defined “best practices” without rigorous science or clear ability to translate into a different context makes no sense.
Education policy should be made based on evidence, not fables.
The end.
Submit a Letter to the Editor
December 4, 2016