The Concerning Case of Cleveland’s No-Show Students: More Than 8,000 Kids Are Missing From City’s Online Classes as Absenteeism Rates Double 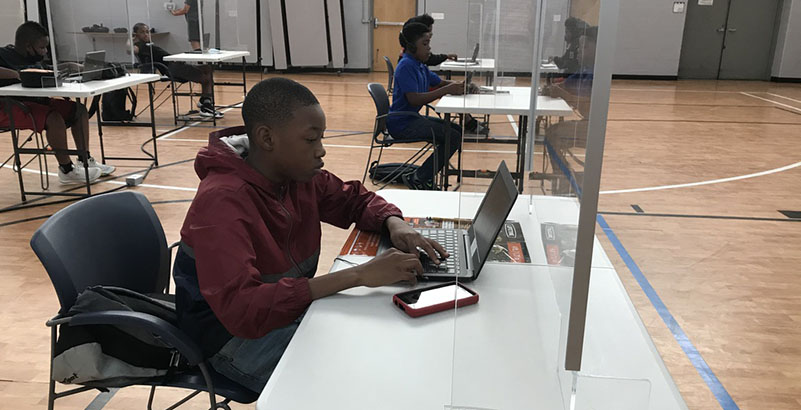 Cleveland school district students have participated in online classes when at the learning centers created around the city to help them connect. But thousands aren’t connecting from home, an analysis of district attendance data shows. (Patrick O’Donnell)

Thousands of Cleveland students aren’t showing up for daily online classes — skipping class, dropped off the rolls, or never enrolled at all, data analyzed by The 74 show.

That means a district with 36,900 students last school year now has about 28,200 attending classes on a typical day, a drop of more than 8,000, the district’s data show.

A few schools marked 100 percent of students present every day this fall – schools that in a normal academic year would have an attendance rate of around 80 percent.

“It’s distressing,” said Kurt Karakul, who heads a partnership between service organizations to help students in one of Cleveland’s poorest neighborhoods, adding that low attendance and participation in classes make this school year almost a lost year. “I think, unfortunately, there are kids that have sort of just disappeared.”

Cleveland schools have long had a problem with attendance and chronic absenteeism. It has consistently been near the bottom of the state in both measures, and even had a citywide campaign in 2015 to improve attendance, with modest success.

COVID-19 has made a bad situation worse.

The decreased class participation this year drops the district’s attendance rate to 81 percent, about 10 points lower than the 91 percent the district had last year. Instead of 9 percent of kids skipping class, 19 percent are now absent.

The 8,700-student gap is the result of a combination of factors.

About 1,500 of those are kindergarten and preschool students, whose parents, nervous about sending kids to school in a pandemic, never enrolled them this fall.

The whereabouts of 600 students who never returned to school and are not enrolled are a mystery.

State data does lay out where 300 kids are: 100 students moved to parochial schools and about 200 to charter schools.

That leaves more than 6,000 others enrolled, but not showing up for class. 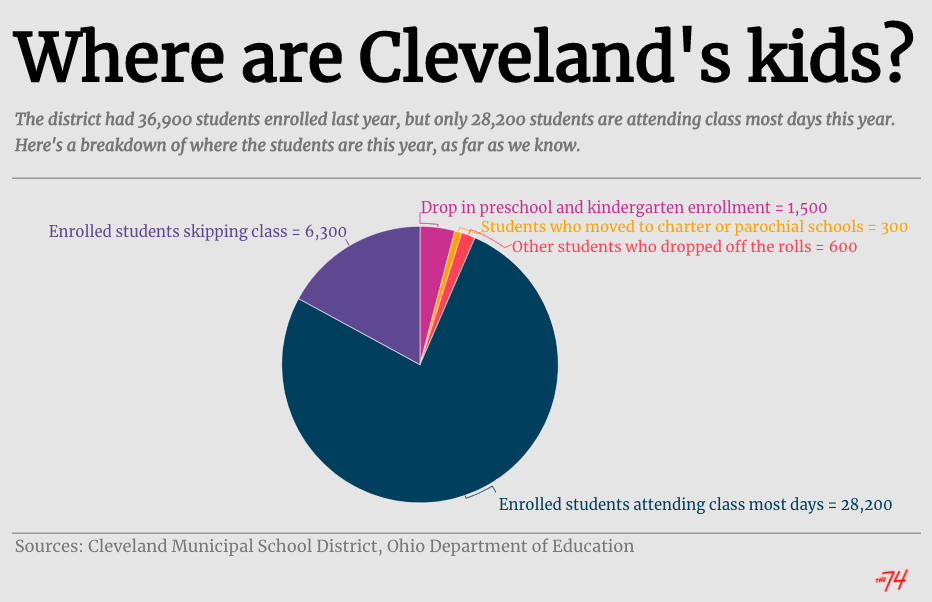 Cleveland Teachers Union President Shari Obrenski offered an explanation that matched what The 74 heard from parents in neighborhoods across the city.

She said the no-shows seem to be a mix of kids who never log on and of those that attend one or two days a week. “While I think we are making the best decisions for health and safety in our community, we are going to have some real work to do when we get back in person,” Obrenkski said.

The 74 has requested comment from the district on the enrollment and attendance numbers since mid-November, but officials have said little. Cleveland Mayor Frank Jackson, who appoints the school board, also did not respond to requests for comment.

The district would only confirm the enrollment drop, adding that the 10 full-time staff that usually meet with families to improve attendance and enrollment have shifted to trying to find missing students.

Among their strategies: calling parents, knocking on doors, contacting other school districts and the state Department of Child and Family Services, and checking social media. The district offered no comment or detail on how those efforts are going.

Others that are trying to find absent students say it’s a struggle.

“We have contact info, have texted, emailed, called, and even visited their last known address, and we can’t find them,” said Earl Pike, executive director of University Settlement, a Cleveland social service organization. “That’s so troubling.”

Students and parents reached by The 74 had a similar explanation for low attendance. Kids are just skipping class.

Lemere Ferguson, a student at Walton elementary school said he likes his online classes, and logs on for them every day. But nearly half his classmates don’t show up. 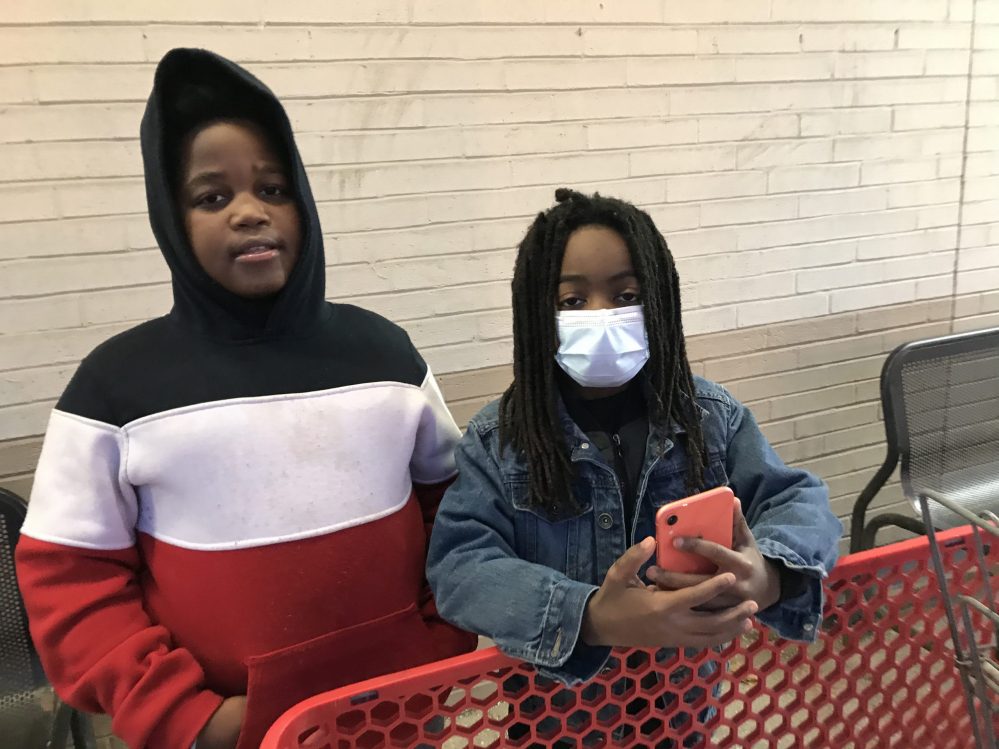 Lemere Ferguson, left, says classmates at Cleveland’s Walton elementary often don’t log on to classes or they play games on computers instead of learning. (Patrick O’Donnell)

Tito Lopez sees something similar when he helps his first grade son with online classes for Denison elementary school.

“A lot of kids ain’t doing it,” Lopez said. “There’s only a couple in the classrooms. There’s only three or four.”

Malika Campbell, a mother of three district students, said she understands parents feeling tired and not having the energy to make sure their kids are online.

“That shows that you didn’t even try as a parent,” she said. “They should at least be logging on.”

Cleveland’s not alone in having attendance problems this year.

A national survey this fall estimated that twice as many students were skipping school this year than previously, though for most schools that meant a drop from around 95 percent attendance to 90 percent.

Cleveland’s drop from 91 percent to 81 percent attendance fits that doubling pattern, just on a much larger scale, as does Detroit’s drop from 90 percent to 78 percent. The two cities routinely trade places at the bottom of national rankings of poverty and socioeconomic challenges.

“It is very concerning,” said Johns Hopkins University professor Robert Balfanz, a leading researcher on the damage that absences cause.

“We are looking, particularly in the high poverty districts which have been hit the hardest by COVID-19 health, economic, and education impacts, at unprecedented numbers of students, who will need additional supports and opportunities to learn, to re-connect to school and get back on track to school success.”

She said two efforts by California and Connecticut to aggressively track and report enrollment and attendance issues during the pandemic are highlighting how poor, disabled and minority students are disconnecting from school more than white and affluent students.

“These are the same students who lack the resources to help make up for learning time lost in the classroom,” Chang said.

Cleveland’s attendance data isn’t as simple as just looking at how many log on to online classes, as other districts have done. Officials added Clever, a learning management system, this year to monitor students’ online activity. But district CEO Eric Gordon has told the school board that students are bypassing Clever and signing on to classes on applications like Zoom or Google Classroom directly, instead of through Clever. That prevents the district from accurately tracking online participation.

The district is relying on teachers to mark students as attending, either by participating in synchronous classes, communicating by chat or email or doing assignments. Gordon has urged teachers to be lenient and accept most any participation as attending.

But the accounting is inconsistent. A few schools marked 100 percent of students as attending every day this fall in the data provided to The 74. Those included traditionally low-performing high schools like East Technical High School and John Adams College and Career Academy, with about 500 students each. Those schools had 78 percent and 83 percent attendance last year, respectively, pre-pandemic.

The district also shows an overall spike in attendance to about 31,000 on Wednesdays, days with no synchronous classes and which are set aside for conferences and catching up on work. But more than a dozen schools with enrollment totaling nearly 5,200 students reported 100 percent attendance every single Wednesday, as if it was the default and not a real measurement.

The district would not explain clearly why this happened.

On the whole, high schools had much lower attendance than elementary schools, with some high schools reporting less than half their students attending on many days. Attendance at Collinwood High School and John F. Kennedy High School, neighborhood schools in low-income neighborhoods, typically ranged between 30 and 50 percent.

Magnet high schools like the Cleveland School of Science and Medicine or Early College High School had attendance well into the 90s, however.

But attendance is still a challenge, even for the stronger schools.. A teacher at one high school with high attendance said he has to call one student every morning to wake him up for class because his mother is at work.

“She is a good parent, but she just isn’t at home” said the teacher, who declined to be named. “She and I are working together for the kid.”

“We have good kids,” he added. “But COVID has exposed how little support our children really have, and we can’t be there to pick up the slack because we are remote.”