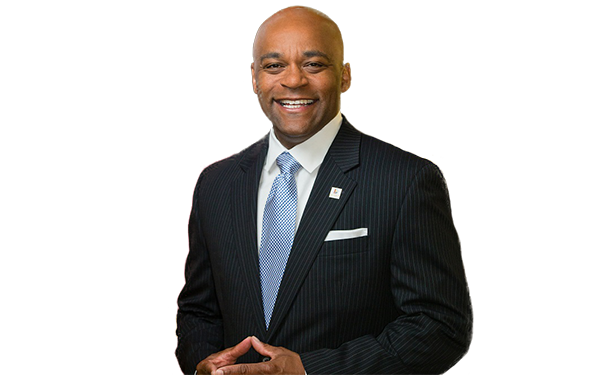 See previous 74 interviews: Secretary of Education Arne Duncan, Senator and presidential candidate Marco Rubio, Newark superintendent Cami Anderson, former L.A. mayor Antonio Villaraigosa and Colorado state senator Mike Johnston.
Denver Mayor Michael Hancock was elected in 2011 and overwhelmingly re-elected in 2015. Although the Democratic leader has no formal control over the city’s school system — which is governed by an elected school board — he has emphasized education issues, generally supporting the growth of charter schools and teacher quality initiatives, including performance pay. Denver students have made above average growth on standardized tests, relative to the rest of Colorado students, according to state data.
In a recent phone interview with The 74, he discusses how Denver is trying to strengthen its schools, recruit more teachers of color, and maintain a strong relationship not often seen in other cities between charters and district schools. Hancock, 46, also talks about the presidential election and what Hillary Clinton told him about her vision for public education.
This interview has been lightly edited for clarity and length.
The 74: Why do you think a strong public school system is so important for a city like Denver?
Hancock: Well we know that a lot of the folks who are moving to the city are younger in terms of just starting their careers, many of them don’t have families yet. Ultimately, as they move to our city, we want them to stay. And by staying it helps us to drive our investments, as well as the growth in our city. But you gotta have good schools to do that, and obviously it helps us attract the jobs necessary to retain them if you have good schools.
Do you find that more Denver residents are enrolling their kids in Denver Public Schools?
Denver Public Schools has become, in the last five years, the fastest-growing urban school district in the country. And a lot of that has to do with people who are coming back to the school system, folks who are moving into the city. At the same time, we’ve seen a decrease in the number of kids who are enrolled in private school. So we’re seeing more and more kids enrolled in public schools. There are a variety of factors driving that, but you’re talking about the fastest-growing urban school district in the nation.
So how is Denver trying to make the schools stronger? How are you trying to improve your schools?
First and foremost, we’ve elected a Board of Education that is accountable and committed to making sure that every young person in the city of Denver has access to quality schools, starting in their own neighborhoods. That’s been critical because we’ve attracted some award-winning programs to communities, many that have been underserved. Some today that were quite frankly mired in perennially failing schools five, six years ago now have some of the leading schools in the state and that has made a difference.
Secondly, as we grow, being able to recruit the best administrators and teachers to the school district makes an awful lot of difference. We certainly have seen that with the partnerships through Teach For America, and other innovative programs that are helping us to drive new energy and innovation to the classroom.
We’ve also had quite a few state and local laws that have passed that have aided innovation and injection of creativity into the classroom. Those things have made a difference in Denver.
I read in your biography that you yourself are a graduate of the Denver Public Schools. Do you think the schools have improved a lot since you were in the system?
Yeah, I think so. I think every school district across this country has had to find new innovative ways of educating young people, particularly now that we’re measuring where young people are and where they’re not. So it’s made a difference to be able to quite frankly look at the schools of the past and build off of that but also prepare young people for the future. And that’s what our schools are designed to do today.

“You can’t improve what you can’t measure. We’ve got to be able to know where our young people are and to be able to use those indicators as benchmarks to improve”