The 74 Fact-Check: All the Ways Donald Trump and Ted Cruz Flubbed on Education at Thursday’s Debate 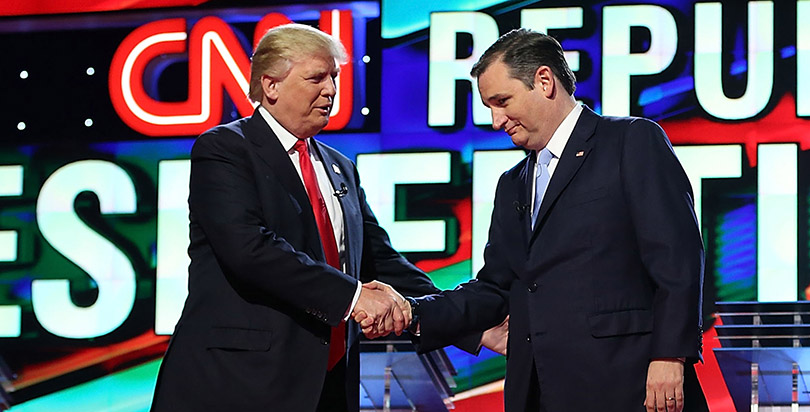 The Fact-Check is The Seventy Four’s ongoing series that examines the ways in which journalists, politicians and leaders misuse or misrepresent schools, education data and research. See our complete Fact-Check archive.
As the 2016 presidential primaries seem like they’re maybe, hopefully, beginning to wind to a close, the American people still haven’t heard much from the remaining contenders on the issue of K-12 education.
We’ve learned that Hillary Clinton thinks unions need to “eliminate” the criticism that they protect bad teachers. Florida Sen. Marco Rubio wants American kids to be welders instead of philosophers. And last night, GOP frontrunner Donald Trump, who’s been largely mum on grade schools beyond his hatred of Common Core, said he’d have one-time rival Ben Carson “very involved with education, something that’s an expertise of his.” (Read Carson’s exclusive interview with The 74 on K-12 education issues.)
Through it all, facts have often been in short supply, replaced instead by sweeping rhetoric about our kids falling behind those of other countries, or how the feds have imposed their will on our neighborhood schools.
But in Thursday night’s Republican debate, both GOP frontrunner Donald Trump and his closest rival, Sen. Ted Cruz, uttered a series of eye-popping proclamations so removed from reality they demand a stiff antidote of truth to bring them back to Earth:
TRUMP: “It [the Common Core] has been taken over by the federal government. It was originally supposed to be that way [developed by states and voluntarily implemented by states and districts]. And certainly sounds better that way. But it has all been taken over now by the bureaucrats in Washington.”
FACT: It was the states — more specifically the Council of Chief State School Officers and National Governors Association — that developed the standards. During the Obama administration, the Education Department has played no specific role in the implementation of those standards, and the classroom curriculum used to meet the broad goals set out in Common Core is created by districts and states, as it always has been. Further, states have made tweaks to the Common Core standards since their initial adoption and, in some cases, have decided to drop the standards entirely. (Check out our Common Core flash cards.)
CRUZ: “The Obama administration has abused executive power in forcing Common Core on the states. It has used Race to the Top funds to effectively blackmail and force the states to adopt Common Core.”
FACT: States competing for Race to the Top funds in 2009 got more points on their application for the adoption of “internationally benchmarked standards and assessments that prepare students for success in college and the workplace.” Adopting those standards won a state 40 points out of 500 possible, according to the National Conference of State Legislatures.
Congress has not funded Race to the Top grants in the annual appropriations process for several years, and several states – notably Oklahoma and Indiana – have dropped the Common Core.
Former Louisiana Gov. and GOP presidential candidate Bobby Jindal sued former Secretary Arne Duncan and the department, alleging that they offered an illegal “quid pro quo” to states to adopt the standards in exchange for Race to the Top money. A federal judge ruled against Jindal in September.
CRUZ: “The one silver lining of Obama abusing executive power is that everything done with executive power can be undone with executive power, and I intend to do that.”
FACT: Federal law already prohibits the government from forcing states to adopt Common Core.
The Every Student Succeeds Act, which Obama signed into law in December, includes 13 references to the Common Core – all limitations on federal power to meddle in curriculum.
Specifically from the law: “No officer or employee of the federal government shall, through grants, contracts, or other cooperative agreements, mandate, direct, or control a state, local education agency, or school’s specific instructional content, academic standards and assessments, curricula, or other program of instruction…including any requirement, direction, or mandate to adopt the Common Core State Standards.”
To the contrary, ESSA specifically protects states’ rights to “enter into a voluntary partnership with another state to develop and implement” challenging academic standards.
CRUZ: “I intend to work to abolish the federal Department of Education and send education back to the states and back to the local governments.”
FACT: The federal government already has a limited role in K-12 education. Particularly in the wake of the passage of the Every Student Succeeds Act, the primary federal roles are providing supplemental funds for the education of children in poverty (the Title I program), setting standards for the education of children with disabilities and helping fund those services (the Individuals with Disabilities Education Act), and ensuring children don’t go hungry (the school lunch program, which is run through the Agriculture Department.)
The monetary role is small, too. According to federal data, between 1980 and 2011, between 7 and 13 percent of total annual education funding came from federal sources. And only about half of that funding in 2011 came from the Education Department. Another quarter of that funding came from the Department of Agriculture for the school lunch program. The Defense Department (junior reserve officers’ training program and their own school system for students of military members), Health and Human Services (Head Start pre-school) and about a half-dozen other departments for smaller programs made up the rest.
CRUZ: “The most important reform we can do in education after getting the federal government out of it, is expand school choice; expand charter schools and home schools and private schools and vouchers, and scholarships.”
FACT: Abolishing the federal Education Department would also wipe out the Office of Innovation and Improvement, which oversees the very initiatives Cruz wants to promote: federal efforts to spur more charter schools and magnet schools; the DC Opportunity Scholarship Program, the only federal school voucher program; and the Office of Non-Public Education.
Submit a Letter to the Editor
March 11, 2016