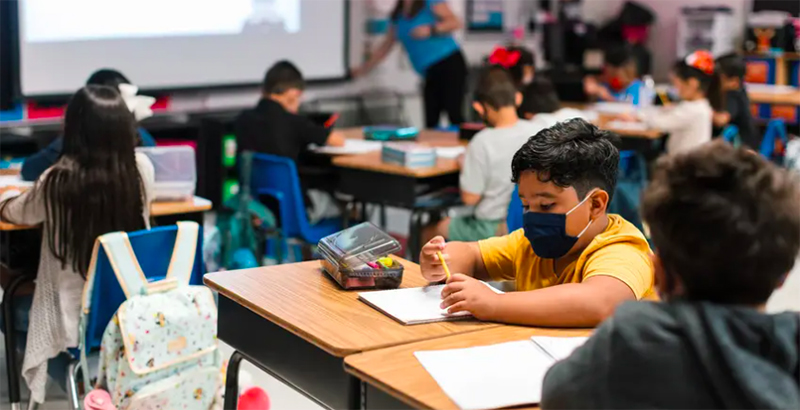 Students work at their desks at Blanco Vista Elementary School in San Marcos. (Jordan Vonderhaar for The Texas Tribune)

Students in Texas public schools are facing another year upturned by COVID-19 as the highly contagious delta variant spreads, mask mandates are inconsistent and children under 12 cannot yet be vaccinated against the virus.

Two months into this school year, the number of reported coronavirus cases among students has surpassed the total from the entire 2020-21 school year. Schools are prohibited from taking precautions such as requiring masks, though some are fighting the governor’s order banning mask mandates. Far more students are on campus, since most districts do not have a remote learning option.

Every Friday, the Texas Education Agency releases COVID-19 case counts for students and staff, as reported by the state’s school districts. Here is the latest situation for the week ending Sunday, Sept. 26: 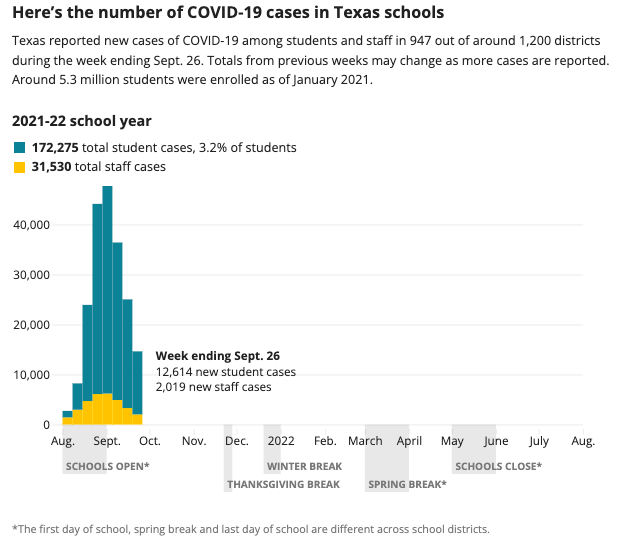 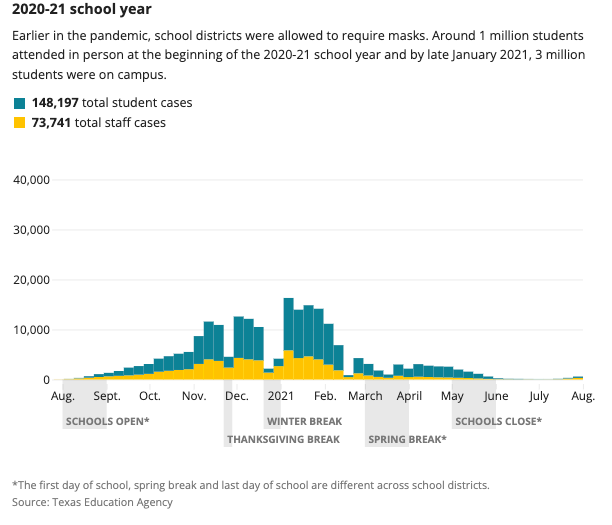 State data on school cases is incomplete and likely an undercount. TEA suppresses some districts’ case counts to protect student privacy, and not all districts report student and staff cases to the state, despite agency guidance requiring otherwise. The agency also retroactively updates its data from previous weeks as more districts report cases.

Some large districts, such as Houston and Dallas, have not consistently reported cases to the state since TEA started tracking COVID-19 data on Aug. 2 for this school year. Many districts publish a COVID-19 dashboard that shows cases, and TEA recommends families check for the latest data there.

Entire districts, including Angleton and Lumberton, have closed temporarily without reporting cases to the state. These districts don’t necessarily report their closures, either, since they are not required to do so. TEA informally tracks closures based on media and district reports, said Frank Ward, an agency spokesperson.

Here are the 10 districts reporting the most cases for the week ending Sept. 26: 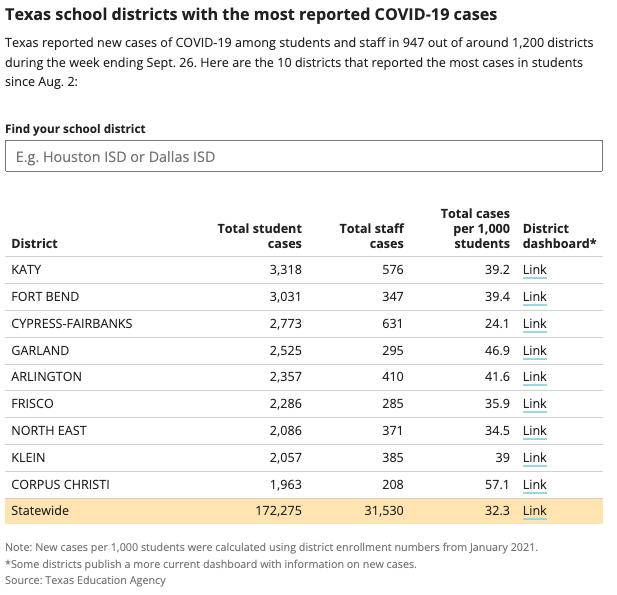 Going into the school year, districts had fewer options to slow the spread of the virus and keep students and staff safe.

Last year, school districts were permitted to require masks. This year, Gov. Greg Abbott has tried to prohibit mask mandates in schools. After remaining silent on the issue for weeks, TEA quietly updated its guidance last week to say school districts can’t require masks, which has drawn a federal investigation for possibly violating the rights of students with disabilities. Still, some districts have continued to contest or ignore the ban.

Before the school year began, the state did not fund online options. Instead, school districts either used federal relief dollars or dug deep into their budgets to provide remote programming for families.

But now, some families and districts may find relief, as Abbott recently signed into law Senate Bill 15, which expands and funds virtual learning. While advocates for the law say it is a step in the right direction, it excludes students who failed the STAAR test.

In the last school year, almost 40% of students did not pass their math assessment, and nearly a third didn’t pass reading. Those who failed were disproportionately Black and Hispanic.

This article originally appeared at The Texas Tribune.