Texas Governor Says No Public Schools Will Be Allowed to Require Masks; Vast Majority of State’s Children are Unvaccinated 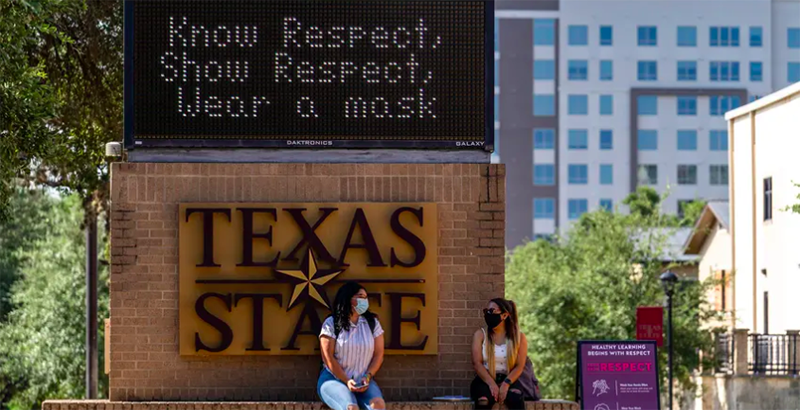 Gov. Greg Abbott announced Tuesday that public schools can no longer require masks on their campuses starting June 5. The decision was part of a new executive order that bans government entities in Texas — like cities and counties — from mandating masks in the fight against the coronavirus pandemic.

Starting Friday, any government entity that tries to impose a mask mandate can face a fine of up to $1,000, according to the order. The order exempts state supported living centers, government-owned or -operated hospitals, Texas Department of Criminal Justice facilities, Texas Juvenile Justice Department facilities, and county and municipal jails.

The order is arguably the most consequential for public schools. After Abbott ended the statewide mask requirement in early March, school systems were allowed to continue with their own mask-wearing policies unchanged. But after June 4, “no student, teacher, parent, or other staff member or visitor may be required to wear a face covering,” according to Abbott’s new order.

While 30% of Texans have been fully vaccinated against COVID-19, the vast majority of children are unvaccinated. The Pfizer vaccine was authorized last week for children as young as 12. The Moderna and Johnson & Johnson vaccines are still only authorized for those 18 and older. School-age children have seen lower infection rates than other age groups. COVID-19 cases among those 5-17 years old make up 10% of total cases in the country, according to the latest data from the Centers for Disease Control and Prevention.

Last week, the CDC said fully vaccinated people no longer have to wear masks outdoors in crowds and in most indoor places.

Despite dire warnings about the potential impact of removing the statewide mask mandate, key pandemic metrics in Texas have not spiked since then and have gone down in most cases. On Sunday, the state health department had its first day in over a year without reporting a COVID-19 death.

“The Lone Star State continues to defeat COVID-19 through the use of widely-available vaccines, antibody therapeutic drugs, and safe practices utilized by Texans in our communities,” Abbott said in a statement on his latest order. “We can continue to mitigate COVID-19 while defending Texans’ liberty to choose whether or not they mask up.”

The Texas State Teachers Association called Abbott’s latest move premature. In a statement, the head of the association, Ovidia Molina, said Abbott should have waited until the CDC issued updated guidance on masks for the 2021-22 school year. Molina acknowledged that some Texas school districts have already ended their mask requirements but said the association believes “that also is ill-advised.”

“The health and safety of our students, educators and communities must remain our first priority as we attempt to emerge from this pandemic,” Molina said.

Abbott’s new rules will take effect as the school year is winding down for most students — or already over. The last day of classes for the state’s biggest school district, Houston ISD, is June 11. May 27 is the last day for some students in the state’s second-biggest district, Dallas ISD.

The Texas American Federation of Teachers was also critical of Abbott’s decision, calling it “unconscionable” given that a vaccine is not yet available for kids under 12 years old. Even if the normal school year is coming to a close, both TSTA and Texas AFT noted Abbott’s order will impact students who attend in-person summer school.

Austin ISD Superintendent Stephanie Elizalde said the district will continue to ask everyone on its campuses to wear masks through June 4. After that, she noted, “there is nothing in the Governor’s order that forbids people from wearing masks. It only means we cannot require them.”

Abbott’s order also applies to public colleges and universities. After the announcement, Texas A&M University told students that the end of its mask requirement was “effective immediately and therefore applies to remaining commencement ceremonies, as well as indoor and outdoor facilities and venues.”

Leaders of some of Texas’ largest cities — all Democrats — were critical of Abbott’s latest order but seemed to accept it and showed no signs they planned to fight back. Houston Mayor Sylvester Turner called Abbott’s move a “clear overreach” and encouraged city employees and visitors to city facilities to wear masks if they are not fully vaccinated, but he added that “we are not mandating it.” Austin Mayor Steve Adler and Travis County Judge Andy Brown said they will “continue to be careful” and will spend the next few days “speaking with parts of our community most impacted by the Governor’s order, including schools and nursing homes.” And Dallas County Judge Clay Jenkins also voiced criticism of Abbott’s order, noting it “deviates” from CDC guidance saying unvaccinated people should continue to wear masks indoors.

The governor’s most recent order comes roughly two and a half months after Abbott lifted the statewide mask mandate. In that order, he said “no person may be required by any jurisdiction” to wear a mask. Now, he is saying a specific type of jurisdiction — government entities — can face a penalty for mandating masks.

After Abbott initially lifted the statewide mask policy, some local governments said they would continue to require masks. Texas Attorney General Ken Paxton sued Austin and Travis County over their plan to continue mandating masks, and in late March, a district judge denied Paxton’s request for a temporary halt of the local mask requirement.

Abbott’s latest order leaves untouched the ability of private businesses to require their customers or workers to wear masks.

Despite ending the statewide mask requirement, Abbott has continued to take hits from some fellow Republicans over his pandemic response. One of them, former state Sen. Don Huffines of Dallas, launched a primary challenge to Abbott last week and said after Abbott’s announcement Tuesday that Texas “never should have never allowed mask mandates in the first place.”

Patrick Svitek is a political correspondent at the Texas Tribune, the only member-supported, digital-first, nonpartisan media organization that informs Texans about public policy, politics, government and statewide issues.

Disclosure: Texas A&M University; Steve Adler, a former Texas Tribune board chair; Texas AFT; and the Texas State Teachers Association have been financial supporters of The Texas Tribune, a nonprofit, nonpartisan news organization that is funded in part by donations from members, foundations and corporate sponsors. Financial supporters play no role in the Tribune’s journalism. Find a complete list of them here.

Patrick Svitek is a political correspondent at the Texas Tribune.