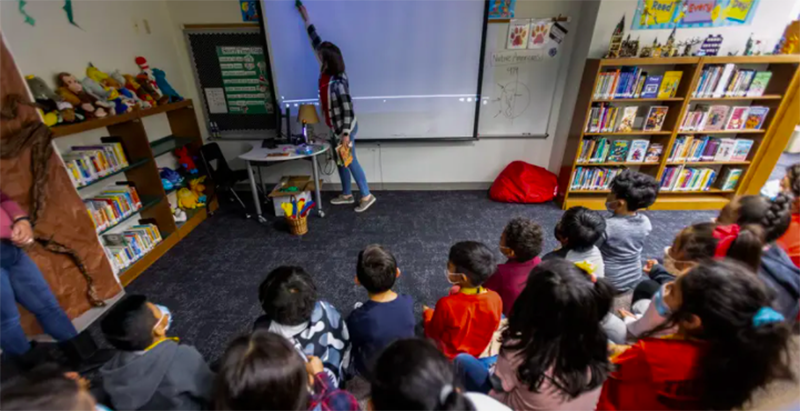 Students sit for a lesson from the librarian at Blanco Vista Elementary in San Marcos. (Jordan Vonderhaar / The Texas Tribune)

In the agency’s model policy, there is an emphasis that parents should have a role in how books are selected. The agency says that districts should make new selections readily available for parents to review. School librarians or staff should be “encouraged” to ask parents what their children can and cannot read.

The new guidelines suggest that school boards have final approval of all new books and that a committee should be put in place to review books if parents file a formal “request for reconsideration.”

To avoid “obscene” content in libraries, the agency reminded school districts that state law spells out that handing out inappropriate materials to minors is a crime. Texas librarians, school administrators and public education advocates have denied allegations that there are “inappropriate” or “pornographic” materials in school libraries or that they’re handing out such content.

The standards are to be used as guidance for school district officials as they develop new procedures or alter their policies for selecting or removing library books. School districts, which are largely independent governmental entities and run by locally elected trustees, are not required to adopt the agency’s recommendations.

The TEA’s new standards come about five months after Gov. Greg Abbott directed that agency, the Texas State Library and Archives Commission and State Board of Education to develop such guidelines. In his directive, Abbott cited two memoirs about LGBTQ characters, which include graphic images and descriptions of sex, that were found in some Texas school libraries.

“There have been several instances recently of inappropriate materials being found in school libraries,” TEA commissioner Mike Morath said Monday in a letter to Abbott. “This model local school board policy will serve as a helpful guide to school boards as they create the policies for their school district libraries.”

In his letter Monday, Morath said that his agency worked with the state’s library and archives commission and the SBOE chair to develop the guidelines.

As most school districts have existing policies for how books are selected or removed, it was not immediately clear Monday how this guidance will affect individual school libraries.

Shannon Holmes, executive director of the Association of Texas Professional Educators, warned school district officials to be wary of what policies they decide to adopt. Holmes said they should listen to their communities and not to be taken away by the politics surrounding the situation.

“As we have said since these latest book controversies began, elected school boards have for decades had the means to work with educators and parents to determine what library content meets the needs of their local communities,” Holmes said.

Barry Perez, spokesperson for the San Antonio area’s Northside Independent School District, the state’s fourth-largest district, said officials there don’t yet know if the guidance will affect them. But he said the district already has long-standing protocols to deal with concerns about books or any instructional materials.

“We will continue to follow these protocols and address any specific concerns on a case by case basis and with thoughtful consideration of students’ interests, age, maturity, and reading skills level,” Perez said in a statement.

The TEA was directed to create such standards after parents around the state caught Abbott’s attention as they called for certain books with depictions of sex to be removed from school libraries. As Abbott seeks a third term in office, he has made parental rights in education a priority issue — promising a “parental bill of rights” amendment to the Texas Constitution even though parents already have a myriad of rights when it comes to their children’s education.

Those include “Gender Queer: A Memoir,” by Maia Kobabe, which depicts the author’s journey of discovering their gender identity and sexual orientation. It includes a few pages of explicit illustrations depicting oral sex.

While these books were being challenged and debated in school board meetings during the fall, state Rep. Matt Krause, R-Fort Worth, sent a list to school districts in October of some 850 books — including Kobabe’s — asking for information about how many are available on their campuses.

Krause’s list includes several books that discuss race, sexuality and puberty. Most were written by women, people of color and LGBTQ authors.

Brian Lopez is an education reporter at The Texas Tribune, the only member-supported, digital-first, nonpartisan media organization that informs Texans about public policy, politics, government and statewide issues. This article originally appeared on April 11 at TexasTribune.org.