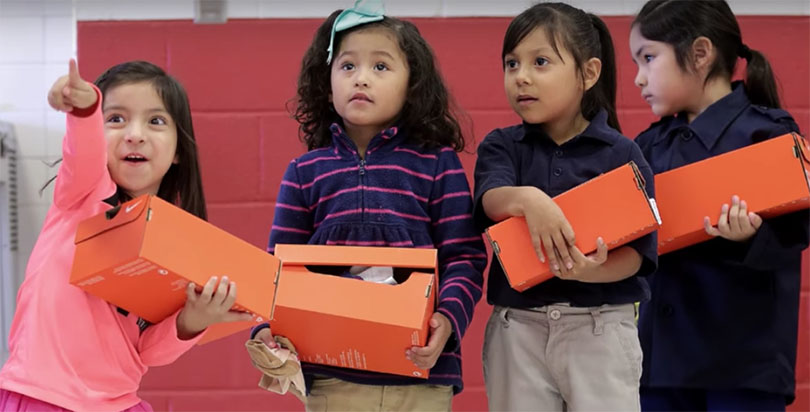 Most kids preparing for their bar or bat mitzvah take on a community-service project as part of their new role as Jewish adults. But Drew Frank of El Paso, Texas, didn’t just conceive and carry out his project; he got all his guests involved, too.

Instead of savings bonds, religious objects or pen-and-pencil sets, Drew asked his guests to give cash. And with the $25,000 they donated, he bought 800 pairs of new sneakers for kids in need.

“I have always loved sneakers,” he said. “When I saw there was a need for sneakers, I wanted to give back.”

Drew, an eighth-grader at St. Clement’s Parish School, teamed up with the Braden Aboud Memorial Foundation, which has a long history of arranging shoe donations as well as promoting sustainable physical-fitness programs and playing fields in El Paso–area schools. The organization identified Beall Elementary School in south central El Paso as an ideal recipient for his gift.

On November 7, the school held a pep rally where 400 pairs of Nike shoes were distributed to the children. Volunteers helped measure students’ feet to fit the new sneakers, which were sourced from a local Nike distributor that sells them to the foundation at cost, according to El Paso Inc.

The excitement was palpable — some of the children had never had a new pair of shoes before.

Edgar Vallecillo was the first student to receive the new kicks. “It feels good to have new shoes,” the first-grader said. “I like how they feel.”

Amy Marcus, who has coordinated the foundation’s B-Strong Shoe Giveaway for eight years, told El Paso Inc. that some kids in El Paso wear old shoes patched together with tape or oversize footwear stuffed with newspaper to help them stay on.

“As far as a hands-on, feel-good project, there’s nothing like this,” she told the magazine. “The poverty that we have in parts of El Paso is hard to believe. The kids are so excited and so grateful.”

Congrats to Drew Frank, Braden Aboud Foundation and all the kids at Beall Elementary! New shoes for all the great boys and girls!#justdrewit pic.twitter.com/4cienG6Agk

Drew will donate the other 400 pairs of sneakers to a YWCA transitional living center and a local orphanage, according to USA Today. In the meantime, the Beall students are enjoying the feeling of wearing new sneakers that fit perfectly.

“They are pretty,” kindergartner Monet Solis said as she slipped on her new pink and black Nikes. “They are nice people for giving us shoes. That was very helpful.”