Teaching Empathy in Kindergarten — Or, Do We Have to Let the Girls Play, Too? 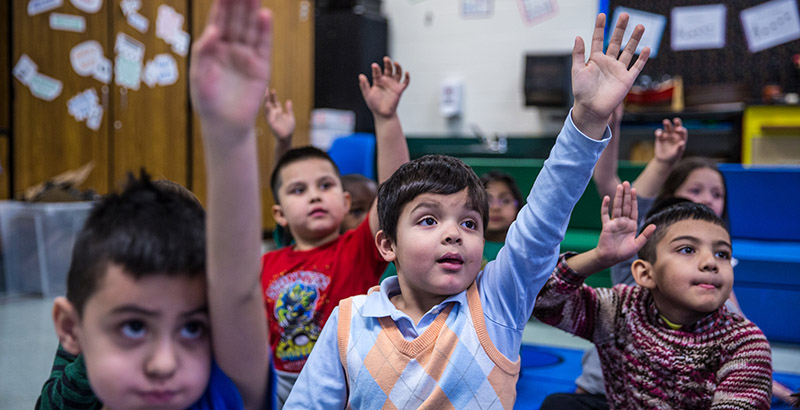 When people think about what I teach as a kindergarten teacher, they likely think about subjects like reading or math. Teaching 5- and 6-year-olds to understand their feelings and the feelings of others probably doesn’t immediately come to mind.

The truth is, empathy is a core part of what I teach my students. I may not actually use the word “empathy” in my class, but I encourage my students every day to think about their actions and how those actions impact other people. I’m not alone in this; my fellow teachers and our principal have dedicated themselves to creating a positive school culture for our students.

If you talk to our students, you may hear about our focus room. Students who are misbehaving — often because they are feeling overwhelmed — spend time in this room with an adult who can help them make sense of their emotions. Often, these conversations are about how to communicate how they’re feeling without hurting others. The goal is to make sure students know they are in a safe community, that teachers and staff have their back. Teachers let students know that the school is not going to allow anyone to mistreat them, just as the school wouldn’t allow them to mistreat others.

One tool we’ve used at Beacon Elementary School to introduce empathy in a way that resonates with students is an animated video series developed by Harvard University and ClassDojo, a communications app we use at our school. Recently, our “Special Person” of the day was passing out snacks. They included animal cookies, one of his favorites, so he asked if he could take the extras home, since he was “special and all.” I asked him if he thought that was fair to everyone else, but he couldn’t get past the fact that they were his favorite and he was “special.” I told him I wondered how he would feel if I let his friend take all the extras home and not let him have any. He said he would be mad. I saw the lightbulb go off as he realized the others might feel the same way.

In another example, one of my students recently brought a football from home, to play with at recess. He asked if it would be OK. I told him I thought it would be fine as long as everyone was having fun. I didn’t want anyone feeling left out. “Girls, too?” he asked. I asked what he thought, and he reasoned that if they wanted to play, they’d probably all have fun together. And, though not everyone joined in, the boys and girls who did play with the football had a great time together. Before our focus on empathy, I’m not sure our students would have thought so carefully about the feelings of others.

In my 33 years of teaching at Beacon Elementary, I am proud of the school culture we’ve created. Whatever is happening outside in the world, in our school, and in my classroom, a major priority is to help the youngest students begin to think about being an important part of something bigger than themselves. That their friends, and everyone they meet, have feelings as strong and important as their own. It is to show them that they can decide how to react in any situation, and that how they act and react has a direct impact on them and those around them.