A special education teacher who taught a 14-year-old with Down Syndrome to read. Remotely and during the pandemic.

An art teacher who helped a student come to terms with her father’s death.

A second grade teacher who moved out of her home so she could educate kids in person.

This year, those gestures have taken on extra meaning — and many teachers have risen to the challenges posed by the pandemic, putting in extra time and energy for their students.

To mark Teacher Appreciation Week, The 74 talked to parents and students around the country about the educators who have made a difference for them over the past year.

This Teacher Taught a 14-Year-Old With Down Syndrome to Read. Remotely. During a Pandemic. 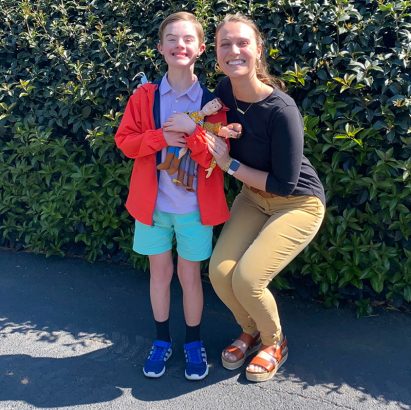 Hannah Land visited Landon at home to help him get set up for standardized testing. (Krystal Gurganus)

As the mother of a teen with Down Syndrome, Krystal Gurganus has seen her son Landon face his share of challenges. So it came as a shock when special education teacher Hannah Land taught Landon to read this year – remotely. In the middle of a pandemic.

“I’ve never heard my child read before. And he’s 14 years old,” said Gurganus. “So this was in that moment when I was sitting beside him on a computer, and I hear him read an actual story for the very first time, that was not only emotional, but it was mind-blowing that this teacher was able to engage my child through a screen and to get him to do that when we’ve never been able to do that.”

Land was also able to teach Landon to add and subtract this year, surpassing his goal of simply being able to identify numbers.

That was “one of those moments of ‘Holy moly’ … he is adding and subtracting. Not only identifying his numbers, but she’s taught him how to do something I never thought he would be capable of,” Gurganus said.

“She’s just kind,” she added. “She’s able to break that [communication] barrier down and still get to know her kids.” 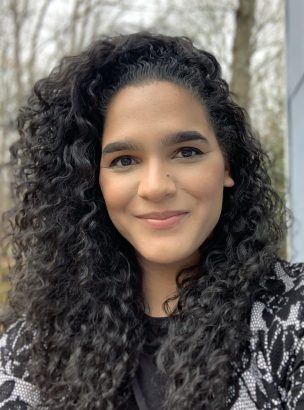 When her estranged father died suddenly in October, Eliza Grullon emailed her teacher June ArcaMay to say she’d be missing some Zoom classes.

That message kicked off an ongoing conversation and relationship that helped Grullon get through a tough school year.

ArcaMay “sent me an email explaining not only how to deal with it, but how to not blame myself because I was feeling a lot of guilt … when it wasn’t my fault,” Grullon said.

“I wasn’t emotionally stable, I couldn’t do anything really,” Grullon continued. “It was honestly, just a struggle to try to get up in the morning. And [ArcaMay] would check in with me, she would email me and say, ‘Do you need extra help? Do you need more time?’ And she actually ended up telling me a story about how she was with her dad … She never felt a close relationship with him at all … She made me feel like I wasn’t entirely alone.”

ArcaMay also checked in with Grullon’s mother to see if the family needed anything, offered to give them her printer so Grullon could keep up with her classwork, and made sure she didn’t fail the class.

“If it wasn’t for her, I wouldn’t have been as stable, honestly, as I am right now,” Grullon said. 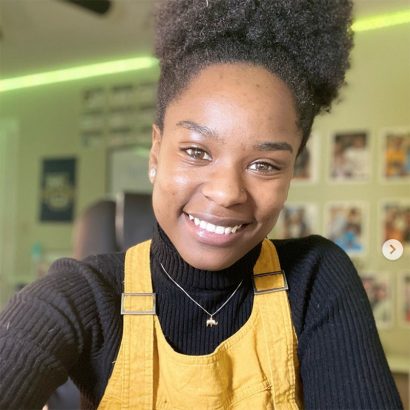 When Michalle Fain learned her student Julius and his siblings were having trouble keeping up with their online classes because they didn’t have enough devices, she used her own money to purchase two tablets for the family.

Fain has always been “that teacher that just goes above and beyond,” said Julius’s mother Shnia Davis. Fain got a green screen to enhance her Zoom lessons, and “the way that she taught was… almost like the kids were watching a show,” Davis said. When she wasn’t teaching or making educational TikTok videos, Fain checked in with the family often to make sure they were getting the school lunches and helped replace Julius’s computer when it broke.

“She really has a passion and a heart for these kids,” Davis said. 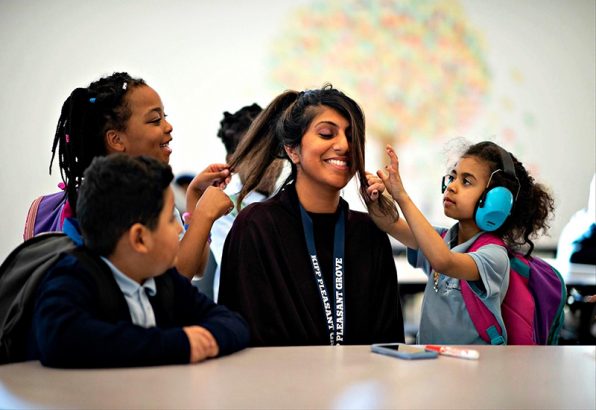 When her school resumed in-person classes last fall, second grade teacher Shameem Patel took a drastic step so she could be there for her students.

Patel moved out of the house she shares with her mother-in-law and husband into an apartment so she could see her students without putting the older woman at risk for COVID-19.

Since then she’s been living away from her family and teaching a class of 45 students — 11 in person and 34 at home.

Patel is like “one of those famous teachers that you see on Facebook and television” and think, this is the kind of teacher every kid should have, said Stephanie Reyna, whose daughter Arianna is in Patel’s class. 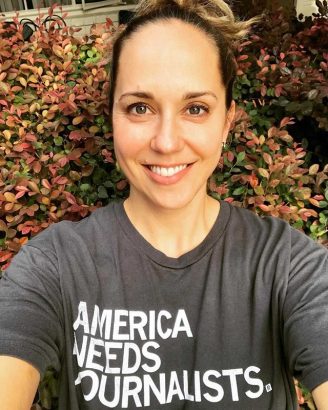 When student Oishee Misra had to meet with the parents of a student who died to write his obituary for the student magazine, she asked her journalism advisor Julia Satterthwaite for guidance.

Satterthwaite told her, “Don’t worry, you’re a great reporter, you’re going to do great. I know that you know how to approach this situation, with tact and with grace,” Misra recalled. The teacher also suggested some questions to ask and offered tips for the conversation.

“That validation was really reassuring to hear, just because I was so nervous,” Misra said.

“I feel really lucky to have had [Satterthwaite] for all four years of high school, and I really feel like I wouldn’t be the person that I am today without all the love and support and guidance that she’s given me,” Misra said. 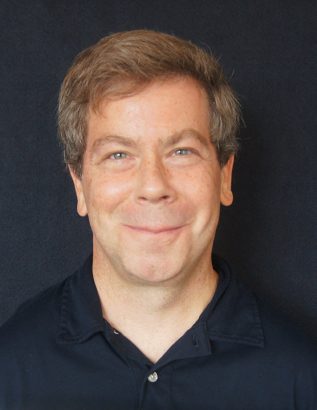 When the pandemic first hit New York City last spring, high school senior Syfur Rahman faced a difficult situation: one of his close friends lost a parent to COVID-19, and Rahman wasn’t sure how to show his friend he cared.

His school was closed for spring break, but Rahman emailed his teacher Richard Wieda and got a response right away. Wieda shared his phone number, so Rahman called.

“We talked about it — how to address the students’ problem and how to get back to him and how to show him that I care. And then he gave me advice. … [He said] give him your phone number and always have his back, try to support him [even though] … some people might not feel comfortable sharing out during tough times,” Rahman recalled. “I always go back to that instance, where [Wieda told me], try to take care of people you really care about and follow up with them.” 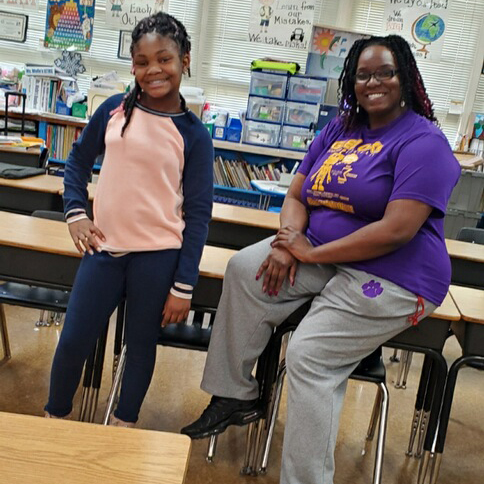 When Sheberia Wolfe saw that Brittney Chaney was struggling to adjust to virtual learning last spring, the teacher wasted no time in doing what she needed to do. “She actually came to pick my daughter up, took her and tutored her for a couple of hours, brought her back home,” said Brittney’s mom Sherrie.

Brittney, 9, has been getting straight As all year and also joined a dance program and a mentoring program Wolfe organized outside of school. 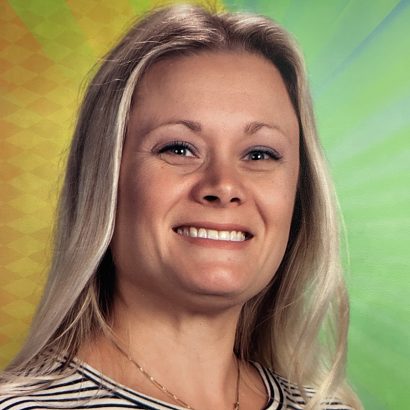 When Brennan Leugers’s doctor said he should learn remotely this year because of a health condition, his teacher figured out how to make him feel welcome in her class even though he was the only one learning remotely — and her district didn’t require her to accommodate him.

When the class had an ice cream party, Morris brought the treat to the Leugers’ home early so Brennan could participate in real time. When Brennan was student of the month, she brought him balloons and other treats, but also made sure there was a balloon tied to the desk where his computer sits in the classroom — so the whole class would know he was the month’s winner. When Morris takes a class picture, someone holds up Brennan’s computer so he’s in the photo, too.

“She has not only included him in just being on Zoom, but he is literally in the classroom,” said Brennan’s mom Amanda Leugers. “So he raises his hand, he gets called on, he participates in group projects. … He doesn’t even realize most of the time that he’s not physically in the classroom because he is so involved in everything.” 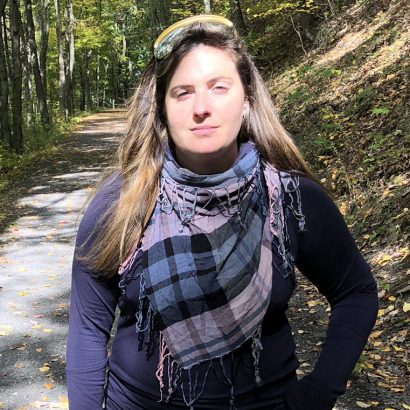 English teacher Ruthie Dreyer does all kinds of things to connect with her teenage students: She sends them compliments in the Zoom chat, shares stories from her own life and even makes videos of herself doing the class reading as if she were a YouTube influencer who happens to know a lot about If Beale Street Could Talk and The Great Gatsby.

“She opens every video and she’s like, ‘Hi, guys, welcome to another video,’” said sophomore Sylvie Slotkin. While she’s reading, “she’ll pause and she’ll sometimes relate it to something having to do with pop culture, or she’ll just explain a particularly difficult passage.”

“Sometimes you’ll even catch a glimpse of her getting up and getting her drink — it’s very personal … Even though I know she’s not reading directly to me, [I feel like] I’m like really being taken care of and she really cares about her students.”

This Teacher Makes Sure Her Second Graders Never Miss a Zoom 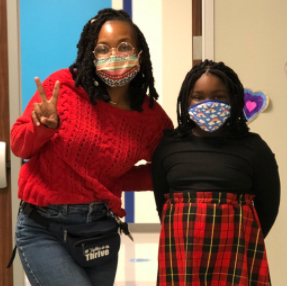 Cindy Gonzalez has been working at a clinic throughout the pandemic, which means her daughters have to manage their own remote school schedules.

Isabella, her second grader, was struggling to keep up until her teacher Porsha Hodge helped the family create a new routine. When it’s time for the live classes to start, Hodge calls or texts Gonzalez, who uses the cameras in her house to check whether Isabella is getting ready for class. Gonzalez can talk to her kids through the cameras, so she reminds Isabella to get logged into Zoom.

Hodge also takes time to call Gonzalez after the workday to let her know if her daughter has missed any assignments.

Gonzalez, who is a single mom, said Hodge saw her frustration and how much she wanted to help her daughter succeed in school, and “she put in a lot of effort to help me help Isabella.”

“I was so relieved,” Gonzalez said. “Because otherwise… I was about to give up.”