Survey Shows 3 in 4 Californians Support Charters as Alternatives for Low-Income Families; Majority Are Concerned About Federal Policy and Undocumented Students 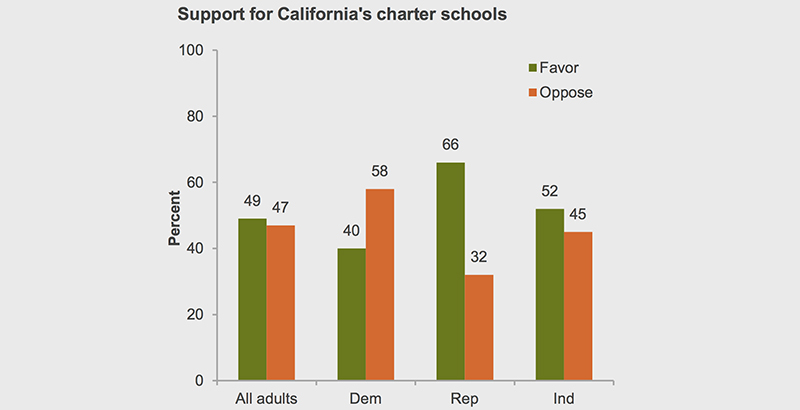 Californians are divided in their general views on charter schools, according to a statewide survey released last month. Most are in support of parents having the option to choose charters, but there’s also a high level of concern that charters divert state funding from traditional schools.

Nearly half — 49 percent — of all adults surveyed said they favor charter schools, while 46 percent oppose them. However, the margin of error was 3.5 percent, just over that spread.

An overwhelming majority — 75 percent — said it is very or somewhat important for low-income parents to have the option of sending their children to charter schools. Among public school parents, that figure rises to 81 percent.

However, 64 percent of adults were concerned about charters diverting state funding away from traditional local public schools. Those in Los Angeles were the most likely to express that concern, at 71 percent.

The statewide 2019 Californians & Education survey was released Wednesday by the Public Policy Institute of California and is the organization’s 15th annual K-12 survey. It polled 1,512 Californians in English and Spanish between April 5 and 15. It was PPIC’s first fully online survey, which the researchers said allowed them to examine more issues and go into greater depth than telephone polling.

“Charter public schools get mixed reviews,” Mark Baldassare, PPIC president and CEO, said in a news release. “Many Californians say it is important to have the option of a charter school, but there are concerns about the fiscal impacts on traditional public schools.”

Among public school parents, support for charters is somewhat higher, with 59 percent in favor and 38 percent opposed. About half of Latinos and whites are in favor of charter schools in general, over Asian Americans (43 percent). African Americans are the group least likely (36 percent) to favor them, the survey found.

When asked to name the biggest issue facing the state’s K-12 public schools, most adults and public school parents say they are concerned that the level of state funding for local public schools is not enough, followed by large class sizes, standards/quality of education, limited/poor curriculum and low teacher pay.

Following teacher strikes in multiple school districts including Los Angeles and most recently in Oakland seeking higher pay, 61 percent of adults and 58 percent of public school parents say teachers’ salaries in their community are too low. In Los Angeles, 65 percent hold this view.

But while most respondents wanted more funding for schools, when asked about a state ballot measure that would lower the threshold — from two-thirds to 55 percent — for passing local parcel taxes for public schools, less than half of Californians (44 percent of adults, 39 percent of likely voters) approve.

Those findings are especially significant in Los Angeles, where voters in June will be considering an L.A. Unified parcel tax that would raise about $500,000 annually. Only half of Los Angeles respondents said they would vote yes on a parcel tax.

Inside the L.A. ‘Parcel Tax’ Debate: Many Parents and Education Advocates Agree Schools Need More Money — They Just Don’t Trust LAUSD to Be a ‘Good Steward’ of the Funds

● Nine in 10 adults say it is very or somewhat important for charter schools to operate with the same transparency and accountability as traditional public schools.

● At least 7 in 10 adults — across all regions and across age, education, income and racial/ethnic groups — say K-12 should be a high or very high priority in the state.

● Four in 10 Californians (38 percent) and half of public school parents (49 percent) give their local public schools a positive grade of A or B.

● Many adults (43 percent) say they are very concerned that students in low-income areas are less likely than other students to be ready for college when they finish high school.

● Majorities (61 percent of adults and 71 percent of public school parents) are either very concerned or somewhat concerned that increased federal immigration enforcement efforts will affect undocumented students and their families in their local public schools.

● More than two-thirds of Californians (70 percent of adults and 80 percent of public school parents) are very concerned or somewhat concerned about the threat of a mass shooting in their local schools.

● More than half of Californians (55 percent of adults) would like Gov. Gavin Newsom to change to different K-12 policies, rather than continue those of his predecessor, Jerry Brown.

● Majorities of Californians approve of the Common Core State Standards and the Local Control Funding Formula.