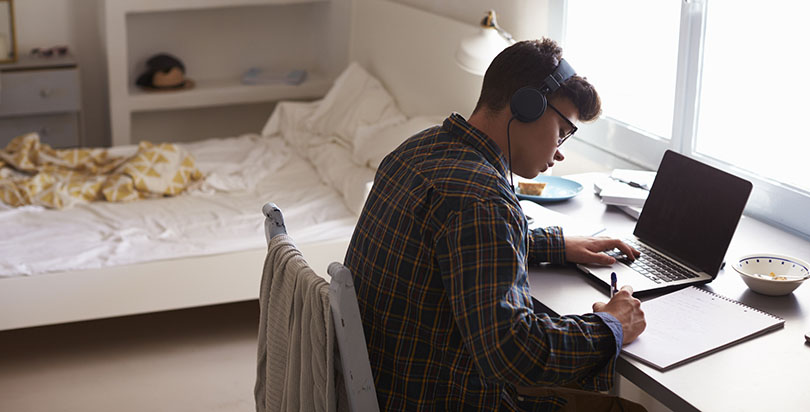 A new survey sheds light on the habits of some of America’s brightest high school math students, revealing that most dedicate one-quarter to one-half of their weekly homework time to math-related subjects and the majority spend this time alone in a quiet room.
Nearly half of the 1,680 students, or 47 percent, said they spend more than 11 hours a week doing homework, while 29 percent spend six to 10 hours, according to the survey conducted by the Philadelphia-based Society for Industrial and Applied Mathematics (SIAM) and sponsored by The Moody’s Foundation, the philanthropic arm of the credit-rating and analytics company.
The survey included juniors and seniors from high schools around the country who participated in the 12th annual Moody’s Mega Math Challenge, an applied mathematics competition that culminated April 24 as six teams presented their work in the final round of judging in New York City.
This year’s victors were Albert Cao, Andrew Hwang, Deepak Moparthi, Joshua Yoon, and Haoyang Yu, juniors from Adlai E. Stevenson High School in Lincolnshire, Illinois, who rose up through an initial pool of 5,100 participants. The team will split $20,000 in college scholarships. 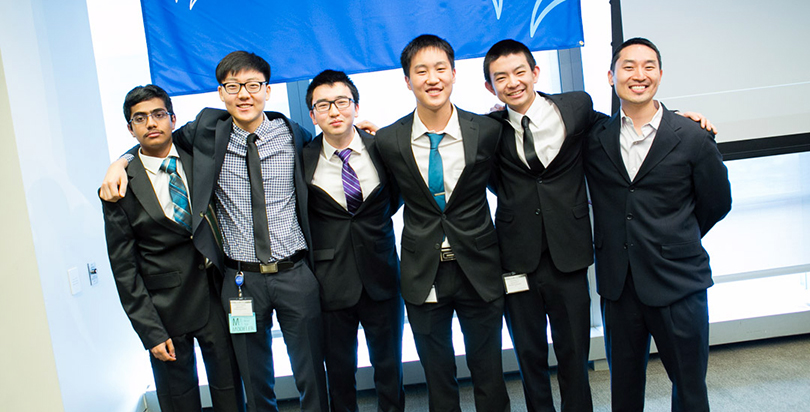 The 2017 first-place winners of the Moody’s Mega Math Challenge, from left: Deepak Moparthi, Andrew Hwang, Joshua Yoon, Albert Cao, and Haoyang Yu, with team coach Paul Kim, right, from Adlai E. Stevenson High School in Lincolnshire, Illinois. (Photo courtesy of The Moody’s Foundation)
This year’s challenge required students to use mathematical modeling to recommend solutions for the future growth and sustainability of the U.S. National Park Service.
The winning Stevenson high school team employed modeling to determine which parks may be at the greatest risk of flooding due to rising sea levels and used the results to recommend how the park service should prioritize funding at its 417 national sites.
“We pose big, messy problems about real issues that students may not know much about and that require them to make sense of it all by quantifying and organizing data, using skills they learned in math class — with the goal of solving something they never related to math before,” said Michelle Montgomery, the competition’s project director. ­­­­“If students participate in this contest, see its value, get excited about what is possible when they have math skills, and realize the type of cool work and impact they might be able to have in their communities and even the larger world, then we have succeeded in our mission.”
Five other finalist teams from Alpharetta, Georgia; Durham, North Carolina; Lincroft, New Jersey; Silver Spring, Maryland; and Westford, Massachusetts, will take home some of the total $150,000 in scholarship money that was up for grabs.

(Read The 74’s previous coverage of the competition: Spending the Day With Some of America’s Smartest Students at a $150,000 Math Challenge)

FLASHBACK: 2016 Moody’s Mega Math Challenge Winners
SIAM organizes the competition and The Moody’s Foundation sponsors it; this is the first time students were surveyed specifically about their study and lifestyle habits as part of the event. In addition to soliciting feedback as organizers try to improve the competition, the survey was also designed to provide a glimpse into students’ daily lives and motivations, said Mark Zandi, chief economist of Moody’s Analytics.
Other survey highlights:
More than 50 percent of students said they “just naturally enjoy math” and there was “no special reason” that contributed to their interest in the subject. A quarter of students attributed their affinity to a “good teacher.”
They appear to enjoy working independently but will seek out help if needed. When having trouble with a tough math concept, 29 percent said they keep trying until they figure it out on their own; 25 percent ask a teacher, 11 percent ask a friend, and just over 2 percent ask a parent.
When they’re not studying, students spend their time on a variety of extracurriculars: 78 percent participate in activities such as clubs and student government; 59 percent play sports or work out regularly; and 55 percent volunteer in their communities.
About 46 percent are involved with arts or music programs; 47 percent read books in their spare time and 30 percent have a part-time job. Forty-two percent of students said they play video games.
Nearly half, or 47 percent, reported that “most of the time” they eat balanced and healthy meals, including breakfast. Twenty-four percent said they prefer healthy foods but “frequently eat fast food/junk food.” A solid majority, 59 percent, said they get between six and eight hours of sleep most nights.
Looking at the habits and behaviors of high-achieving high schoolers can help economists and professionals in other science, technology, engineering, and mathematics (STEM) industries understand the role they can play in encouraging more students to pursue STEM, Zandi said. It can also help improve America’s academic proficiency in those areas.
U.S. students continue to lag behind their counterparts around the world in math and science — the most recent results from the Programme for International Student Assessment (PISA), from 2015, placed the U.S. 38th out of 71 countries in math and 24th in science, the Pew Research Center reported.
While disappointing, the poor scores aren’t a surprise, Zandi said, considering our culture’s emphasis on athletic achievements over excellence in math, science, or other subjects. He recalled attending an awards ceremony as part of his daughter’s high school graduation that was mostly devoted to lauding student athletes, while spending just a minute or two acknowledging the achievements of the top physics, biology, and math students.
“That’s kind of backwards, and so we need to really rethink where we’re putting our priorities,” he said. “We’re very good at graduating and incenting and rewarding our football stars, our soccer players, lacrosse players … but we’re not really good at doing it for our future mathematicians, scientists, engineers, technologists.”
Applied mathematics “is at the foundation of technology, science, engineering — things that make our economy tick,” Zandi said. Figuring out how to improve student performance in these areas is the “key to our economy’s long-term competitiveness — we need to have the best and the brightest … because it’s the best and the brightest that are going to make the products and services that people are going to want to buy in the future,” he said.
Submit a Letter to the Editor
May 14, 2017