Washington, D.C.
A united Supreme Court Wednesday set a new, more rigorous standard for special education services in the United States.
The unanimous decision in Endrew F. v. Douglas County School District will require school districts to offer individualized education programs “reasonably calculated to enable a child to make progress appropriate in light of the child’s circumstances.”
An attorney for the Colorado family who sued on behalf of their autistic son called it “a game-changer.” The ruling has the potential to alter educational services provided to millions of children around the country, and the costs of those services to the many more millions of taxpayers who fund them.

Great ruling by a unanimous Supreme Court on the right to all children–including those with a disability–to a proper education! #Endrew pic.twitter.com/eb8toVu7wi

The standards for that education, though, were different, depending on where a student lived. Some federal courts required a more meaningful education, but the majority said the acceptable measure of educational benefit was “merely more than de minimis” — in other words, just a little bit.
(The 74: Why Advocates Hope the Supreme Court Will Save Special Education)
Together, the eight justices who have made up the court since Justice Antonin Scalia’s death last year resoundingly rejected that lower standard.
“When all is said and done, a student offered an educational program providing ‘merely more than de minimis’ progress from year to year can hardly be said to have been offered an education at all,” Chief Justice John Roberts wrote for the court.
Jack Robinson, the attorney representing Endrew’s family, said he was shocked the court reached a decision so quickly and without dissent. Although the court did not go so far as to adopt a “substantial equal opportunity” standard that the Endrews had sought — one that would match that provided to students without disabilities — their main goal was to have the court “thoroughly denounce this lowest of the low.”
“By a Supreme Court rejecting that ‘merely more than de minimis’ standard is sort of a game-changer,” Robinson said. “It’s going to shift a fair amount of leverage to parents, that they now have some sort of substantive rights under the IDEA, which in most of the circuits they really didn’t have before.”

“Notably, the Court did not hold that Douglas County School District failed to meet the new standard, or say that DCSD can’t proceed to prove that it met that standard in the Endrew F. matter,” Trachman said in a statement. “Indeed, in this case, the Douglas County School District offered an appropriate Individualized Education Plan and we look forward to proving to the lower courts that the IEP meets the new, higher standard.”

During oral arguments in January, the school district’s lawyer, Neal Katyal, maintained that a new standard wasn’t needed, primarily because the current one, derived from a 1982 Supreme Court case, had “some bite.” He said procedural processes and reviews laid out in IDEA were sufficient to further guarantee an appropriate education for students. 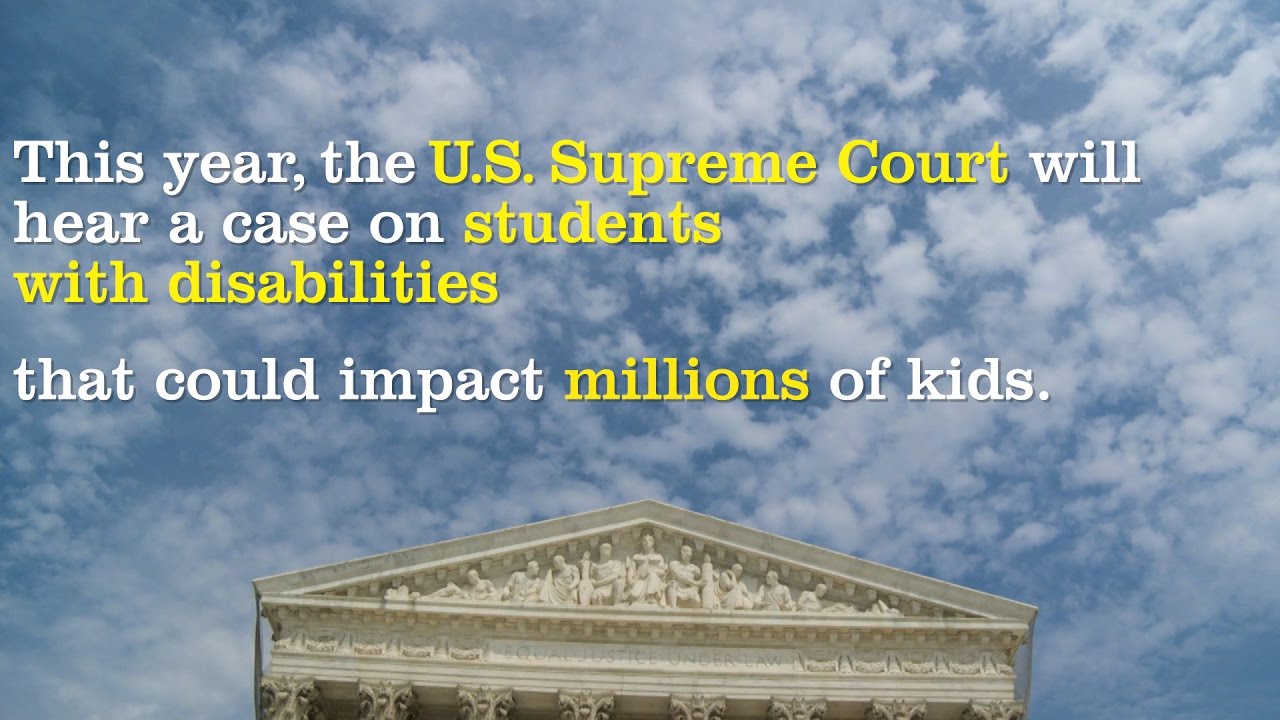 Setting a new standard would lead to a “huge morass” of lawsuits filled with controversial educational issues that generalist federal justices aren’t equipped to handle, he said. If the standard should be changed, Congress should do so, not the courts, he added.

Justices at oral arguments had seemed open to setting a new, higher standard, but they were puzzled over what it should be. Several also expressed concern about increased litigation and mounting costs to school districts, making the unanimous ruling somewhat surprising.
While not articulating a specific higher standard, justices emphasized that what “appropriate” progress means will look different from case to case, and lower-court judges shouldn’t take that lack of a “bright-line rule” as an invitation to substitute their ideas on educational policy for school authorities’.
For students fully integrated into mainstream classrooms, the standard means the IEP should be set to make sure the student passes classes and advances from grade to grade. For students like Endrew, who couldn’t be integrated into a regular classroom because his autism is severe, the IEP doesn’t have to show grade-level progress.
“But that child’s educational program must be appropriately ambitious in light of his circumstances, just as advancement from grade to grade is appropriately ambitious for most children in the regular classroom,” Roberts wrote.
Laura Schifter, a lecturer at the Harvard Graduate School of Education whose research focuses on increasing access for students with disabilities, said she was worried the Endrew case could cement the lower de minimis standard across the country. Ultimately, the court’s decision will ensure schools better serve students, she said, including those whose families don’t have the means to legally challenge schools on the level of services provided.
“When all is said and done, a student offered an educational program providing ‘merely more than de minimis’ progress from year to year can hardly be said to have been offered an education at all.” —Chief Justice John Roberts
Francisco M. Negrón Jr., the general counsel at the National School Boards Association, said he was happy to see the court reach a “measured decision” in the case. Negrón said he was comfortable with the court’s rejection of the lower de minimis standard since schools aren’t in the business of providing de minimis education to children, and that although schools will have to re-evaluate the services they provide, the court’s decision “should be within the operational sphere for schools to meet.”
Daniel Unumb, president of the Autism Legal Resource Center, called the court’s opinion a “fabulous victory for parents and kids across the country.” Though the court didn’t accept the standard he and other disability rights advocates had hoped for, he said schools that relied on the de minimis standard will be required to do more going forward.

“By rejecting that lowest-of-the-low standard, they did set a higher standard, and we should be clear, that low standard was definitely having an effect on many kids across the country as interpreted. If, in fact, all that a school has to do is meet a just above de minimis standard, then all of these other procedural requirements, substantive requirements, and protections are really for naught.”
Endrew had been enrolled in Colorado public schools for several years when his parents, feeling that he wasn’t making adequate progress, moved him to a private school and sued the Douglas County Schools for the tuition cost.
(The 74: Supreme Court Justices Eye Possible Higher Special Ed Standard, but What It Should Be Eludes Them)
The 10th Circuit Court, like many others around the country facing similar challenges, ruled for the school district, arguing that the little bit of progress Endrew made at the public school was enough to meet the burdens set out by IDEA.
The Supreme Court’s ruling dropped simultaneous to Supreme Court nominee Neil Gorsuch’s second day testifying before the Senate Judiciary Committee. As a federal judge on the U.S. Court of Appeals for the same 10th Circuit in Denver, Gorsuch has ruled on several special education cases — some of which made disability rights advocates uneasy.
In 2008, for example, Gorsuch found that a school district provided a free and appropriate education to a student with autism who had made little educational progress. IDEA, he wrote, only requires districts to provide educational benefits that “must merely be ‘more than de minimis’ ” — a contradiction to Wednesday’s Supreme Court ruling.

The last time the high court addressed the issue, in a 1982 case known as Rowley, the Supreme Court determined public schools must provide disabled students with “some educational benefit” but are not required to maximize a child’s potential. Justices also declined in that case to establish a single test to determine if the level of education being provided is sufficient under the law.

Though the Rowley case was used as precedent in the lower court’s decision in Endrew, the special education landscape has changed substantially in the past few decades, said Thomas Hehir, a professor of practice at the Harvard Graduate School of Education, who served as director of the U.S. Department of Education’s Office of Special Education Programs from 1993 to 1999 under President Bill Clinton. In 1997, for example, Congress amended IDEA to include a dispute resolution process between parents and districts. Lawmakers amended IDEA again in 2004.