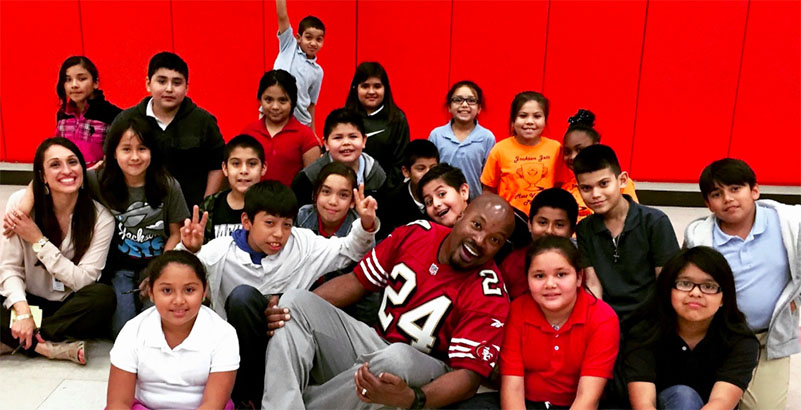 When students meet me and learn that I was in the NFL, their eyes light up and they shower me with questions: What’s it like being on TV? How much money did you make? What kind of car do you drive?

But being a former professional football player doesn’t define me. What I’m most proud of is how I’ve responded to setbacks throughout my life — and that’s what I want students to focus on as well.

Success is about how you deal with adversity. Have you done everything you can to succeed, even if things don’t go according to plan? Have you made the most of your opportunities? That’s the message I try to impart to students. 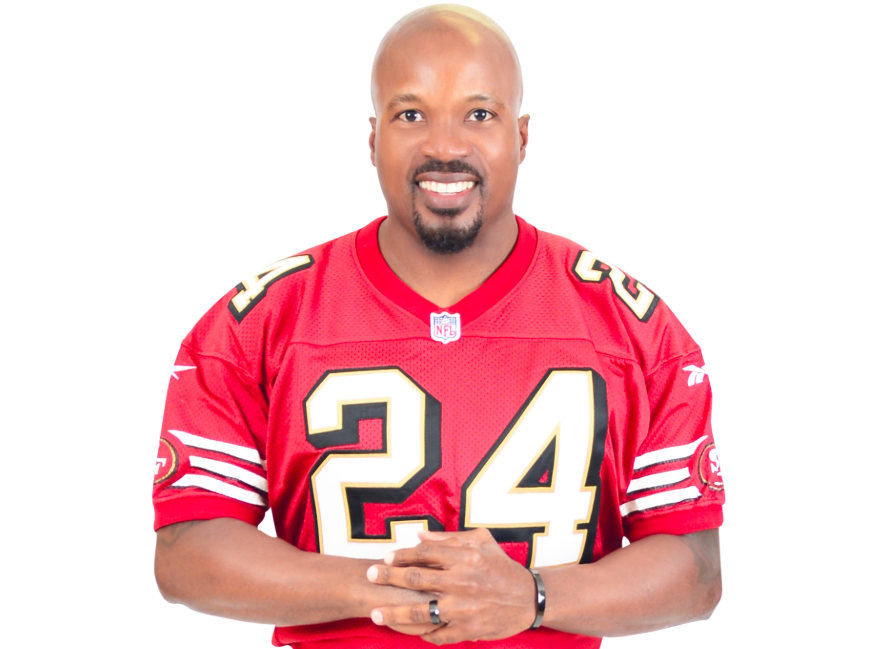 When I was young, I didn’t have an easy life. My dad didn’t finish high school, and my mom never even finished middle school. I grew up in a poor neighborhood of Houston as the youngest of three boys. My oldest brother ended up in prison.

We moved to the suburbs when I was in fourth grade. I was grateful to have a backyard to play in, but I missed my friends. On the first day of school, we were doing multiplication — but I didn’t know my times tables. The school I’d come from was behind in the curriculum. It was like a foreign language to me, and I was at a big disadvantage.

The other kids picked on me because I didn’t know the answers. The administration moved me to a lower-level class. I felt like I didn’t measure up, so I began acting out. I was sent to the principal’s office more than 50 times that year.

Then in fifth grade, things changed. My teacher, Ms. Williams, sat me down at the beginning of school and said, “I know you were in trouble a lot last year, but I believe you’re better than that. I’m going to help and support you, but I need you to do something for me in return: I need you to listen and be respectful in class.” She showed me she cared, and that’s all I needed to transform my behavior.

From that point, I was all in on becoming the best version of myself I could be. I didn’t go to the principal’s office once that year.

That’s also when I developed a fascination with football. I would play with friends after school, and I would stuff toilet paper in my front pockets to pretend I was wearing thigh pads like a real football player.

The summer before I entered sixth grade, I begged my mom to let me play Pop Warner. She told me I could, but I had to pay the $50 registration fee myself. So I created my own business. I swept sidewalks, cut lawns and did whatever odd jobs I could to raise the money.

My first real team was the Windsor Redskins. When the coach asked me what position I wanted to play, I said, “I don’t care, I just want to hit somebody.” He put me on the offensive and defensive lines. We went 1-9, with our only win coming by forfeit. But I didn’t mind; I was just happy to be playing a game that I loved.

I told my friends I wanted to play in the NFL someday. They said I wasn’t big enough. And also: “How are you going to go to college if your parents never even finished high school?” But I didn’t listen to their doubts. Nothing would keep me from pursuing my dream.

In seventh grade, I faced another setback. House Bill 72 in Texas stipulated that students who failed a class couldn’t play organized football. I failed math that year, because I wasn’t taking my education seriously enough. The feelings of inadequacy I’d had back in fourth grade returned.

When I told my dad, he said, “How do you feel right now?” “Not good,” I told him. “I want you to remember this feeling,” he advised me. “If you don’t want to feel this pain again, don’t ever sell yourself short.” I remember that moment very clearly. From then on, I never came close to failing again.

When I was in eighth grade, my parents divorced. That rocked my world. But I still took my academics seriously, and I continued working hard to develop my football skills.

In 10th grade, I was homeless. The mother of one of my friends offered to take me in. She was a single mom with two jobs and three kids, yet she took me in for 2½ years while I finished high school.

It wasn’t until my senior year that I made the varsity football team. However, I had a very good year — and I ended up with several Division I scholarship offers. I committed to Baylor University while on a recruiting visit, because the head coach guaranteed I would graduate from college with a degree.

At Baylor, I was a three-year starter (and captain) as a defensive back. I didn’t play as a freshman so I could play a full four years. In the end, I graduated in five years with a bachelor’s degree in sociology and social work, a minor in business — and a year of graduate school as well. I took full advantage of the opportunities that were given to me.

I missed half of my senior season with an ankle injury, and I went undrafted. But I was offered a contract to attend the San Francisco 49ers’ rookie minicamp. I did everything I could to prove I belonged: I was the first in line for every drill. I ran full speed on every play. I studied the playbook every night.

At the end of training camp, I was cut — but I was signed to the practice squad. I had fulfilled my dream of becoming an NFL player.

I was with the 49ers for three seasons, and I made the active roster in 1998. I also spent time with the Washington Redskins, and I played for two years in NFL Europe before an injury finally ended my career for good.

As disappointing as that was, I looked at it as yet another opportunity. I formed a nonprofit organization, First & Goal, Inc., to work with young people. We’re developing the leaders of tomorrow through mentoring and student leadership programs.

At each point in my life, when things could have gone astray, I didn’t let them. I made smart choices, worked hard, didn’t give up — and put myself in a position to succeed.

But I certainly didn’t do it alone. I had the support of many caring adults along the way. My parents. Ms. Williams, my fifth-grade teacher. Ms. Landheart, who took me in when I was homeless. Many other teachers who helped me succeed. Every football coach I ever played for. 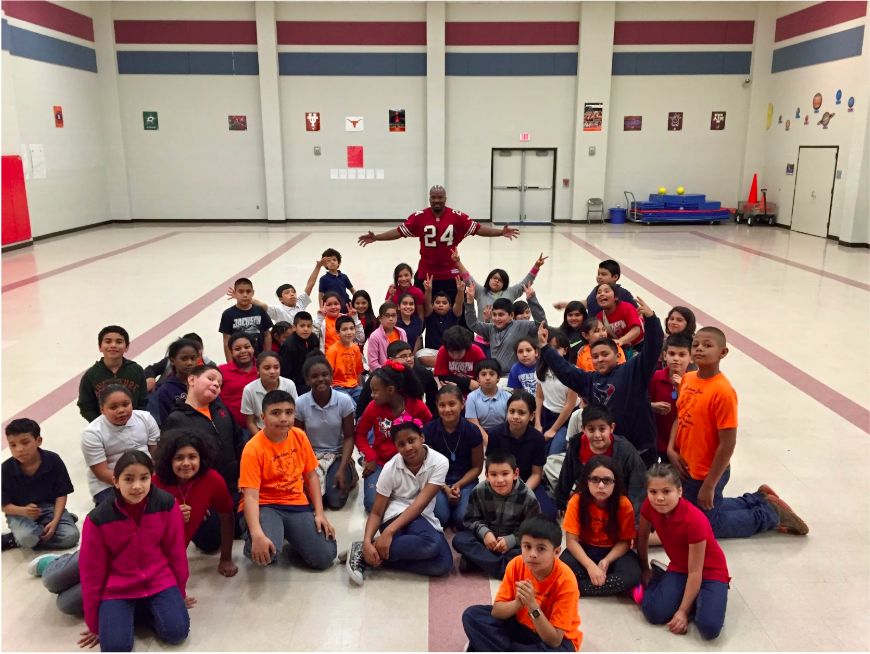 I tell students: There is always someone you can lean on for support when things are tough. But you have to be willing to ask for help. The people in your lives whom you can count on might not know you’re struggling. That’s why you have to use your voice. Advocate for yourself. Don’t be afraid to speak up.

Taking advantage of your opportunities also means making sacrifices. You have to be willing to give up some things that aren’t as important. When I was fighting to make the 49ers roster, there were nights when I got home after a long day of practice, meetings and film study — and I would have loved to have just played video games until late at night. But instead, I studied my playbook, trying to get better, and then went to bed early to get plenty of rest. I didn’t want to let this opportunity go by without knowing I’d done everything I could to make it work.

My experience is proof that dreams can come true, if you believe in yourself and you work hard to succeed. Students should know it can happen for them as well.

While it’s true that not everyone can become a professional athlete — I know I’ve been blessed with a certain amount of natural talent — we can all attain some level of success. Sometimes barriers arise that are too steep to overcome, forcing us to rethink our dreams. Although our dreams might change, the pursuit of success doesn’t have to. As long as students keep working hard and don’t let setbacks derail them, they, too, can achieve high goals.

Former San Francisco 49er Tyrone Smith is founder and president of First & Goal, Inc., which empowers youth to be effective members of society. He is also the author of Outside the Huddle: Steps to Developing a Game Plan for Life. Tyrone will speak with students nationwide Feb. 12 in a virtual chat about how success is defined by how we deal with adversity — and whether we make the most of our opportunities. You can sign up here.

Former San Francisco 49er Tyrone Smith is founder and president of First & Goal Inc., which empowers youth to be effective members of society. He is also author of Outside the Huddle: Steps to Developing a Game Plan for Life. Tyrone will speak with students nationwide Feb. 12 in a virtual chat about how success is defined by how we deal with adversity — and whether we make the most of our opportunities. You can sign up here.