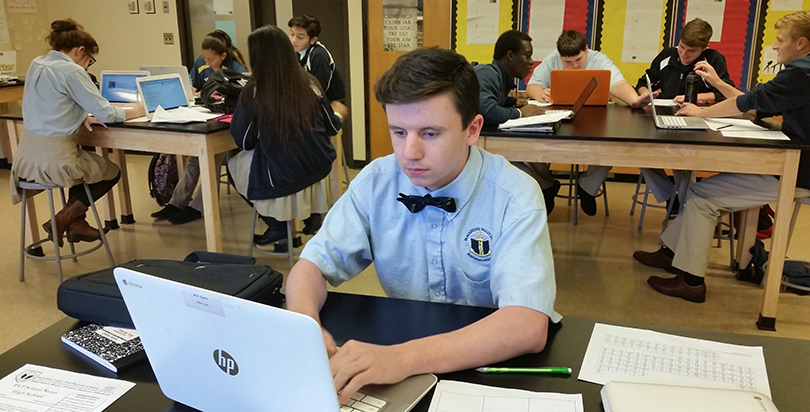 In the 2015 documentary Most Likely to Succeed, the filmmakers focus solely on the education revolution known as High Tech High, the San Diego charter school launched in 2000 that today has grown to 13 schools, including elementary and middle schools.

Founder Larry Rosenstock has built out a vision of education that truly is different: classroom schedules that aren’t divided neatly by subjects, teachers whose contracts are renewed annually, no ringing bells to signal periods. All the learning is project-based, meant to stimulate the soft skills such as collaboration, time management, resourcefulness and, above all, grit. In short, the High Tech schools are a vision of student-directed learning that emerged way, way before other schools settled on the same vision. The movie warrants watching; Rosenstock’s schools merit visiting.

Today, there are a dozen or more school models that not only have caught up with High Tech but perhaps offer equally promising visions, several of which may be easier to replicate than High Tech High. Many of the schools are underwritten by Next Generation Learning Challenges, a Gates Foundation version of next-generation philanthropy.

To sketch out where charter schools are headed in the future, I profiled four charters that qualify as next-generation schools in my recent book The Founders: Inside the Revolution to Invent (and Reinvent) America’s Best Charter Schools. You can see all four snapshots at The Founders microsite; more on Rhode Island’s Blackstone Valley Prep below:

Watching a 15-year-old fiddle with his laptop in this out-of-the-way parish school converted into a charter school seems like an odd way to catch a glimpse of education’s future.

But that’s what Ray Varone is revealing as he fires up his Chromebook to demonstrate.

A lot went into this auspicious moment. You start with the school, Blackstone Valley Prep, already a standout for successfully drawing a mix of middle-class and poor students. Then you stir in a sizable grant from Next Generation Learning Challenges to experiment with ways to rethink high school.

Finally, and I suspect this may be the most important development, you wrap it all together with Summit Basecamp software, a personalized learning tool released by perhaps the most innovative charter group in the country, California’s Summit Public Schools. Their ideas were given wings with a team of top code writers donated by Facebook. Only a few schools got chosen as early adopters, including Blackstone. Although new, the learning program appears to be off to a promising start.

And so it all comes together with Varone, who is proudly skimming the Basecamp program. And as anyone of a certain generation who has watched a teenager demonstrate software knows, your first reaction is to say: “Wait, slow down! Show me that again!”

Blackstone’s charter high school is at the pointy edge of the search for the Version 3.0 high school, the school that will point us toward the future: Where is it and what does it look like?

The search shouldn’t be that hard. For the past several years, some of the country’s brightest tech minds and wealthiest foundations have joined hands with the White House to solve one of America’s most remedy-resistant problems: High school is boring.

I know, I know — you knew that already. From firsthand experience. Only things have gotten worse.

If you look at test scores, school improvement efforts turn up in elementary and middle schools but not high school. High school is the place where too many students drop out, especially in ninth grade, just as students get their first taste of it. High school is where they get diplomas that too often prove worthless when they try to take college placement tests. It’s so bad, movies are being made about it.

Sure, there are private schools and wealthy suburban schools where the quest for getting into top colleges is so intense that some students wilt, or worse, under the pressure. Trust me: These students may draw a lot of media attention, but they are the exceptions.

For most high schoolers, the problem lies on the opposite side of the intensity scale. Low-income and minority students, who now make up roughly half the nation’s school population, either don’t make it to college, get quickly disqualified from taking for-credit classes or drop out partway through.

So what do all these genius high-tech school reformers have in mind? There are a few places around the country where you can get a glimpse, and one of them is Blackstone.

First, some background. As I reviewed in an earlier chapter, the first research pinpointing key problems within a charter school — and suggesting possible solutions — came from a charter, KIPP, whose leaders were disappointed with the data revealed in a College Completion Report done several years ago. Students they thought were well equipped for college work dropped out at higher rates than expected.

Put more simply, culture-intense charter schools that dramatically bumped up K-12 learning discovered that once their students sailed past the gravity field of that intense classroom culture, they found themselves ill-equipped to survive on their own.

In short, they lacked “grit.”

That research led to a lot of dramatic changes at charters, with KIPP leading the way. What was needed, the charters concluded, was a full-speed shift to personalized learning, building the sticky, gritty independent learning skills that would propel them through an often-lonely college journey. The term of art: self-directed learning.

The Basecamp software, which Varone is using, turns learning upside down. Actual learning time is up to the student, to do at designated times within school or at home. Classroom time is more for projects, group collaborations and advice from the teacher on how to manage the “Personalized Learning Plan” (PLP).

Not surprisingly, the Basecamp software arose out of Silicon Valley. There, Summit charter schools, already pushing the edges of personalized learning, caught the attention of Facebook CEO Mark Zuckerberg when he visited in 2013. Zuckerberg lent Summit a team of code writers, and thus was born Basecamp, a PLP for all subjects, grades 6 through 12.

So what does this new learning style look like?

The package comes loaded with about 200 “deeper learning” projects as well as 700 “playlists” such as videos and articles — anything that provides deeper knowledge. Basecamp is also adjustable, so schools can add and subtract what they think is important.

Blackstone did a lot of that, especially with math. For this school year, 19 schools were chosen as early adopters, including Blackstone.

Everything seems like a blur as Varone cycles through his subjects, showing all his projects — those in red are still due; those in blue are completed. The heart of the software, everyone agrees, is the steady, vertical “pacer line” that cuts through all the projects. That shows students where they stand on each assignment and whether they are ahead of or behind schedule — creating a benchmark even as students are allowed to move at their own speed.

Pointing to the pacer line in each subject, Varone proudly demonstrates his progress in getting tasks completed. “We’re getting used to doing this on our own, so we’ll be reading in college. In college, you’re not going to have teachers there asking you questions all the time, so you have to learn by yourself.”

I agree: His answer sounds canned. But there was nothing canned about what he was demonstrating on the Basecamp software: This was self-directed learning, the holy grail of any next-generation reinvention of high school.

When Blackstone Executive Director Jeremy Chiappetta and others set out to design a high school for rising Blackstone students, they drew on KIPP’s lessons learned about reshaping academics around developing skills students would need to persist through college. “We knew our middle school model, while a great foundation of academic skills and discipline and focus and habits, would not be the driving foundation for our high school.”

Blackstone’s search for a new model drew a $450,000 grant from Next Generation Learning Challenges, followed by the decision to apply for early-adopter participation in Basecamp. That status triggered liberal support from Summit, including Blackstone staffers traveling to Summit for training, and Summit providing a former teacher for personal assistance.

All that, in turn, led to Varone sifting through his PLP and coming away satisfied that he was on top of things and ready for college work. And it didn’t seem to be boring him at all.

That’s how it’s supposed to work, says Diane Tavenner, Summit’s founder and Basecamp’s chief engineer. “It’s about giving students ownership and responsibility. The adults have the role of facilitating learning and mentoring and guiding.”

Blackstone is one of 24 partner schools around the country piloting the platform. But no one should look at Basecamp as the “one” model to which all charters will evolve. There is no single model, Tavenner told me. “We’re moving into an environment of continuous improvement … The model is forever changing and adapting.”

A very Silicon Valley way of looking at the world — and charters.

This is an excerpt from the new Richard Whitmire book The Founders: Inside the Revolution to Invent (and Reinvent) America’s Best Charter Schools. See more excerpts at The 74; watch all the videos, download the book and explore the Founders Oral History atThe74Million.org/TheFounders.