Study: Weakening Tenure in Louisiana May Have Caused Thousands of Teachers to Quit 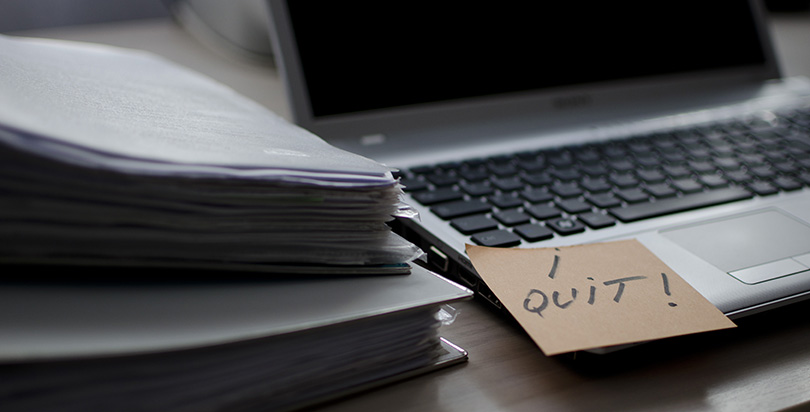 After Louisiana watered down tenure protections, teacher turnover spiked, according to a new study released today by the Education Research Alliance at Tulane University. The research gives credence to concerns that limiting teacher job protections can make the job less appealing and increase teacher attrition.
“When we do remove some tenure protections,” lead author Katharine Strunk of the University of Southern California told The 74, “we need to be cognizant of the effect on the workforce.”
The report cannot net out the overall effects of the policy change or distinguish between teachers who quit or retired— perhaps because they were unhappy with the prospect of losing tenure — versus those who were fired for poor performance. It also has methodological limitations in its ability to isolate the impact of a single policy change on teacher turnover.
Sydni Dunn, a spokeswoman for the Louisiana Department of Education, said in a statement that the department was most interested in seeing how the changes affected students, which is not dealt with in this study.
“While we had hoped for a more explicit discussion [in the report] of the effects of significant changes to retirement policy by the Louisiana legislature in 2010, 2011, and 2012, we believe the most important research will come when we can trace the impact of specific policies to student achievement,” Dunn said.
Louisiana revised its teacher retirement policy around the same time it made it easier to dismiss tenured teachers and more difficult for newly hired teachers to receive tenure.
The Education Research Alliance study comes as many states have made dismissing teachers less arduous, and a number of lawsuits brought by parents and advocacy groups in various states have challenged tenure protections as unconstitutional and potentially harmful to students.
After tenure is weakened, some teachers head for the exits
In early 2012, Louisiana — spurred by federal Race to the Top incentives and a nationwide push to tie teacher performance more closely to evaluation — significantly scaled back teacher tenure. Teachers could now lose tenure based on a single low rating under a forthcoming evaluation system, and new teachers could gain tenure only by receiving a “highly effective” rating in five of six consecutive years, according to the law.
The new study, released as a research brief, used the introduction of the law to examine how teacher turnover was affected. They looked at the years after the law passed but before any teachers risked actually losing tenure under the evaluation system.
The authors found a substantial increase. A year and a half after the law was passed, annual turnover had jumped from around 7 percent to over 10 percent.
“Our estimates suggest that the tenure reform is responsible for the exit of 1,500 to 1,700 teachers in the first two years after the removal of tenure protections,” the researchers write. Strunk said she was surprised at how large the effects seemed to be. 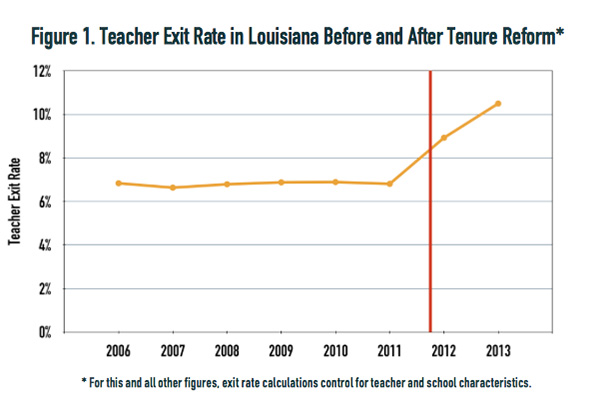 Source: Education Research Alliance
Turnover increases were especially large among teachers close to retirement, as well as those in low-rated schools. These results may be particularly concerning because struggling schools often have the hardest time filling vacancies. 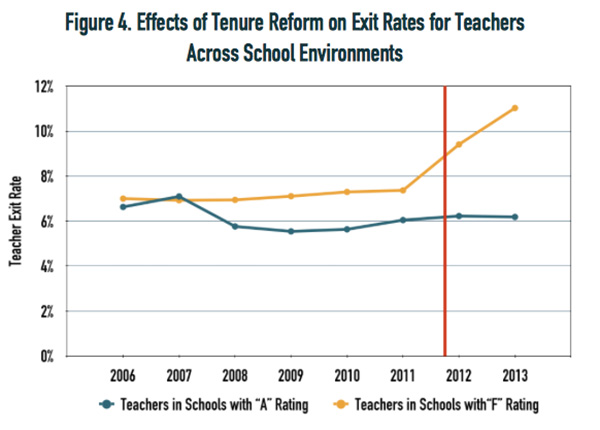 Source: Education Research Alliance
“The tenure reform created substantial churn in the Louisiana teacher workforce,” the study states. “Any sudden increase in teacher exit rates places a burden on school districts to fill vacancies with qualified replacements.”
Study comes with several caveats
The study has a number of significant limitations, however.
Isolating the impact of a specific policy reform is always challenging — especially when a number of changes took place at similar times, as was the case in Louisiana.
The spike in turnover among teachers near retirement is especially notable, since in 2010 and 2011 Louisiana implemented a handful of changes to retirement rules that might have encouraged teachers to retire sooner.
The authors acknowledge this concern but say they attempted to control for it. “After considerable additional investigation, we see no evidence that these non-tenure factors played a significant role. The timing of these other policies (related to teacher retirement) does not line up with the 2012 increases in teacher turnover.”
Still, it’s not entirely clear when to expect the tenure policy to impact teacher turnover. The legislation did not eliminate tenure — in fact, the soonest a teacher could lose tenure under the new evaluation system was after the 2013–14 school year.
It’s possible, of course, that teachers were responding to the threat of tenure removal down the line, but it’s also plausible that they had a delayed response to other policy or economic changes.
It’s also surprising that teachers who could already retire with full pension benefits — and so potentially had the least to lose from a reduction in job security — responded most strongly to the tenure changes, according to the study.
Another important limitation of the research is that the authors can’t look at whether teachers chose to quit or were fired, and they can’t examine the relative effectiveness of teachers who left versus those who remained.
The theory of action for reducing teacher job security presupposes that attrition is not inherently bad, and that allowing for the easier dismissal of less-effective teachers will lead to positive results. In that sense, increased turnover may be a feature rather than a bug — it all depends on who is turning over.
Strunk said that, although she couldn’t study it directly, she suspects that the changes were driven by teachers voluntarily leaving since the strict evaluation system was not up and running and teachers maintained some tenure protections.
Weakening tenure may have benefits — as well as costs
Other studies have shown the potential benefits of loosening teacher tenure rules. For instance, research in Washington, D.C., Chicago, New York City, and Charlotte, N.C., have found that students can benefit when struggling teachers leave or are dismissed. Crucially, in these studies it appears that less-effective teachers were replaced by those who were higher-performing.
The latest study contributes to a small, but perhaps equally important, line of research, showing the potential costs of such reforms. The overall impact is unclear.
“I don’t see this [tenure] policy as being unfavorable,” said Strunk. “I don’t think we know the impact on the quality of the teaching workforce.”
Other research suggests that teachers value tenure protection and that reducing it would essentially be a hit to their compensation. One study found that school districts with longer probationary periods — the time before teachers are eligible for tenure — pay higher salaries, presumably to offset the additional years of weaker job security.
Simulation studies and surveys of teachers also show they place a premium on tenure. A recent study found that Houston’s implementation of a more rigorous evaluation system — that could be used for dismissals — coincided with an across-the-board increase in teacher attrition, though the researchers couldn’t say whether the tougher evaluation was the cause.
The scope of the effect remains an open question. Research in North Carolina and Washington didn’t find clear jumps in turnover after both states increased how long it took teachers to receive tenure. A study in Chicago showed that the city’s pilot evaluation system only caused the lowest-performing teachers to leave at higher rates — other teachers were unaffected. Research on other forms of education accountability measures, like No Child Left Behind, haven’t consistently shown that they lead more teachers to quit.
The fact that new evaluation systems continue to give the vast majority of teachers high marks might also dampen negative effects of reducing tenure. Louisiana is no exception: In the 2014–15 school year, less than 1 percent of teachers were judged ineffective, while 42 percent scored highly effective. It’s possible that the initial law made teachers worry that mass firings would ensue; it’s possible that with few teachers actually receiving low scores, initial concerns have diminished. Strunk says she hasn’t looked at data beyond 2014, so that remains a topic for future research.
But if reducing job security amounts to a reduction in teacher compensation, the obvious solution is to pay teachers with fewer tenure guarantees more, according to Strunk.
“If we’re going to [weaken] job security … we may need to compensate for that elsewhere,” said Strunk.
Washington, D.C., for instance, has been perhaps the most aggressive district in the country in terms of firing teachers deemed ineffective, but it also pays teachers high base salaries and substantial bonuses. Some teachers in the district earn well into six figures. This may help explain why teachers who leave are replaced by those who are better.
Other places in the country have not followed this path: Recent research shows that teacher pay relative to other professions has flatlined or even declined in recent years.
Disclosure: Lawsuits challenging teacher tenure in New York, Minnesota, and New Jersey were spearheaded by the Partnership for Educational Justice, a nonprofit group that was founded by Campbell Brown. Brown is the co-founder of The 74; she had no role in the editing or reporting of this story.
Submit a Letter to the Editor
February 22, 2017