Students in Texas Teach for America Classrooms Gain in 8 out of 9 Subjects, New Research Finds 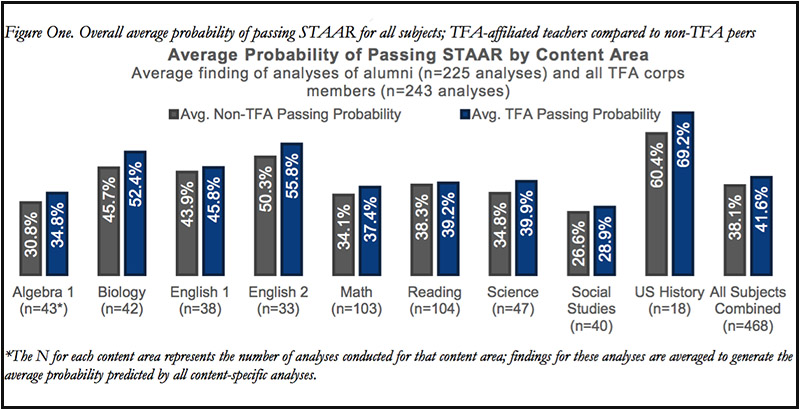 Students taught by Teach for America teachers in five Texas regions match or outpace their peers in eight of nine academic subjects — an advantage that is strongest for black and Latino students, children learning English, and traditional district-run schools, according to new research. Pupils taught by veteran teachers who started as TFA corps members get the biggest boost.

The newly released evaluation is the first to use Texas’s statewide annual assessments to compare students taught by current and former Teach for America corps members with those taught by traditionally trained teachers. Commissioned by TFA and conducted by researchers at Southern Methodist University, the study examined data spanning six years, nine content areas, and 10 grade levels.

In keeping with past evaluations of the program’s effectiveness by a variety of researchers, TFA teachers had a positive impact on student performance in math and performed about the same as their traditionally trained peers in reading instruction.

The new report also considers teacher effectiveness in a number of subject areas, including algebra, biology, social studies, and U.S. history. With the exception of reading, where the impact was statistically insignificant, TFA-affiliated teachers had a positive impact across the board.

The report also took a first, early look at “saturation” — whether a concentration of TFA-trained teachers in a school or district has an impact. It found a positive relationship between student performance and a cluster of TFA-affiliated teachers in 53 percent of cases.

“Importantly, the bulk of the benefit from TFA seems to come from alumni as opposed to corps members,” researchers noted. “This is no surprise given the on-the-job learning that occurs during any teacher’s first years in the classroom. This finding in particular serves to underscore the importance of retention. Strategic efforts to keep TFA alumni in classrooms is warranted as is ongoing study of what conditions catalyze long term teacher tenure.”

Students taught by TFA alumni are 7 percent more likely to pass the state exams than peers taught by veteran teachers who did not enter the classroom through the alternative training program. TFA-affiliated teachers’ impact on black and Latino students and students with limited English proficiency was also greater.

Survey: Nearly 90 Percent of Principals Who Supervise TFA Members Would Recommend Hiring Them

Researchers at SMU’s Center on Research & Evaluation (CORE) used Texas Education Agency data to assess the impact of TFA teachers in five regions — Austin, Dallas-Fort Worth, Houston, the Rio Grande Valley, and San Antonio. The evaluation builds on previous studies but is the first to examine TFA’s impact in Texas high schools and to use student performance on the State of Texas Assessments of Academic Readiness (STAAR) assessment.

In addition, researchers noted whether students attended a charter or traditional district school, the school’s state rating, its poverty level, students’ race, and the number of TFA and non-TFA-affiliated teachers.

The study was designed to yield information about specific conditions that TFA can use for ongoing improvement efforts. The topline findings are the synthesis of 699 data analyses, broken down so results can be used to pinpoint strengths and weaknesses in each region studied.

Home to 1 in 10 U.S. public school students, Texas is a majority-minority state where more than half of students are economically disadvantaged. It’s also one of the first places where the 29-year-old program placed corps members, all of whom receive intensive training and pledge to work in high-poverty settings for two years.

“We’re really excited to see the impact our teachers have beyond their first two years in the corps,” said Grant Van Eaton, TFA’s managing director of research and insights. “The most important thing for us is that our corps members and alumni are having a positive impact on students.”