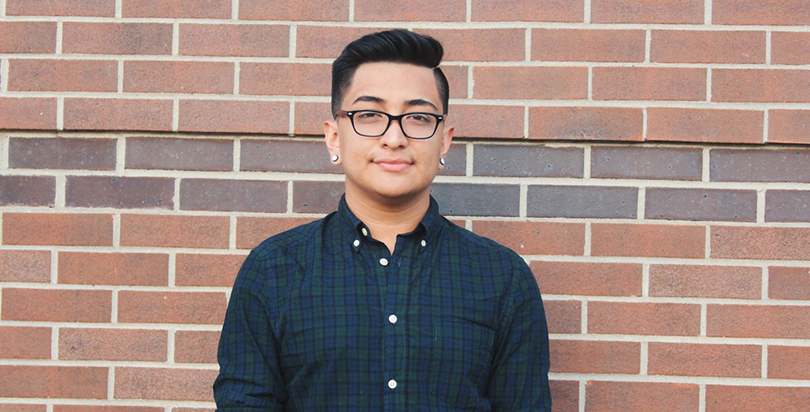 Daniel Castillo was in middle school when he learned he was an undocumented immigrant from Mexico. On their way to his mother’s job from his Georgia school, his family got into a car crash, and Castillo watched her fear of the responding police officers with bewilderment. When she couldn’t produce a license, she was taken to the police station.
The moment he saw his mom in the cop car, “she didn’t have to tell me — I just knew,” said Castillo. “After that night, we all had a talk. She kind of explained what she could to a sixth-grader about our situation.”
As Castillo grew up, their “situation” — being undocumented and poor — informed every aspect of their lives. Fearing deportation, his mother constantly warned her young children not to open the door to anyone while she worked long hours cleaning houses. In high school, Castillo had to work rather than joining in after-school activities. While his mostly white classmates happily prepared for college, Castillo — barred from the state’s top universities and ineligible for in-state tuition at community colleges because of his immigration status — resigned himself to never getting a degree.
His fortunes changed when he was referred to TheDream.US, a scholarship program for aspiring college graduates who were part of President Obama’s Deferred Action for Childhood Arrivals (DACA) program, which grants undocumented youth temporary legal status and freedom from deportation. Castillo, 19, is now a freshman at Eastern Connecticut State University.
But now, his future, and that of DACA itself, is uncertain. President-elect Donald Trump has vowed to end the program and ramp up deportation of undocumented immigrants, raising fears that the DACA list could be used to provide names for expulsions. Students who are attending college through DACA-linked scholarships worry they will lose their funding and be unable to complete their degrees.
Rethinking advice to students
Over the past week, education groups and schools with large numbers of undocumented students have been scrambling to rethink how they share information with the government and to provide students and their families with support and accurate immigration information.
“We’re behind the eight ball. We probably should have had a plan four or five months ago on what to do if it was going to be President-elect Trump,” said Tom Torkelson, chief executive officer of Texas’s IDEA Public Schools charter network, which educates many undocumented students in the Rio Grande Valley near the Mexican border.
The Chicago-based Noble Network of Charter Schools, which arranges scholarships for its DACA graduates at 21 partner colleges, has been reaching out to reassure recipients that they will continue to receive funding for their education. “There were several students who were scared, felt targeted and did not attend class,” said Aidé Acosta, the network’s DREAMer supports manager. “There is a bigger fear about deportation because we just don’t know.”
TheDream.US has modified its admissions requirements to assist undocumented students who want to go to college. Under the old rules, applicants had to prove they had DACA status or had asked for it. Now, students will be able to sign an affidavit stipulating that they are DACA-eligible even if they haven’t applied.
Bringing kids out of the shadows
President Obama started the DACA program by executive order in 2012, allowing youth who arrived to the United States before age 16, attend school or graduated from high school, and have no criminal convictions — known as DREAMers — to obtain temporary legal status. The program also provided work permits and relief from deportation.
But during the 2016 campaign, Trump vowed, “We will immediately terminate President Obama’s two illegal executive amnesties, in which he defied federal law and the Constitution to give amnesty to approximately 5 million illegal immigrants.”
Because undocumented families fear that DACA recipients’ records, which are kept with the Department of Homeland Security, could be used in deportation proceedings, the immigrant youth advocacy organization United We Dream and other groups have recommended that first-time applicants wait. Those who are up for renewal are encouraged to apply because their records have already been shared with the federal government. But it is unclear whether DACA status would protect recipients from deportation if the program were eliminated.

Educators are y'all ready to fight with us? Are you committed to ensure that we are #HereToStay?

Last Tuesday, Rep. Judy Chu, who represents California 27th District, urged the Obama administration to “take all legal measures” to protect young people who sought temporary legal status through DACA.
“These children and families provided extensive amounts of sensitive information to their government, including fingerprints and relatives’ home addresses, with the understanding that it would not be used against them. We promised them security,” Chu said in a statement. “Now they are facing a nightmare. When we asked immigrants to come out of the shadows, we never imagined the election of a candidate who ran on a policy of mass deportation.”
Public affairs officer Joanne Ferreira said the Department of Homeland Security still encourages people to apply for DACA, but she would not speculate on how the new administration would handle the program. Currently, DACA information is not given to Immigration and Customs Enforcement or Customs and Border Protection except under special circumstances.
Trying to predict an uncertain future
Torkelson said IDEA is telling families who ask what they should do about DACA to consult a lawyer. If they are under a deportation action, they should not apply, Torkelson said.
In general, “we’re not saying ‘Don’t do it,’ ” he said. “We’re just saying right now we don’t feel like we can make a recommendation for you to do it.” Those who already have DACA status should feel free to apply for renewal, and the network will “leverage our contacts to get those people expedited for their approval,” Torkelson said.
At Noble, Acosta has told students it’s not clear yet what Trump plans to do and advised them to continue to work hard to complete the semester. The charter organization also hosted a meeting last week with the National Immigrant Justice Center so families could ask about DACA and other immigration-related questions.
TheDream.US offers two college scholarships, which award up to $25,000 and $80,000 to DACA students who are pursuing a bachelor’s degree. After the election, the organization emailed recipients to reassure them that it plans to continue funding the scholarships even if the next president ends DACA. “We remain as committed as ever to these students,” said Candy Marshall, president of TheDream.US.
Ever since that announcement, the group has received an influx of responses from grateful college students.
“I am a first-year Dream.US scholar. When I received this email, it honestly brought tears to my eyes. It’s amazing to see that we can count on each other. … We are slowly escalating towards a future that none of us [sic] knows what to expect. My biggest concerns and priorities has always been my education, my job, and my family,” one student wrote.
“This scholarship has once again helped me fulfill my dream of attending a university. I’m very grateful to hear that your team will continue to help us if DACA is taken away. My family and I are immensely thankful for this. You have cleared many dreamers’ minds concerning our education. Once again, thank you for all the support!”
Seeking signs of hope
Marshall is optimistic that as “a smart businessman,” Trump will see the value in maintaining policies that create pathways for undocumented youth to go to college and contribute to the workforce.
Castillo is also hopeful, despite the difficulties of the past two weeks. On election night, he and friends at Eastern Connecticut State University watched with shock as the results revealed Trump would be the next president. He called his mom at 4 a.m., thinking she would be asleep, but the results had kept her up too.
“She was awake, and she knew. I just wanted to be strong for her,” he said. “I ended up breaking down and crying. She just reminded me, ‘Remember why you are there. Remember why you are in college. You have to keep going.’ ”
Castillo, a leader in student government and president of an immigration advocacy club, passes that message on to other undocumented students on campus who have approached him with questions. He said he is resolved to complete his college degree, go to law school and become an immigration attorney.
“That fear [of deportation] is still in the back our minds,” he said. “We can’t let fear overpower us. Like my mom said, ‘Remember why you are here.’ And I’m here to finish school. I’m here to graduate.”
Submit a Letter to the Editor
November 20, 2016