Student Voice: My Mother Is Undocumented. My Father Was Deported. I Am the Resistance 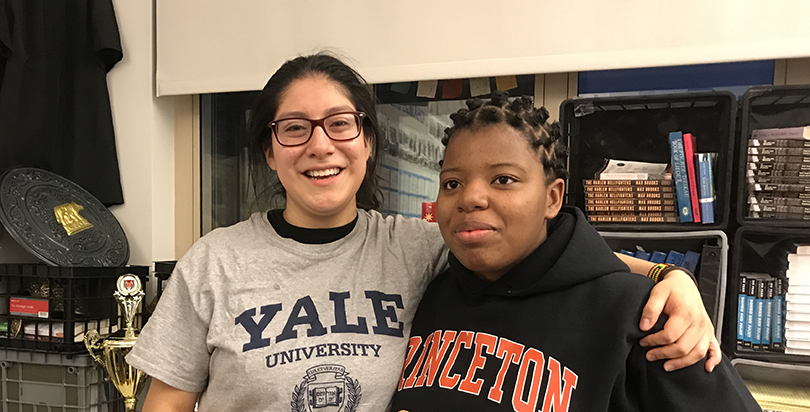 Last fall, I was so sure my country would do the right thing that I didn’t even bother to stay up to watch the results of the election.
It was the beginning of my senior year, and as I applied to college, I found myself thinking that I had to find ways to accurately describe who I was without upsetting anyone. I didn’t think I could be honest about my anger, my mistrust, and my pain.
I was wrong both times.
I know now that speaking out is resistance.
It is resistance to which I am committed, because Nov. 9, 2016, is a day I will never forget. I remember not being able to breathe as I checked the results while my undocumented mother slept nearby. My reality means she might not come home one day.
I have fought for equal representation alongside my Speech & Debate team throughout high school, but this year it matters the most.
Months before anyone considered Donald Trump a serious presidential contender, I began writing an Original Oratory to compete at Speech & Debate tournaments on the local and national circuit. In Original Oratory, competitors write a personal speech about a topic they care deeply about. It was the first time I had ever dedicated time to openly expressing my feelings about immigration and racism.
Delivering this speech every weekend at tournaments is what the resistance looks like.
It was actually a week before the election when I decided to rewrite my college essay because I would not submit a watered-down version of myself to anyone.
I wrote about how I learned to speak English alongside my then-25-year-old mom. I explained how I resented being Mexican for most of my life, and how growing closer to my white teachers made me more distant from my brown mother. How I wanted to be white, but I was not. I wrote about my journey: tutoring brown-skinned Spanish-speaking children and learning to love the depths of my Nahuatl soul.
I refuse to step back into the shadows that the administration and its supporters want me to stay in. Nuestra voz cuenta. Our voice matters.
I was never surer of that than when I saw now-President Trump’s campaign split this country in half.
On Inauguration Day, I was at school, and my teammates and I were getting ready for a national tournament at Columbia University. We circled up and delivered our speeches at the same time a man who did not believe in us took office. The next day, my team of mostly women of color had our own Women’s March when we placed as double finalists at Columbia.
This presidency has opened a door for hate and bigotry, but my team and I have countered it at every turn. Columbia. Emory. Pennsbury. U Penn. Harvard. We have been finalists everywhere we have gone.
In March, our team doubled its number of students who are qualified for the New York Speech and Debate State Championship. We are bringing the much-needed voices of marginalized communities to the world of competitive speaking.
Now, how do I accurately describe myself? I am the daughter of Mexican immigrants in Trumpland and I fear for the lives of people who look like me. My father was deported when I was 11. My existence is everything our president has said he hates, but that has not stopped me.
In December, out of more than 5,000 applicants, I was one of 871 accepted early to Yale University, where I intend to study in the Race, Ethnicity, and Migration program starting in the fall.
I, alone, am not the face of the resistance. Nosotros, todos, lo somos. To my Mexican hermanas y hermanos, if I can do it, so can you. You are not alone. This is what the resistance looks like.
Esther Reyes is a senior at Achievement First Brooklyn High School in New York.
Submit a Letter to the Editor
May 14, 2017