Stewart: Finally, Unions and Reformers Might Agree on Criteria for School Closures 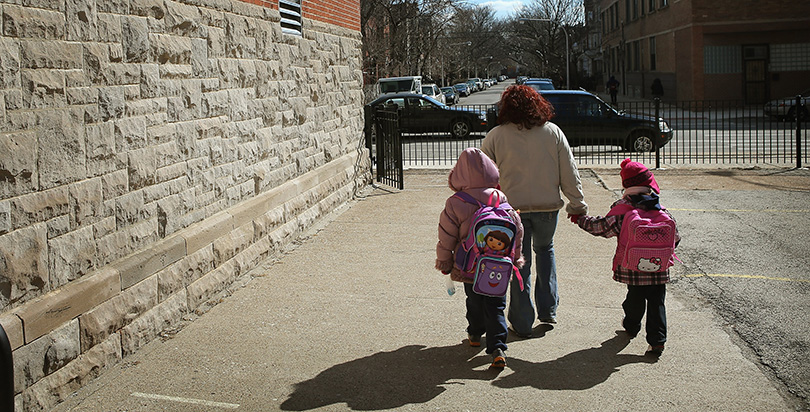 Alan Singer is not the guy you expect to support school closures. As a former union teacher in traditional New York public schools, and a current university professor who teaches teachers, you might expect him to follow his comrades who have called school closures targeting black communities in cities like Chicago, Detroit, and Newark the new Jim Crow.
Now he is breaking from the herd and calling for the closure of not only a school, but the closure of what amounts to the largest independent school district (Success Academy) that sits within America’s largest system of schools (New York City).
Why?
Seeing a disturbing incident captured on viral video showing a Success Academy teacher yelling at a student converted him into a proponent of school closures:
This is about a charter school network that systematically terrorizes young children to maintain total control over their behavior. This is about the Success Academy Charter School Network that should be investigated by state educational officials and the local district attorney’s office and probably shut down – permanently.
Ok. I tricked you a little.
The truth is Singer is only supportive of closing a network of charter schools. The Singer quote above comes from his Huffington Post article “Success Academy’s War Against Children,” that offers two telling insights.
First, the piece makes the goal evident: to raise Success’ negatives, lower their positives, and eventually kill them off so their students return to the educational monopoly controlled by labor cartels. There can be no two-state solution between charters and union-run schools.
Second, whether he wants to or not, Singer sets a new criteria for school closures.
This passage has his hidden criteria that could easily apply to all schools in large urban districts:
The children are probably six-years-old and all appear to be children of color, either African American or Latino. During the math lesson while this little girl is being berated by the teacher, who is White, twelve children are seen sitting attentively, backs upright, hands folded in their laps, in a tight circle. Every child is in uniform. They do not smile or giggle. They are not allowed to slouch. They are not allowed to squirm. They are not allowed to be children. They are terrorized into obedience fearful of being the next child targeted by a White authority figure.
We’ll unpack that shortly, but as an aside I found some pictures of this holy terror that Singer speaks of:
Look at this horrible lack of joy… 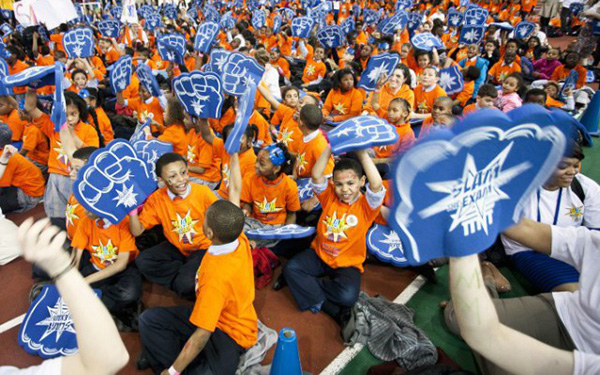 And, this racist obsession with posture and order that we would never accept for white kids… 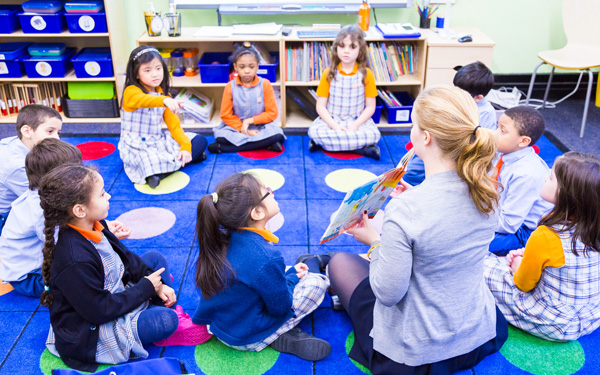 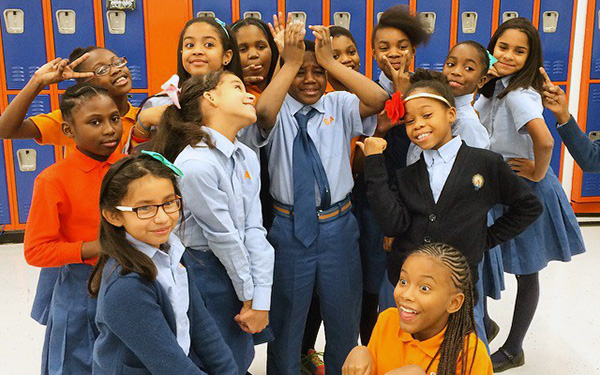 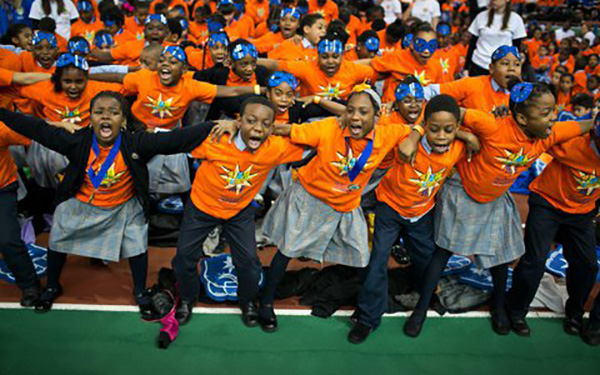 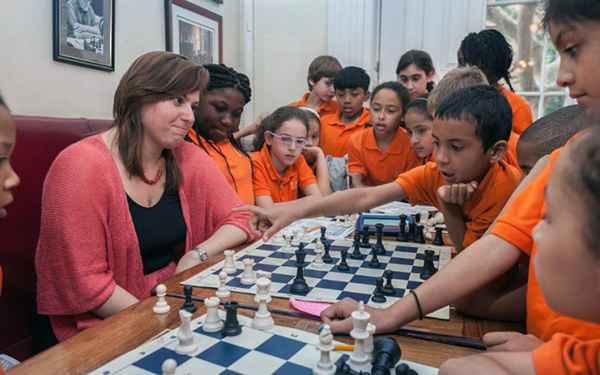 You get the picture(s). This school should close. Today.
Now, back to Singer’s criteria for the acceptable closure of schools. These are the four criteria he uses to suggest closing Success Academy:
If that’s our new criteria, it could be a boon for school reformers who have long struggled with how to close chronically under-performing traditional schools in cities where poor kids of color are terrorized by illiteracy and innumeracy.
Now, let’s see how it applies.
Teachers losing it
Charlotte Dial, the teacher caught berating a student at Success, is hardly the first to find Internet fame this way.
Barbara Williams, a 14-year veteran teacher with the Riverdale school district in Ohio, was captured on surveillance video violently shaking up a 6-year-old as he was returning to class after using the restroom.

Here is Letesha Blue, a teacher in Arundel County, Maryland who is caught on camera having no patience for white tears…
Here’s one from Prince George’s County. Yep, that’s a teacher using a belt to break up a student fight.
Next up, a 20-year veteran teacher of the Salem-Keizer School District who rips the shirt off a girl and humiliates her.
These videos are so abundant that I wonder why we haven’t considered that American public education has a serious culture problem. The incidents get more and more outrageous. How much more abuse can we stand before we threaten to shut the schools down?
Discipline
You can find traditional public schools across the country that have strict discipline. Education Secretary Arne Duncan mentioned this in 2014:
According to CRDC data, schools in South Carolina suspended 12.7 percent of students—about one in eight students during the 2009-10 school year. By contrast, schools in North Dakota suspended 2.2 percent of students—about one out of every 50 students.

I am absolutely confident that students in South Carolina are not six times more likely than their peers in North Dakota to pose serious discipline problems worthy of an out-of-school suspension. That huge disparity is not caused by differences in children; it’s caused by differences in training, professional development, and discipline policies. It is adult behavior that needs to change.

Ready to shut down public education in South Carolina? I mean, how can we be so immoral as to allow them to stay open for business?
Onward.
Discrimination
Last year the U.S. Department of Education’s Office for Civil Rights received a record 10,000 complaints of discrimination in public schools. Forty-six percent of those claims were for discrimination against students with disabilities (22% for race discrimination).
Minneapolis, St. Paul, Spokane, Los Angeles, the Bay Area, Pomona, the state of  Georgia, among many other places, are among the cities and states that have been under federal investigation.
New York’s East Ramapo school district was dinged by federal investigators for racial discrimination and giving “a disproportionate number of out-of-district placements for special-education students … to white children.”
It’s amazing that people like Singer can look at a the situation at Success Academy and say – in spite of incredible academic performance with low-income children of color – the school is engaged in a “war against children,” when not far from him, in East Ramapo, a democratically elected board has been on a campaign to send public money to their private interests while starving black schools of resources.
A “war” indeed. But no calls to shut the district down. Why?
Student push-outs
Are we really so naive as to believe students push-outs stem from a unique practice at Success Academy specifically, or charter schools generally?
Student tracking, sorting, and push-outs are not only pervasive in traditional districts, they were actually perfected there.
Mr. Singer should know because Franklin K. Lane High School, the school where he once taught, was subject to a class action lawsuit by parents who complained Lane used bureaucratic transfer codes to hide purposeful student discharges.
A 2003 New York Times article said this about the problem:
According to the data received in the course of the lawsuit by Advocates for Children, an advocacy group that helps students who have been pushed out gain reinstatement, Lane has recently discharged some 1,400 students a year, under one of several dozen codes that are supposed to show where they are going.

About 300 a year leave the city, a Code 11 discharge. But by far the largest category — involving about 500 students a year — is Code 89, for discharges to most alternative high schools. There is no follow-up as to whether the students attend these schools.

The number of pushed-out students eventually rose to 5,000.
A former student from Lane said ”[t]he teachers were rude…[t]he teachers don’t care, nobody does. So why should we?”
This wasn’t a problem at one school, but the district overall. Schools Chancellor Joel Klein said this about the mess he inherited: “The problem of what’s happening to the students [being pushed out] is a tragedy … It’s not just a few instances, it’s a real issue.”
I’ve searched, but I couldn’t find Singer on record for closing that school. Even so, I want to take him up on his offer. If school reformers are willing to take one for the team by closing Success Academy based upon his criteria, I suggest, in the name of ending the war on children, that we apply the very same criteria to traditional public schools in every urban district across the country.
Warning: that might leave quite a few kids without a school district. We’ll likely need to open some charter schools to serve them.
Submit a Letter to the Editor
February 18, 2016

Farrell: How to Respond to a Title IX Complaint — What Every District and Coordinator Should Know