Stafford-Brizard: Teachers and Researchers Have Deep but Distinct Expertise. By Bringing Them Together, We Can Transform Education 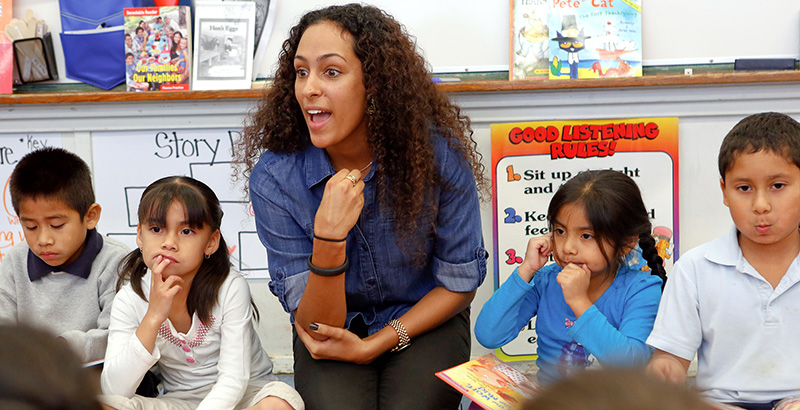 Last month, the Chan Zuckerberg Initiative launched a program designed to bridge the gap between research and practice in education. Through a request for applications, we are inviting teams of educators, researchers and organizations to submit proposals focused on supporting educators to strengthen, measure and codify practices in their schools using the science of human learning and adolescent development.

This initiative is rooted in the idea that unlocking the power of advanced educational research depends on not only sharing with, but learning from, educators. And it stems from the knowledge that building tighter, bi-directional connections between research and practice can have a transformational impact on a field.

It is easy to find examples of this kind of impact in disciplines like medicine and health care. In the mid-1980s, for instance, biologist D.P. Davies found that Sudden Infant Death Syndrome (SIDS) was rare in Hong Kong, where parents tended to place babies on their backs to sleep. In the United States, where parenting books commonly instructed parents to place newborns on their stomachs, thousands of infants died from SIDS each year. Forty years earlier, a New York pathologist had argued that this practice might contribute to the prevalence of SIDS. But his warnings were largely ignored.

In the years that followed the publication of Davies’s study, he and many other scientists helped create a body of research that finally challenged conventional wisdom: Sleeping on the stomach actually posed a far greater risk of SIDS. A decade later, the National Institute of Child Health and Human Development launched the “Back to Sleep” campaign to inform the American public about the importance of back sleeping. By translating research to the masses, “Back to Sleep” helped reduce the number of SIDS deaths in the United States by more than 50 percent.

The campaign is now regarded as one of the most successful efforts of its kind. Imagine, however, if such an ad campaign had never existed. Or that the observations of Davies and other scientists had never informed a broader community of research. What if advances that could save or improve the lives of many were reported only in journals, never to make their way into practice? And what if the voices and perspectives of practitioners were never heard? Sadly, this kind of what-if scenario is playing out every day in education, where research has been slow to reach those who are ready and willing to modify and hone their craft.

Over the past decade, our ability to conduct rigorous education-related social science research has evolved. What previously seemed impossible to measure is, indeed, measurable, understandable and worth applying to the varied contexts of schools and classrooms. Researchers now know, for example, that adolescents develop a stronger capacity for strategic problem-solving, deductive reasoning and information processing, due in part to their ability to reason about ideas that may be abstract or untrue; however, building these skills requires opportunities for practice. They have learned that the flexibility of the frontal cortical network may be greater in adolescence than in adulthood and that such flexibility may result in an improved ability to navigate the increasingly complex challenges that are part of adolescents’ social worlds. They know that adolescents’ growing competencies in flexible problem-solving, their awareness of others and their openness to exploration make this a particularly opportune time for agency and leadership to flourish.

But these and other advances in education aren’t reaching educators who have few opportunities for the sort of collaboration and professional learning that often occurs in medicine or other fields. This challenge is compounded by structural barriers — from seat time to bell schedules — that hamper teachers’ efforts to reimagine and redesign classrooms, particularly for adolescents in middle and high school. It is diminished by the infrequent opportunity for educators to inform research design and methodology with their experience and expertise.

The failure is not just in translating research into practice, but also in capitalizing on the wisdom of teachers to inform research agendas and priorities. Education’s gap between research and practice cuts both ways: The experiences and insights of professional educators rarely find their way into academic journals or receive the sort of scholarly attention that enables research to validate effective practices.

What if we flipped the paradigm on its head and began harnessing the insights and perspectives of practitioners? What if the field — which receives just 0.2 percent of federal spending — pioneered a more inclusive approach to research, in which academics and practitioners worked hand in hand to test assumptions at scale and identify practices with the potential to address our most vexing challenges?

This initiative and request for applications builds on CZI’s earlier support for research by the National Academy of Sciences and the Applied Developmental Science journal on the impact of relationships on learning and development and on how children learn and develop.

And it reflects our belief that bi-directional connections between research and practice are critical to ensuring that educators are equipped with the research-based tools and practices they need. Only then can we help all students achieve their full potential.

Analysis: How Are Families Navigating COVID-19? This Week-By-Week Survey of 500 Parents Has Some Answers

Analysis: What Can We Learn From Districts That Responded Early to the Coronavirus Pandemics? Here Are 5 Takeaways