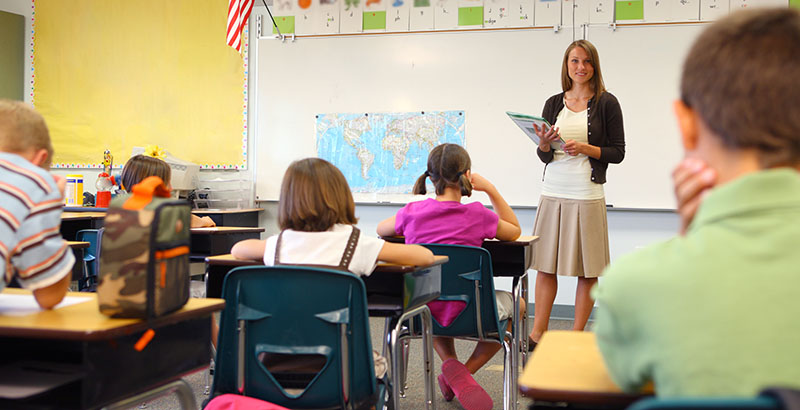 Faced with a grim economy and uncertainty about what school might look like in the fall, several district officials say they are pausing or dramatically scaling back their hiring of new teachers for the upcoming school year.

“We will definitely slow down hiring and limit it to essential positions,” says Kim Holland, the director of recruitment and retention for Spokane Public Schools in Washington. The 31,000-student district typically hires between 125 and 175 teachers, she said. The school board has declared a financial emergency and is considering layoffs.

About 100,000 teachers are hired in the U.S. every year, says Dan Goldhaber, a director of the Center for Education Data and Research at the University of Washington. “That varies a lot depending on economic conditions,” he adds.

And it is those conditions that are giving school officials pause just as the hiring process typically heats up. The uncertain economy could wreak havoc with municipal and state budgets, some budget deliberations are being delayed, and even the number of teacher retirements is hard to predict. Throw in the prospect of returning to school with a radically different setup to protect students and staff from a COVID-19 relapse, and it is no wonder school officials are skittish.

The Council of the Great City Schools asked Congress for at least $175 billion in new funds to stave off possible layoffs. Revenue cuts of up to 25 percent could translate to 275,000 teacher layoffs just in big-city public school systems, the group said in an April 28 letter.

Across the country from Spokane, the situation in Portland, Maine, is typical. The district, with 6,750 students, normally hires 40 to 50 teachers a year with a budget that usually increases up to 5 percent annually. The district gets 80 percent of its $117 million budget from municipalities, but Barbara Stoddard, the district’s executive director of human resources, says this year’s expected 3 percent increase may shrink to zero, causing the district to face a $5 million gap.

Due to the uncertainty, the district has held off advertising for new teachers.

While many districts are pausing hiring, there are outliers. Despite the uncertainty, the nation’s second-biggest district, the Los Angeles Unified School District, is proceeding as usual, planning to add 2,000 new certified staff, which includes teachers, school psychologists, nurses and other positions.

Los Angeles receives about 90 percent of its $14.3 billion budget from the state, and in a normal year, that figure isn’t set until late June. But each year the district must declare if it is making any significant staffing changes by March 15, said Superintendent Austin Beutner. “We do not anticipate significant reductions in the coming school year,” he said during an April 20 address.

The Washington Post reports that D.C. Public Schools has 450 openings and will rely, in part, on virtual job fairs to help hire needed teachers.

The last big factor officials have to consider is just what school will look like in the fall. Right now, plans range from continuing online education to starting school normally. But in between those extremes are a range of ideas, most configured around respecting some sort of social distancing. Students could, for example, attend school in shifts, either on the same day or on alternating days.

Pennsylvania Secretary of Education Pedro Rivera predicted that school will look different in the fall, as officials rethink everything from transportation to school cafeterias to students wearing masks. During a virtual town hall meeting on Fox News, President Trump suggested that while he favors school returning to normal in the fall, it is possible that older or immunocompromised teachers may have to wait to resume teaching in person. Los Angeles Superintendent Beutner reiterated that the school year would begin on Aug. 18 as planned, but he didn’t say whether school buildings would reopen or virtual learning would continue.

In a sign that reopening won’t be simple, Georgia’s Gwinnett County Public Schools originally wanted teachers to return May 18 to teach virtually for three days while at the same time working to close their classrooms for the year. But after the plan was announced and district-level administrators returned to their offices, teachers expressed concerns, and officials agreed to drop the three-day requirement.

The idea of hiring more teachers to allow students to socially distance themselves in the fall, like Denmark did this month, “was not a conversation we’ve had,” says Holland of Spokane. Denmark is allowing only 10 students per classroom, one-third of Spokane’s typical class. “To staff that would be expensive,” she adds.

Although a nationwide teacher shortage has worsened since 2012, districts from Spokane to Portland say they typically have enough candidates to fill most jobs. “We could have 40 to 70 candidates for an elementary job,” Stoddard says. Hard-to-fill positions include special education and high school spots for STEM and language teachers, she adds.

Any hiring that does happen will force districts to alter their normal, face-to-face practices. In Los Angeles, and even in districts cutting back on hiring, interviews and sample lessons have moved online. Los Angeles officials say they have already conducted about 500 teacher interviews online. (The district, with about 24,000 teachers, hires year-round.)

The district typically requires teacher candidates to perform a sample lesson before their application is rated and sent to school principals for a final decision. During the pandemic, applicants are supplying video lessons, says Bryan Johnson, director of certified workforce management.

Another factor that will determine the number of teachers to be hired this fall is how many current teachers will retire. As in many districts, teachers “often wait until the last minute” to declare their retirement, says Ileana Dávalos, chief human resources officer in Los Angeles.

At the Highline Public Schools, just south of Seattle, Superintendent Susan Enfield says she is planning to reduce her workforce by 24 positions this fall, moving current full-time teachers into the district’s substitute pool. She hopes resignations later this spring could help balance the projected moves. “The state budget forecast is pretty grim,” she says.

While some officials guess that a recession will dissuade teachers from retiring, Holland says the swift move to online learning may be pushing other teachers to retire prematurely. Although Spokane hasn’t seen a significant increase in retirements, she notes, some teachers are accelerating their plans to retire “as we’ve made the shift to online learning.”

On the candidate side, some graduates-to-be had their student teaching stints cut short while others were prevented from taking needed certification tests.

UConn’s Traynor says the state has offered to give graduates interim certification if they aren’t able to complete the typical requirements. But it gets complicated for the university’s 174 graduates when they seek jobs outside of Connecticut because every state has its own rules, she adds.

Enfield muses that all this upheaval may ultimately lead to transforming how districts teach students. One teacher in her district was performing poorly during the year, but when instruction moved online, she became one of her school’s strongest instructors, the superintendent says. “We need to look at where [teachers] are strongest. We’re not talking about that yet. These decisions have to be collectively bargained. They are third-rail issues.”

She adds one final thought to all the uncertainty. Whenever teachers return to school, she predicts they will be “devastated when they see how much learning students have lost over the last few months. They’ll be heartsick, and we won’t have the resources [to address those concerns] in the way it needs to be done.”