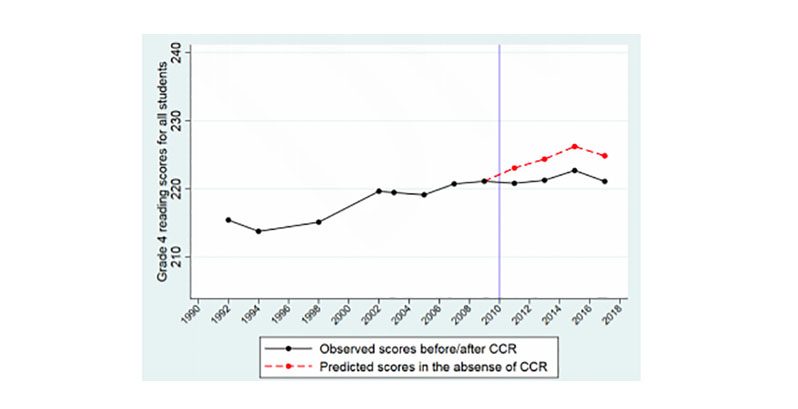 The Common Core State Standards have been, and continue to be, one of the most divisive topics in the recent history of American public education.

After the Common Core was released in 2010, it became the dominant form of college- and career-ready standards; 46 states and Washington, D.C., adopted it and worked to align their curriculum and instruction to this set of internationally benchmarked expectations. Almost immediately, vigorous political and policy debates arose, including questions about the appropriate role of the federal government and private philanthropy in public schools.

Almost a decade later, most studies of the Common Core have focused on issues such as implementation, curriculum and textbook alignment, and public perceptions. One question that has yet to be answered: Have college- and career-ready standards — for most states, the Common Core — led to improved student achievement, both overall and for key student subgroups?

In April, my colleagues and I released a study that tried to answer that question, and we were surprised by the results. Going into the study, we certainly expected to discover some positive impacts — at least small ones. But that is not what we found.

The American Institutes for Research conducted the study for a federally funded research center, the Center on Standards, Alignment, Instruction, and Learning, which was established in 2015 to serve as an objective resource on the implementation and impact of college- and career-ready standards.

Our primary measures for student achievement were state-level test scores from the National Assessment of Educational Progress (NAEP) in reading and math, administered to a representative sample of students in each U.S. state and the District of Columbia in select years. NAEP provides a common set of measures across states and years, and it has been found to be fairly well aligned with college- and career-ready standards.

As an alternative way to construct the two groups, we relied on a measure of the similarity between each state’s 2009 math standards and the Common Core. We defined the “treatment states” as those whose prior standards were least like Common Core and “comparison states” as those whose prior standards were most like them. (You can find the full description of our study design in our working paper, Effects of States’ Implementation of College- and Career-Ready Standards on Student Achievement.)

Our study revealed that the adoption of the new college- and career-ready standards had significant negative effects in grade 4 reading. Specifically, our analysis suggests that had the “treatment” states stuck with their prior standards, their grade 4 NAEP reading scores would have been 2.3 to 3.8 points higher on the 0-500 NAEP scale during the seven years after the adoption of the new standards. We also found a significant negative seven-year impact on grade 8 mathematics. While most of our results were statistically non-significant, they tended to be in the negative direction.

When we examined NAEP scores by key student subgroups, we found larger and more significant negative effects for certain subgroups, particularly students with disabilities, English learners and Hispanic students, than we saw overall.

It’s important to note that most of the negative effects observed in our study were very small, but they were fairly consistent.

Although these results are surprising, we caution against jumping to conclusions based on a single study.

First of all, our study does have limitations. In particular, given the timing of implementation across states, states in both the “treatment group” and the “comparison group” adopted the new standards in the same year, thus there isn’t really a “no-treatment” group with which the treatment group could be compared. Further, while NAEP is fairly well-aligned with college- and career-ready standards, the alignment is by no means perfect.

It’s also important to recognize that there are factors, other than the standards themselves, that may have influenced student outcomes. While the states included in our analyses adopted the new standards in 2010, it typically took three to five years to reach what states called full implementation. This means the new standards were not yet fully in place in some states when the NAEP was taken in 2011, 2013 and even 2015. Also, some states subsequently changed their standards after the initial adoption, and some states, districts and schools faced significant challenges in implementing the standards, such as finding well-aligned curricular materials.

We hope the findings from our study will contribute to a growing body of evidence on the impact of college- and career-ready standards and local and national efforts to improve education for all students.

Mengli Song is a principal researcher at the American Institutes for Research who specializes in research design, advanced quantitative methods and evaluations of education programs and policies. She co-authored “Effects of States’ Implementation of College- and Career-Ready Standards on Student Achievement” with Rui Yang and Michael Garet of AIR.

Mengli Song is a principal researcher at the American Institutes for Research who specializes in research design, advanced quantitative methods and evaluations of education programs and policies. She co-authored “Effects of States’ Implementation of College- and Career-Ready Standards on Student Achievement” with Rui Yang and Michael Garet of AIR.