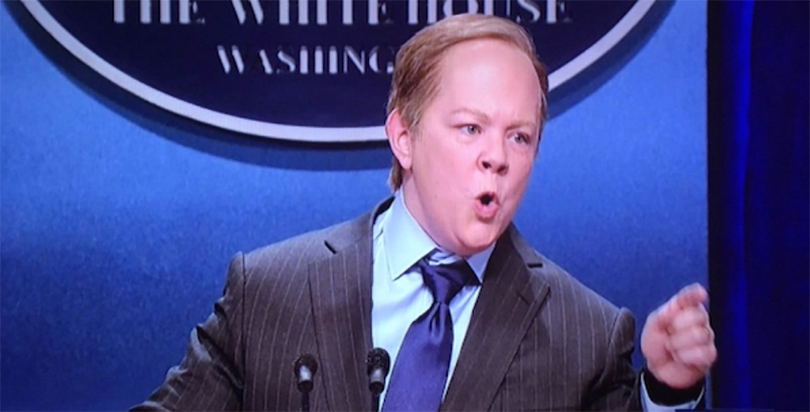 It’s not every day that a joke on Saturday Night Live revolves around a secretary of education. Much less a nominatined secretary — or the inner workings of education policy.

But then again, nothing about the first month of the Trump administration — or the nomination of Betsy DeVos — has been business as usual.

So perhaps we should have anticipated the startling DeVos cameo on SNL last night. And the moment when education research suddenly served as the setup for one of the night’s bigger punchlines: “How do you value growth versus proficiency in measuring progress in students?”

The SNL writers may have simply been parroting the exact language used at the Senate confirmation hearing last month, quoting the heated exchange between DeVos and Senator Al Franken that subsequently went viral on social media. But in doing so, they may have also made their viewers just a little more knowledgeable about how their child’s school works.

(Learn more about how your school system works: Sign up for The 74 Newsletter.)

Growth vs. proficiency is a key concept in the world of education research. And in a hugely popular growth-vs.-proficiency analysis published just a few hours after the Franken-DeVos exchange, The 74’s Matt Barnum explained why the difference matters:

“A 2008 survey of education researchers found that more than two in three said that value-added metrics — which examine how much students grow from year to year — are a good way to measure school quality. Just 9 percent said that ‘raw test scores’ — proficiency — made sense for evaluating schools.

“Why are researchers, at least in this survey, so in favor of growth measures? Perhaps the most basic reason is that there are many factors that affect what level a student achieves at and whether they hit the bar set at proficiency. Careful research finds that about 20 percent, and perhaps less, of the variation in student achievement is explained by differences in schools. That pales in comparison to out-of-school factors, like poverty, that have a significant effect on learning. Schools matter, but they aren’t the sole or even main driver of student outcomes.

“What that means for proficiency is that schools that take disadvantaged students — those in poverty, those who come in at low achievement levels — will look much worse. The school could be doing a great job helping kids improve, but if they start out at a very low level, that might not show up on proficiency measures.

“Put simply, proficiency rewards schools for the students they take in, but not necessarily for how they teach students once they’re there. Proficiency is also problematic not just because it is a score at one point in time — referred to as ‘status’ by researchers — but because it sets an all-or-nothing bar for students to reach. That means it doesn’t matter if a student just missed proficiency or scores way below it.

“Franken argues, ‘With proficiency, teachers ignore the kids at the top who are not going to fall below proficiency, and they ignore the kid at the bottom who they know will never get to proficiency.’ Indeed, there is research suggesting this phenomenon — sometimes called ‘educational triage’ — is real, though other studies do not find evidence of it. The extent of such triage likely varies from place to place, but the incentives for it inevitably exist when proficiency is used.

“That said, growth measures, particularly for individual teachers, remain controversial. They rely exclusively on test scores, which are limited gauges of school effectiveness, and which usually can’t be created in earlier or later grades. Schools are also not fully in control of how much students improve over time, and such scores for schools and teachers also tend to bounce around from year to year. However, there is evidence that value-added measures are a reasonably accurate gauge of schools’ influence and are predictive of long-run student outcomes…”

Sign Up for The 74 Newsletter
Submit a Letter to the Editor
February 5, 2017