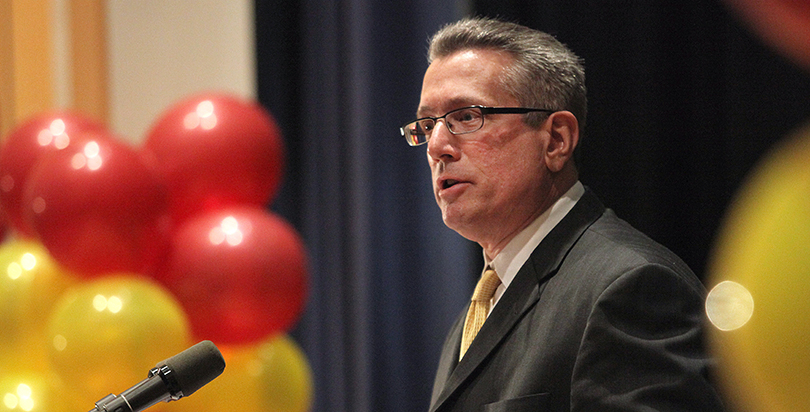 Steve Jobs said, “You can’t connect the dots looking forward; you can only connect them looking backwards.” In that vein, it makes sense that my first conversation with Mitchell Chester was about assessments.
It was 2000. He was the assessment and accountability director in Philadelphia, and I was a young policy analyst at Achieve, after four years as a high school teacher. Achieve had been floating a crazy idea to build common state expectations coupled with a common test that could simultaneously signal the extent to which students were ready for high school math and allow for comparisons across states and drive improvements at the system level.
Mitch was skeptical but open-minded. He asked what seemed like an endless stream of probing questions — for example, about the theory of action (what did we hope to accomplish that NAEP wasn’t already?), the technicalities (what would it take for results to be comparable?), and the political realities (why would any state want to open itself up to scrutiny?). We sat by a panoramic window in Snowbird, Utah, at that year’s national conference on student assessment, in deep discussion. My answers to his questions did not seem to impress him much (although the idea grew on him later), but he made an impression on me, in part because he asked so many questions and in part because he was actually interested in my answers.
I would come to learn that this was classic Mitchell: He asked a lot of questions! Sometimes those questions were to glean information, but just as often they were to make a point, or to make a joke, or — and he was particularly good at this one — to coax a more preferable answer than the one he had just received. His questioning was a powerful teaching tactic and a way to get people to expand their thinking. Apparently, he thought I had a lot to learn, given how many questions he asked me over the course of the past 17 years.
Mitchell was the Johnny Appleseed of education policy. Wherever Mitchell went, ideas sprang up — in some cases his own, and in other cases the ideas of others that he helped improve, nurture, and grow. Consider the major policy initiatives of the past 15 years: international benchmarking so the U.S. could learn from high-achieving nations; college and career readiness as the driving purpose of state education systems; common standards that set a high bar to ensure all students have access to rich curriculum, regardless of their ZIP code; and common assessments to allow cross-state comparisons, reduce costs, and ensure transparency and fairness.
Mitchell was a leader in each of these reform efforts.
In 2010, as Massachusetts education commissioner, Mitchell — along with fellow chief state school officers Paul Pastorek of Louisiana and Eric Smith of Florida, as well as Gene Wilhoit of the Council of Chief State School Officers and Mike Cohen of Achieve — brokered a multi-state agreement on a set of principles that became the foundations of the Partnership for Assessment of Readiness for College and Careers (PARCC), one of two state assessment consortia. The goal: to build the highest-quality assessment in the country that would reflect and support quality instruction — while serving the policy priorities noted above.
Mitchell was unanimously selected to be chair of the PARCC Governing Board, a role that perfectly suited his combination of assessment wonkiness, policy chops, political sensibilities, and people skills. From September 2010 to September 2015, he chaired 24 in-person board meetings (and countless phone calls), during which he led the who’s who of the nation’s most ambitious state chiefs to make decisions on every aspect of PARCC test design and implementation, from item type to test length to establishing performance levels that were ambitious but fair.
He began every meeting with a joke (usually about the food, or lack thereof — or his beloved UConn Huskies) and sprinkled his groan-worthy but hilarious puns throughout the day. He moved policy decisions deftly by asking provocative questions and allowing time for deliberation. He always knew exactly where he wanted the discussion to go but understood the art of letting ideas percolate. He understood the importance of engaging diverse viewpoints, including those from higher education leaders from across the states, in order to build a broader coalition of the willing. Most important, he steadfastly reminded people around the table that decisions would impact children, teachers, and schools. This was authentic — not just punditry — and spoke volumes about what drove him as an educator and a person. When it comes down to it, Mitchell’s moral and intellectual leadership of the PARCC consortium from its inception was hands-down its biggest asset.
It was Mitchell who asked me to step into the PARCC leadership role and launch Parcc Inc. to give the consortium a “home.” He acknowledged that it would be challenging to wrangle so many independent-minded chiefs (he was right); he said it would get political and potentially hard (that was an understatement); and he let me know that it would be a career-changing move for me (for better or for worse). But the most important thing he said was that he knew I was ready — and that he would support me. And he did, unfailingly.
During his tenure as PARCC chair, Mitchell and I spoke weekly. Frequently, he was in his car, on his way to or from a school visit, which he did regularly and loved. Inevitably, he peppered me with questions, just as he did in our first meeting so long ago, pushing me to think deeply, consider different perspectives, seek alternatives, see connections, anticipate consequences — and always to think about what was best for students, teachers, and the systems that support them.
These questions — and the ensuing conversations — made me better. Mitchell made me better. He made PARCC better. He made us all better.
Submit a Letter to the Editor
June 29, 2017