Silver & Polikoff: Getting Testy about Testing — K-12 Parents Support Canceling Standardized Testing this Spring. That Might Not Be a Good Idea

In the before-times, one of the hallmarks of spring for parents, students and teachers was the ramp-up toward federally mandated standardized tests. COVID-19 had something to say about that last school year, and in mid-March, the U.S. Department of Education granted states a blanket exemption from standardized testing. With students learning from home and no return to school in sight, it took less than two weeks for all 50 states to take the federal government up on its offer.

With virtually no infrastructure for securely administering high-stakes tests remotely, the decision to cancel the spring standardized tests was relatively straightforward. What to do about standardized testing this coming spring, though, is anything but. New data from the Understanding America Study, administered by the USC Dornsife Center for Economic and Social Research to a nationally representative sample of 1,335 U.S. K-12 households, indicates that as of October, the proportion of families whose children attend school fully remotely has dropped to half. The other half attend fully in person (28 percent), partially in person (18 percent) or by some other mode (4 percent). With barriers to standardized testing decreasing, at least for half of students, the DeVos Department of Education has been less definitive about whether states will again be exempt from the federal standardized testing mandate. With a new administration in the White House, what to do about the upcoming round of standardized tests will be a key tone-setting decision for the new secretary of education.

At first blush, canceling 2021’s standardized tests seems like the humane thing to do at a time when teachers and students are already enduring historically stressful circumstances. However, some education leaders argue that data from these standardized tests are crucially important for ensuring that students get the supports they need. Given fears that COVID-fueled school closures are widening preexisting racial and socioeconomic opportunity gaps, it is clear that forgoing another year of the information these standardized tests provide carries a real cost.

For such a complex issue, one thing is surprisingly clear: Parents want the tests canceled. Since April, the study has been asking parents how favorably they would view cancellation of standardized testing for the 2020-21 school year, and the proportion who “support” or “strongly support” such a move has risen steadily from 43 percent in mid-April to 49 percent in late May to 59 percent in mid-July to 64 percent in mid-October. Even more striking than this overall support is the consistency across demographic subgroups: between 55 percent and 70 percent of parents — regardless of racial and ethnic group, socioeconomic and political lines, and method of attending school — support canceling standardized testing this spring. 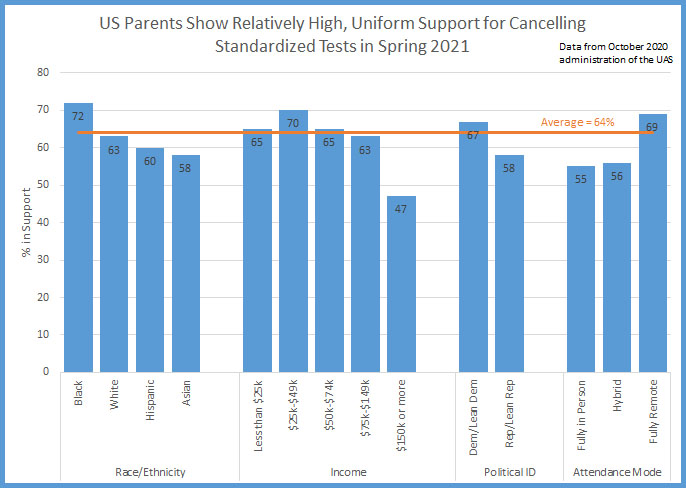 What explains this widespread support for canceling standardized tests? One plausible explanation is that families worry that their children will not do well on the exams. However, study data indicate that only 19 percent are currently concerned about the amount their child will learn this year. (This 19 percent does vary by attendance mode, though — 10 percent of parents whose children attend school fully in-person express this worry, compared with 20 percent of those whose children attend partially in-person and 24 percent of those whose children attend fully remotely.) If academic concerns do not fully explain support for test cancellation, perhaps parents want to shield their youngsters from the emotional toll commonly associated with high-stakes testing? This is slightly more plausible, with 27 percent of families currently concerned about their child’s psychological health, varying from 22 percent to 28 percent depending on school attendance mode. While these numbers are far from desirable, on their own they do not account for the 64 percent of families who want to cancel standardized tests this year.

More than any specific concern, it seems reasonable that the current wave of support stems partially from the growing push against standardized testing dating to before the pandemic and partially from plain, old exhaustion. Coming off a summer that was trying for just about everyone, parents may view standardized tests as yet another thing to worry about in a year that is already shaping up to be another doozy.

For a new secretary of education in an era as divided and combative as this, enacting a policy like test cancellation that enjoys almost two-thirds support is sure to be a tempting proposition. However, while parental exhaustion is of course legitimate and reasonable, it is likely that the average parent does not appreciate the full range of ways that data from these tests are used. Results from state exams this spring would represent some of the best insight to date into the educational effects of the COVID-19 pandemic, especially for students from historically underserved groups.

To the extent possible, then, states should strive to administer a round of standardized tests this spring, even if in abbreviated form, even if only to a representative subset of students and even if the data are used only for monitoring, not accountability (which could be an easier sell to a weary public). If states and the federal Department of Education do deem it feasible to carry out testing, the study data suggest they should be prepared for pushback from parents. They would be well-served to start making the case now that springtime standardized tests will end up producing more good than harm.

Disclosure: The authors gratefully acknowledge financial support for this research from the Bill & Melinda Gates Foundation, which also provides financial support to The 74. This material is also based upon work supported by the National Science Foundation under Grant No. 2037179. Any opinions, findings, and conclusions or recommendations expressed in this material are those of the author(s) and do not necessarily reflect the views of the National Science Foundation.

Morgan Polikoff, a FutureEd senior fellow, is an associate professor at USC's Rossier School of Education and author of the book Beyond Standards.