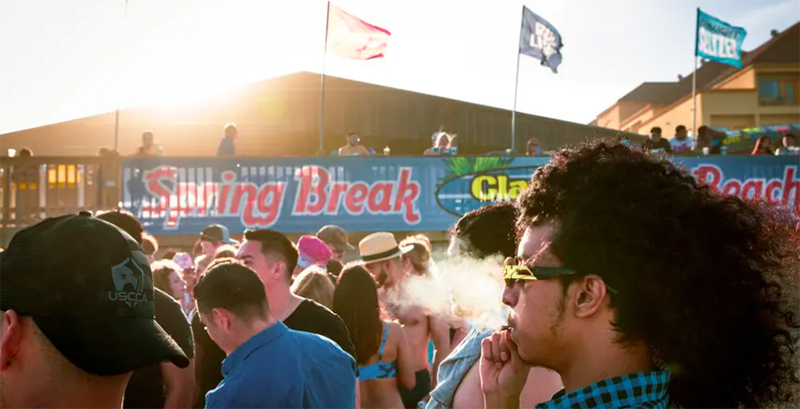 People gathered on the beach in front of Clayton's Beach Bar during spring break on South Padre Island on March 10. After Texas college towns initially emerged as coronavirus hot spots during the beginning of the fall semester, university officials are hoping the same won’t occur after the spring break period. (Jason Garza for The Texas Tribune)

As many Texas universities take the extraordinary step of canceling or significantly reducing spring break during the pandemic, some schools are hosting on-campus events and continuing the weeklong break in March despite concerns about college students using the time to travel and infect others.

In the early weeks of the pandemic in March 2020, colleges across the state extended spring break and then moved to online-only classes afterwards largely due to initial fears about facilitating the spread of the coronavirus. Now, a year later, college officials face a dilemma with what to prioritize during spring break: keep students from spreading the virus or provide them with a mental health break.

But spring break for many is now coinciding with Gov. Greg Abbott rescinding a statewide mask mandate and allowing businesses in the state to open up 100%. After Texas college towns initially emerged as coronavirus hot spots during the beginning of the fall semester, university officials are hoping the same won’t occur after the spring break period

Multiple universities, including Texas A&M University and Texas Tech University, have decided giving students the opportunity to party during a sustained break in March is too risky. Instead, they are opting to have days off throughout the semester to provide a break without the chance for a weeklong vacation.

Texas Christian University in Fort Worth gave students three days off — Tuesday through Thursday — last week and hosted in-person activities like an outdoor pool party, live music performances and a petting zoo as a way to discourage students from traveling. Many other schools, including the University of Houston and the University of Texas at Austin, opted for weeklong spring breaks this week.

Health officials and university officials previously warned about cases spiking during holiday breaks for Thanksgiving and the winter season, where many college students traveled home to be with their families. Campus leaders and epidemiologists are now worried that students may contract and spread COVID-19 during spring break if they travel or gather in large groups.

While many campuses said they didn’t record an increase in COVID-19 cases after spring break in their community last year because most students didn’t return to campus, UT-Austin was an exception. Last year, after UT-Austin students took a trip to Cabo San Lucas, Mexico during spring break, 60 travelers tested positive for COVID-19.

Diana Cervantes, assistant professor at the University of North Texas Health Science Center, said spring break won’t cause as much of an increase in statewide coronavirus cases compared to the winter holidays because there isn’t as much travel universally. However, she said she is concerned about COVID-19 spread among young adults who engage in high-risk activities.

“With spring break, the biggest high risks are going to be people who are young adults,” Cervantes said. “College kids have been ‘Zooming,’ and they’ve been having online classes. And they get to the point where they’re just like, “Hey, it would be great to get out and do other things and take a break.’ And that’s the biggest concern.”

UH spokesperson Shawn Lindsey said in a statement that having a break is healthy for students during a challenging semester, but the university is discouraging travel during the break.

“There has been no compelling reason for the University to make a change to the calendar with regard to spring break,” Lindsey said in a statement. “Our cases remain relatively low. Our contact tracers have found no cases of transmissions within classrooms, nor have we had any large outbreaks in our facilities.”

Brett Stawar, president and CEO of the Port Aransas Tourism Bureau, said he doesn’t expect most college students to wear masks on their vacations there. He said some unmasked young adults will go to bars at full capacity late at night, but many will be gathering on the beaches or non-enclosed spaces, where experts say there is less risk of spreading the coronavirus.

“I think spring breakers are going to come down and enjoy themselves. They’re young adults and will probably want their freedoms,” Stawar said. “Some of the bars and scenes will be more crowded if they have dance floors. … We’re going to have later gathering times for patrons and certainly that would mean more risk of exposure.”

Tourism and city officials in popular vacation areas in the state, such as South Padre Island, said few students have visited so far, and they are primarily expecting to see families on vacation — not students. Many Texas students are taking their break in other states like Florida or international locations like Cancún or Cabo San Lucas, officials said.

Destiny Neal, a junior at TCU, said having a break in the springtime is important for her mental health and the well-being of other students. But she worried other students would still travel even though they did not have Monday and Friday off.

“I think it’s a good strategy to use with what we have, but I’m still concerned that people won’t be as responsible,” she said. “And I wish we had the full break just to actually get a break.”

If students travel, UT-Austin is recommending that they should get tested for COVID-19 one to three days before their trip and avoid travel if they test positive. When students return, the university is encouraging students to get tested three to five days afterwards and self-quarantine for seven days. If they don’t get tested, they’re encouraged to self-quarantine for 10 days when they get back.

“We encourage you to make good decisions during spring break, just as you did during winter break, and follow the university’s public health guidance: wWear a mask (double up!), avoid gatherings (especially indoors) and try to limit your contacts,” Soncia Reagins-Lilly, UT-Austin’s vice president for student affairs and dean of students, said in an email to students.

Joe Pettibon, vice president for enrollment and academic services in the provost’s office at Texas A&M, said the school canceled the weeklong spring break due to concerns about people traveling and gathering in large groups.

“Any time there’s been a time where people have had time to gather in larger groups or with people that they’re not normally around, that has increased the spread of the virus, so that raised concerns about spring break,” Pettibon said.

Instead, Texas A&M shortened spring break to one day and gave the community a day off on a Tuesday in March and a Friday in April to help their mental health.

Texas Tech University president Lawrence Schovanec said the university shortened spring break to one day because travel could jeopardize the safety of the campus community. The university also provided students with a day off on a Friday in February and a Monday in April to help their mental health.

“When we made that change (to spring break), several students wrote to me unhappy about that change, saying they had planned to travel and this disrupted their plans,” Schovanec said. “In some cases, they have very legitimate reasons — they wanted to go see their family. Others, however, mentioned their plans either to go skiing or to beaches.”

Keandra Hunt, a junior at Texas Tech, said she appreciates the wellness days, but they aren’t much of a break because she will be using that time to catch up on assignments. She said she disagrees with using concerns about people traveling to justify canceling spring break, because people will still use those days to travel.

“If you’re having these three-day weekends once a month, then that gives students the opportunity to travel because students will travel regardless,” Hunt said. “Students … can go out and then come back and get COVID. If we just had a normal spring break period, there might be an influx of COVID cases all at once versus this influx once a month.”

Megan Menchaca is a reporting fellow at The Texas Tribune, the only member-supported, digital-first, nonpartisan media organization that informs Texans about public policy, politics, government and statewide issues. | Disclosure: Texas Christian University, Texas Tech University, University of Texas at Austin, University of Houston and University of North Texas have been financial supporters of The Texas Tribune, a nonprofit, nonpartisan news organization that is funded in part by donations from members, foundations and corporate sponsors. Financial supporters play no role in the Tribune’s journalism. Find a complete list of them here.

Megan Menchaca is a senior at the University of Texas at Austin and a returning reporting fellow at The Texas Tribune, the only member-supported, digital-first, nonpartisan media organization that informs Texans about public policy, politics, government and statewide issues.