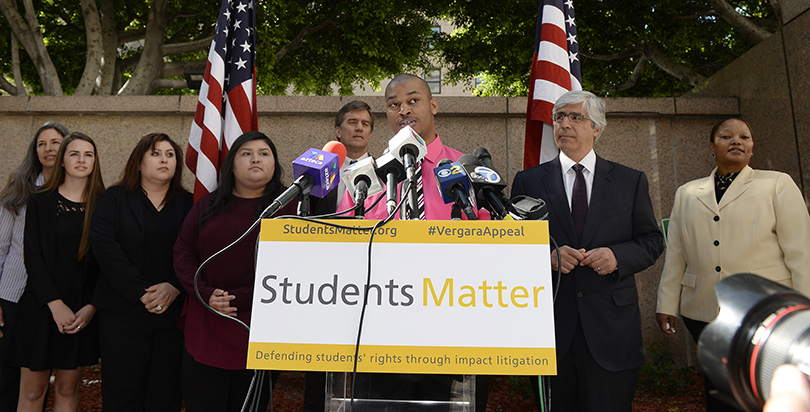 This article was produced in partnership with LA School Report.
The day after California’s Court of Appeals ruled that the job protections for teachers do not predominantly harm minority students, the key players in the case said they feel confident the California Supreme Court will take up the issue.
On Thursday, the three-judge panel reversed a landmark Vergara vs. California ruling by Superior Judge Rolf Treu, who in 2014 struck down five of the state’s tenure laws. The case is being watched nationwide and has sparked similar lawsuits in other states, including a Minnesota challenge to the state’s teacher tenure laws that was initiated just last Wednesday. (Read more about the Minnesota arguments)
The appeals court heard arguments and asked questions on Feb. 25 in downtown Los Angeles and had until the end of May to issue a ruling.
In a decision that arrived weeks earlier than expected, the judges wrote: “We reverse the trial court’s decision. Plaintiffs failed to establish that the challenged statutes violate equal protection, primarily because they did not show that the statutes inevitably cause a certain group of students to receive an education inferior to the education received by other students.
“Although the statutes may lead to the hiring and retention of more ineffective teachers than a hypothetical alternative system would, the statutes do not address the assignment of teachers; instead, administrators—not the statutes—ultimately determine where teachers within a district are assigned to teach.”
The judges said it was not shown that any certain group was more likely to be taught by ineffective teachers than any other group of students. “With no proper showing of a constitutional violation, the court is without power to strike down the challenged statutes. The court’s job is merely to determine whether the statutes are constitutional, not if they are ‘a good idea.’”
Raw Audio: Plaintiffs argue their case to the Court of Appeal

The day after the ruling, one of the nine students who filed the California lawsuit, Raylene Monterroza, now 18, expressed her disappointment in a conference call. “We deserve better. All of us, in every school, in every grade, in every ZIP code, so even with this decision, we will keep fighting.”
Theodore J. Boutrous Jr., attorney for the students, said Friday that the appeals court decision is “divorced from reality.” He said in the call, “We took a hit but have dusted ourselves off and are ready to fight the next round for the students who have been our inspiration from Day One.”
He is ready to appeal to the California Supreme Court and added, “We feel very good about our path going forward.”
‘The California Supreme Court can stand as a leader to the nation’
Los Angeles Unified School District Board President Steve Zimmer, who was on a jet and traveling when the ruling was released, said in a statement late Thursday: “Today’s important court decision allows us to return with laser focus to the real question facing our public education system: how will we recruit, train and support a new generation of teachers who will give their lives to the ideal that the American dreams of every child can come true in the schools of our state and our nation.”
American Federation of Teachers President Randi Weingarten heralded the decision in the context of the state’s teacher shortage: “It is vitally important that every single child, particularly the kids who brought this case, receive a great public education. That starts with recruiting, retaining and supporting teachers, not blaming educators for societal problems or stripping away their voice.”
The director of Education Trust-West, Ryan J. Smith, said the decision was a setback for students of color and low-income students. He pointed out that in California, 1.5 million black and Latino students do not meet standards in math or English.
“The continuing debate over the Vergara case is a linchpin to continue the conversation about the need for real equity in education,” Smith said in a statement. “The case forces California to publicly confront the inequitable reality so many of our students face in schools across the state.”
However, National Education Association President Lily Eskelsen Garcia declared the decision a victory for students and called the case “political.” “Now we must return to working on real solutions to ensure all of our students succeed. Only when teachers, school boards and administrators work together can we ensure that there is a great public school for every student.”
Dave Welch, the founder of Students Matter that is supporting the students who filed the case, said, “We have set the expectation in California that students will inevitably get bad teachers. We simply expect students to go to school and for an entire year not learn.”
Ben Austin, the policy and advocacy director for Students Matter, said, “The political tectonic plates of public education have shifted as a result of Vergara and they aren’t shifting back.” He added, “The facts are plain as day. We can’t ignore the harm being done to our children and to our best and brightest teachers.”
Joshua Lipschitz, a lawyer in the Vergara case, told 74 partner LA School Report that the judges affirmed that there were severe problems in the laws governing teachers, but their decision was completely wrong. He said this gives the state Supreme Court “a good chance to make the right decisions and help students” and to “answer difficult questions in this battle over equal protection.”
The plaintiffs have until May 24 to file a petition for review, and then the state Supreme Court has 60 days to decide if they are going to take the case or extend the review period further. It could take six months to a year once they grant the review to actually hear their appeal.
The state’s high court would be the last stop, as the case would not go to the U.S. Supreme Court because it deals with state law, Lipschitz said.
“The California Supreme Court can stand as a leader to the nation, and we really, really, really believe they will take it,” Boutrous said.
Disclosure: The Minnesota lawsuit mentioned in this article is supported by the Partnership For Educational Justice, a nonprofit founded by 74 Editor-In-Chief Campbell Brown, and Students for Education Reform Minnesota. Both groups, as well as The 74, receive funding from the Walton Family Foundation.
Submit a Letter to the Editor
April 17, 2016