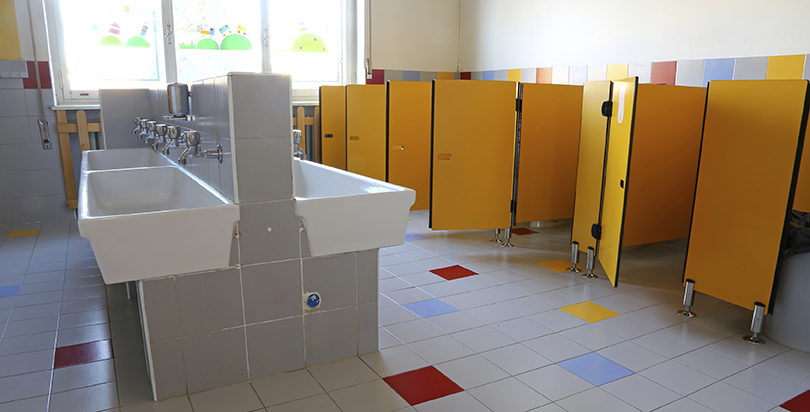 Updated March 1: South Dakota Gov. Dennis Daugaard vetoed legislation late Tuesday afternoon that would have created the first state law defining which bathrooms and locker rooms transgender students should be allowed to use. In making his decision, the governor said the bill did not address a pressing concern in South Dakota school districts and could spark lawsuits from civil rights activists.

“This bill would place every school district in the difficult position of following state law while knowing it openly invites federal litigation,” Daugaard said in his decision. He also cited local autonomy, noting that school districts are already capable of making restroom accommodations that serve the best interest of their students, “regardless of biological sex or gender identity.”

Background on South Dakota’s controversial legislation…
It’s decision time for Dennis Daugaard, the governor of South Dakota: Where should the state’s transgender students go to the bathroom?
The Republican governor is up against a hard Tuesday deadline to sign or veto a historic and highly controversial bill that will require students to use the school bathrooms and locker rooms that correspond to their gender at birth, as opposed to their gender identity. Students would be required to submit a request to school officials for a “reasonable accommodation” if they’re uncomfortable using facilities that correspond with their birth gender.
If the governor chooses not to act by end of day Tuesday, the legislation automatically becomes law.
“I have until Tuesday and I’ll get it done by Tuesday,” the Argus Leader reported Daugaard saying Thursday. “Certainly I want to do it as quickly as possible, but it’s more important to do it well.”
The bathroom rights of transgender people have been a contentious issue for years, and K-12 students have largely been at the center of the national debate. Save for a veto, South Dakota will become the first state with a law defining where transgender students are allowed to use the restroom. (Read The 74’s recent series: A new push to protect transgender students in school)
Rep. Fred Deutsch, the South Dakota Republican who originally introduced the legislation, told the New York Times he wrote the bill in order to “protect the innocence of children.” But Thomas Lewis, a high school senior in Sioux Falls, said the legislation “creates more stigma” around transgender issues. It also sends a foul message to transgender students, he said.
“You’re so different, in a bad way, that you need your own bathroom, your own locker room, your own shower situation,” Lewis said.
Ashley Joubert-Gaddis, the director of operations at the South Dakota advocacy group The Center for Equity, told USA Today the new bill is a reaction from legislators who are angry over last year’s U.S. Supreme Court ruling legalizing gay marriage in all 50 states.
Having previously said that he had never met a transgender person, Gov. Daugaard sat down with transgender rights advocates last week who said they hoped to persuade him to use his veto authority. The opportunity, the governor said, “helped me see things through their eyes a little bit and understand their perspective.”
Daugaard’s experiences with transgender people don’t differ much from most Americans. In fact, 76 percent of Americans say they do not personally know anybody who identifies as transgender, according to a June 2015 poll from the Huffington Post and YouGov. Additionally, those polled narrowly opposed rules that would allow transgender people to use public restrooms and locker rooms that correspond with their gender identities; 37% said transgender people should be allowed to use facilities that differ from their birth gender, while 38% said they should not be given access. Also revealing: One in four people surveyed said they weren’t sure.
(Related: One mother’s story of how school bullies and state laws changed the way she saw her transgender child)
Though South Dakota is the first to pass a bill defining transgender students’ bathroom access, they’re just one in a group of states considering similar rules. On the other side of the debate are 16 state legislatures — from Kansas to Pennsylvania — now considering bills to prevent discrimination based on both sexual orientation and gender identity. In 17 states, such laws already exist.
These new bills follow first-of-their-kind sanctions from the U.S. Department of Education, which reached a settlement last December with an Illinois school district over granting access to locker room facilities to a transgender student. In that case, the Education Department said the school district had violated Title IX, a federal law barring sex discrimination in education, when it denied the student, who identified as female, access to the girls’ locker room.
Submit a Letter to the Editor
February 29, 2016