Scores Show 850,000 High School Juniors Are Ready for College. Starting Early Could Save Them Time — and Money. New Report Asks: Why Make Them Wait? 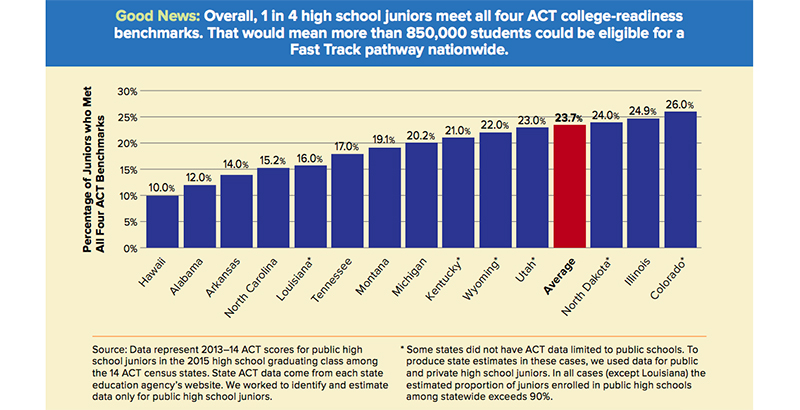 It isn’t news that some students are academically ready for college before high school graduation. But it might be a surprise to know that nearly 1 in 4 11th-graders meet this benchmark at the end of the school year, according to results from the ACT that measure college readiness.

Should those students head off to college without having a senior year? Yes and no, a new report from Education Reform Now and the Alliance for Excellent Education argues. The report makes the case that there should be better pathways for these nearly 850,000 students — one-third of whom come from low-income households — to begin college coursework but still remain in high school, if they choose, and possibly save time and tuition money.

“A lot of students don’t need the ‘12’ in ‘K-12,’” said Michael Dannenberg, co-author of the report. “We can create clearer, more affordable, more student-oriented pathways to and through college.” 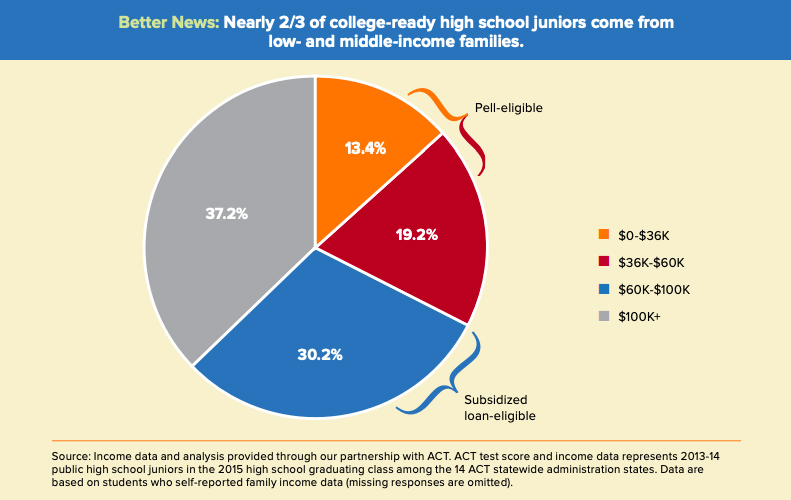 The paper outlines two general pathways that students could choose from. The primary one is completing senior year at their current high school but participating in an academic track that will earn them enough credit to complete their first year of college at a state school for free. The second path would let students graduate from high school early and head to a state college with a scholarship for that first year.

To do either of these requires a heavy policy lift, especially when it comes to transferring academic credits. Many students know the frustration of showing up to college having taken a handful of Advanced Placement classes or dual-credit courses earned at a college and finding that none of them count toward their degree. About 42 percent of AP exams taken each year earn marks below the passing score of 3, which is the cutoff at many colleges for accepting credit. Sometimes credits count only as electives rather than going toward the classes required for a major. Only half of states require that dual-enrollment credits transfer to all state schools, the report authors found.

For this program to work, each state would have to create rules requiring that public colleges accept certain dual-enrollment credits and certain passing scores on AP or International Baccalaureate classes.

High schools would also have to increase their access to these classes or programs. This is a big ask of smaller, rural schools that can’t afford to have teachers for every AP course, but the report’s authors recommend online dual-enrollment options for these schools.

These programs could save state schools money because they’re enrolling students for three rather than four years. Those funds could then be recycled into expanding college-credit opportunities for high schoolers, the report authors said, estimating that as much as $1.8 billion could be reinvested.

“We’ve created an artificial distinction between K-12 and postsecondary education as though they are two separate systems … and the defined point, age 18, is when you’re ready to move from one system to the next system, and it doesn’t work that way,” said report co-author Anne Hyslop.

Some states already require state colleges to accept dual-enrollment credits or let students know if the credits count only toward an elective. In 2016, 20 states required that AP exams count toward college credit, and some even dictated what score schools must accept. Currently, 25 states and Washington, D.C., require that dual-enrollment classes earn students credit both in high school and in college.

But as states consider expanding these advanced course offerings, they must also consider equity, the report authors wrote. At high schools that offer AP courses, only 29 percent of students enrolled in AP are black or Latino. In 2013, only 9 percent of AP test takers were black and only 4 percent of black students earned a passing score. Research shows that while AP programs are expanding, it’s still difficult to tell whether they equitably serve all students.

Thirty-four states have already tried the second pathway recommended in the report by creating options for students to graduate early and enroll in college. But only 1 to 2 percent of students have taken advantage of this opportunity. This could be because just six states offer scholarships, and in some, the grant is too low (it ranges from $1,000 to $7,500), or because students and parents don’t want to give up traditional high school experiences like homecoming or football games too soon. To make this option more palatable, the report recommends that higher-spending states offer a scholarship of at least $6,200 to match the size of a Pell Grant.

Although these policies are targeted toward the students who are ready for college, the report authors said they could have cascading positive effects for all students who are trying to enroll in or transfer to college and earn credits for classes they’ve taken in the past.

“The benefits of this extend beyond students who are fast-track eligible,” Hyslop said.

Even for students who are college-ready but have no plans to attend an in-state public school, the authors argue that this plan is still beneficial because it would expand rigorous course opportunities at the school.

“What we’re trying to do is create more options for families within the public system,” Dannenberg said.

Go Deeper: This is the latest article in The 74’s ongoing ‘Big Picture’ series, bringing American education into sharper focus through coverage of the latest data and research. Get new additions delivered straight to your inbox by signing up for The 74 Newsletter; here are a few notable recent dispatches: