Schooling, Reimagined: How Dacia Toll Shaped the Greenfield School By Borrowing From the Best

In any history of high-performing charter schools, Achievement First’s Dacia Toll qualifies as an early adopter of the networks model.

She was a law student at Yale, thinking hard about social justice, when she concluded that it all starts “downstream,” in school. So while still in law school, she started pursuing teaching credentials, carrying out her student teaching at Fair Haven Middle School in New Haven, Conn.

There she found seventh- and eighth-graders who were near-illiterate. Told to build a lesson around the book Johnny Tremain, Toll found the task impossible. How can you teach lessons from a book the kids can’t read? The answer from her mentor teacher: Well, then, show them the movie.

Such attitudes about poor kids — that an adequate education was impossible and thus needn’t be sought — prompted her to create the Achievement First network of schools, starting with New Haven’s landmark Amistad Academy. Today, Achievement First operates 30 successful schools in Connecticut, New York and Rhode Island.

So, it should surprise no one that Toll has once again become an early adopter in reinventing a charter model that was already working pretty well for poor kids. As with the leaders of other top charters, she realized that boosting academic achievement in K-12 wasn’t sufficient to carry poor students through college.

That challenge required a new kind of school.

Asked Toll: What would such a school look like if you started with a greenfield? A complete do-over? Answering that question took Toll and her team on an unusual journey. Essentially, she set up a skunkworks operation — independent research that operated separately from her other schools — and hired outside school design experts to do the work.

That work began with a limitless “blue sky” phase led by IDEO, an international design firm founded in Silicon Valley (think Apple’s first mouse). Overseeing all the design work was Aylon Samouha, someone I first met when he was chief of schools for Rocketship charters. Samouha, a former senior vice president for Teach for America (where he came across Rocketship), teamed up with Jeff Wetzler, who in the beginning of the project straddled his innovation work with Teach for America to join the greenfield experiment.

The team visited some of the best charter groups in the country and pulled something from each: From Summit came an emphasis on personalized learning plans that always focus on learning content. “In order to do project-based learning, the kind of stuff that Summit is doing, you need to actually have information in your working memory,” said Samouha. “You can’t just have the skill of being able to synthesize.”

From BASIS, the team absorbed more lessons about the need to master actual content: real facts that get absorbed. “There’s probably no other place I’ve visited that has such a commitment to content,” said Samouha. “Studies suggest that if you know something about baseball, you can read a text about baseball that’s two years ahead of your reading level.”

From California’s High Tech High, they took away lessons on how to do project-based learning. “Their culture is very student driven. They are in charge of the learning in a way that you really rarely find. We took some inspiration from that.” 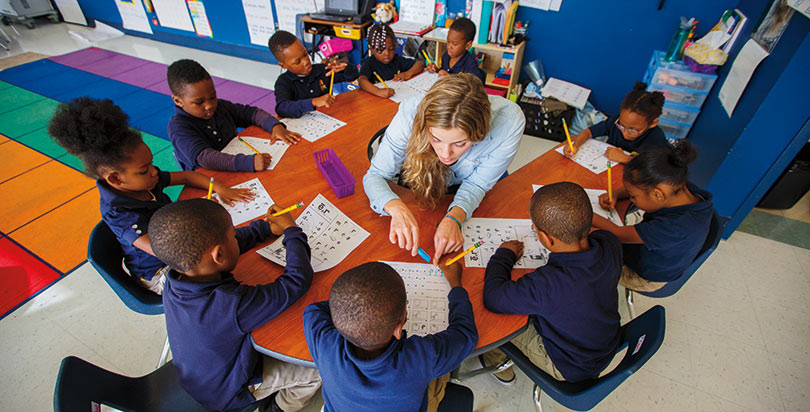 From a Montessori school in Austin, they absorbed lessons about playing the long game. “They were building the executive function of kids by allowing them to make their own choices.”

From the Brooke charters in Boston, they drew lessons about instilling a love of reading among the students, as well as some lessons about the limits of blended learning. Brooke, perhaps the most successful charter group in the country, shuns online learning.

From Rocketship, they drew lessons about parent involvement — and the promise of blended learning.

From KIPP founder Dave Levin, they borrowed lessons on how to build character, the “grit” that will see students through. “We continue to partner with the Character Lab,” said Samouha, referring to the nonprofit that focuses on the practice of character development.

All that came together at the new Greenfield school, also known as Elm City College Prep, in New Haven. Most of the middle schoolers here came from a traditional Achievement First elementary school, which falls more into the “no excuses” charter mold.

I visited Elm City soon after it opened. What struck me was the special challenge of applying the self-directed-learning model to middle school students. At Blackstone, the self-directed model seemed a natural fit for high schoolers, with more mature students welcoming the independence. Here, school leaders had a different challenge with middle schoolers: a need to build more “scaffolding” — eduspeak for support systems — to help less mature students slide into an unfamiliar role.

The Greenfield model appears to be on the way to working, but with a lot of tweaks, as in: lots more scaffolding. “We can give kids a lot more freedom, but the fact is, these are 10- and 11-year-olds who have been their whole lives basically responding to whatever someone told them to do. They haven’t been living in a personalized environment where they have autonomy and agency,” said Samouha.

But it seemed to be jelling.

Fifth-grader Kiefer Valenzuela found the revised approach more demanding. “You have to concentrate so you don’t get distracted, but I like SDL [self-directed learning]. I enjoy using technology to work, rather than writing on a piece of paper.”

This is an excerpt from the new Richard Whitmire book The Founders: Inside the Revolution to Invent (and Reinvent) America’s Best Charter Schools. See more excerpts at The 74; watch all the videos, download the book and explore the Founders Oral History at The74Million.org/TheFounders.