School Bullying After the Election: Students and Parents Recount Rising Anxiety and Intimidation 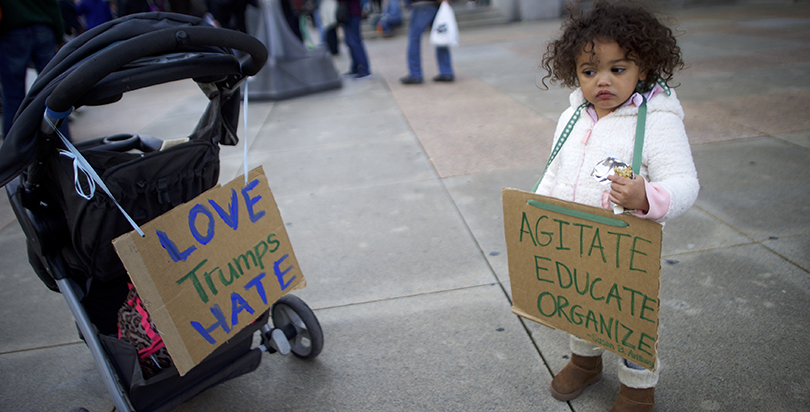 Updated Nov. 16
In the days after last week’s presidential election, The 74 was shocked to see students and parents take to Twitter in droves to report incidents of bullying in their schools. Surprised by the sheer volume of complaints, The 74 began documenting posts on social media and created an email account — bullying@The74million.org — for students, families and educators to tell us what was happening in their schools.
Our inbox was flooded.
From around the country came tales of children targeted by classmates with hate-filled language because of their ethnicity, racial slurs anonymously scrawled inside school buildings, open expressions of bigotry spoken by children within classroom walls, and teachers and principals struggling to reassure their students not to be afraid.
Below is a sample of these experiences as told to our reporters, filled with pain and fear. As difficult as these stories are to read, it is important to share them. They are part of a renewed national dialogue about who we are and what it means to be an American. If you or someone you love has been the victim of school bullying post-election, please email us at bullying@the74million.org. We want to hear your story.
East Allegheny Junior/Senior High School, North Versailles, Pennsylvania
Chantelle Bellavance said her little cousin got teary-eyed recounting to her how classmates called her racist because she supported Donald Trump for president. It got worse when her teacher backed them up, she said.
Just before Election Day, the 8th-grader wore a Trump for president T-shirt to East Allegheny Junior/Senior High School in North Versailles, Pennsylvania. A confrontation ensued after her classmates asked why she was wearing it, Bellavance said.
The younger girl started to tell her fellow students that she watched the presidential debates and attended rallies for both Trump and former Democratic presidential candidate Hillary Clinton to help her make a decision.
“She was trying to talk to students to say, 'This is what I learned and this is what I liked in general,'” Bellavance said.
But students started to shout at her that she was sexist and racist. She shot her teacher a look for help, Bellavance said, but her teacher told her, “No sweetie you don’t know what you are talking about.”
That’s when the students started calling her a “racist white girl.” Not only did the teacher not stop the students from taunting her, Bellevance said the teacher also called her cousin a “racist white girl."
The day after the election, Bellavance said her younger cousin called, asking how she could get the kids to understand that she is not racist.
“She was scared to go to school. She didn’t want to sit in that teacher’s class.”
The family complained about the incident to the principal, who said nothing could be done to the teacher because she has tenure, according to Bellavance. Calls to the school and a district spokesperson were not returned.
“I was furious because I said as an educator, she should get fired,” Bellavance said. “That teacher should have never done that. That teacher had such an opportunity to bring those students together.”
Shenendehowa Central Schools, Clifton Park, New York
After noticing a uptick in the number of students expressing racist rhetoric, Shenendehowa Central Schools Superintendent Oliver Robinson sent a note home to parents.
“Please talk to children about respecting others and also about being resilient when faced with bigotry or other forms of ignorance,” Robinson wrote. “Bigotry and misogyny, in any form – words, action, or demonstration – has no place in Shen schools, buses or otherwise.”
Among the comments reported to district officials are students saying “All hail Trump” and “We’re gonna build a wall,” said district public information officer Kelly DeFeciani.
Shenendehowa parent Jessica Cordova wrote a letter to the district, saying children were chanting “Build a Wall! Kill ‘em all! And all hail Trump!,” according to The Daily Gazette. Cordova’s 14-year-old son, whose father was born in Mexico, was told by fellow students at Shenendehowa’s High School West that he would be deported, according to the newspaper.
So far, DeFeciani, the spokesperson, said none of the incidents have been classified as bullying or harassment, which requires continuous behavior, as opposed to a one-time comment. If a formal complaint is filed, the school principal will determine a consequence or refer the student to the superintendent if a suspension of more than five days is warranted.
“It will get to a point that students will be disciplined if it becomes a harassment or bullying issue,” she said. “A lot of what we are doing right now is more using it as a teachable moment.”
Anne Dirilgen, mother and teacher from Cary, North Carolina

Eight-year-old Fiona Dirilgen didn’t want to go to bed. She wanted to stay up until America’s next president was named — to see if she’d have to leave the country.

Fiona, a third-grader at Brair Cliff Elementary School in Cary, North Carolina, was crying. She didn’t want to be forced from her new home country. But after calming her daughter’s fears, Dirilgen got Fiona to go to sleep. Still, when she told her daughter the election results the next morning — that Trump had indeed won the election — Fiona became upset all over again.