Sanzi: School Safety Cannot Be ‘Guns or Bust.’ We Must Include Sexual Abuse by Teachers, but Unions and the ACLU Are Fighting Its Criminalization 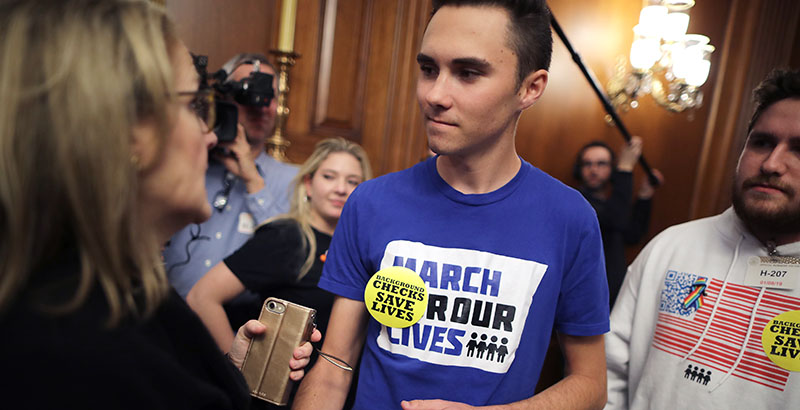 School safety has been a hot topic for politicians and commentators over the past year, but the conversation has largely focused on guns and ignored the very real weaponless harm being done to students.

Stories break almost daily about a teacher or school employee who has been arrested for engaging in a sexual relationship with a student and, very often, the student is in high school. Parents, and even teachers themselves, are gobsmacked when they learn that, in their state, it is not a crime for a teacher to have sex with their students who are 16 or older — the legal age for consent.

Rhode Island is currently in the midst of a small firestorm over this issue. While parents and seemingly most teachers believe it’s a no-brainer that school employees should be legally barred from having sex with students, the state teachers unions and the American Civil Liberties Union disagree. They have come out swinging in opposition to a bill that would finally criminalize it.

Most states with a legal consent age of 16 have language in their law that prohibits adults in positions of authority and with custodial responsibility from engaging in any sexual relationship with students or any other child in their care. The majority of states bump the age to 18 in that situation, though Michigan law doesn’t allow for teachers and students to have sexual relations at any age.

But in Rhode Island, last year’s attempt at passage of a bill that would have included all adults “in loco parentis,” or “in the place of a parent,” was deemed objectionable for being too broad — according to Democratic Rep. Alex Marszalkowski, the bill’s sponsor, those objections came from the ACLU of Rhode Island. The unions assert that the current bill unfairly singles out school employees and the ACLU of Rhode Island now calls it “arbitrary and capricious.”

Arbitrary? Teachers and school employees are the only people who spend upwards of six hours a day with other people’s children because the law requires it. And last year’s bill must have seemed far less arbitrary to them but, unsurprisingly, they opposed that, too.

But it gets worse. They also “expressed concern about targeting school volunteers, because a volunteer coach could be close in age to a student and run afoul of the law under this bill.”

Umm, yes. Exactly. A coach should not be having sex with his or her players.

There are so many incidents of women preying on their male students that the provocative and raunchy sports website BarstoolSports.com has a regular feature called “Grade the Newest Sex Scandal Teacher” — and they only include the ones from states where the information is public because teachers can actually be arrested.

The ugly truth is that teachers unions and the ACLU really just want the bill to go away because they don’t want any wrongdoing by a teacher or coach — even when it involves child seduction of a high school student — to be a crime. The unions would rather handle the sexual abuse of 16-year-olds by their members in-house, neatly under the rug with the rest of the unmentionables they protect. And that is an untenable position, even for them.

The issue, of course, is the power imbalance and the inability of a 16-year-old student to “consent” to sex with an authority figure. Unfortunately, the #MeToo movement has totally overlooked students and minors in its very loud and inflammatory rhetoric about abuses of power, power imbalances, and who can and cannot consent. Is it because according to the most recent study done by the Department of Education, 42 percent of the perpetrators of child sex abuse in schools are women? Maybe. But it may be as simple as the fact that there is no political firepower in protecting children from sexual predation — in 2019, it’s guns or bust.

In the Rhode Island case, though the union playbook on this is pretty uniform state-to-state, union officials try to make the case that termination and potential loss of a teaching license is a sufficient deterrent and punishment for teachers and school employees who have sex with students. And perhaps if personnel records weren’t confidential and kept from the public view, they would have a leg to stand on with that argument. But they oppose this bill knowing full well that there is almost zero chance that potential employers would ever find out about the teachers’ past seduction of students.

It is well documented that sexual predators move from district to district and state to state, preying on new students in new places precisely because there is no way to track them — unless they have been arrested with a crime. And since in Rhode Island and neighboring Massachusetts, sex between teachers and 16-year-old students is legal, a predatory teacher can spend a career sexually abusing high school sophomores who have “consented” to sleeping with their teacher. Or coach. Or counselor.

And if there is no penetration, the age of consent drops to 14 — adults, including teachers and school bus drivers, can fondle 14-year-olds. According to the law in both Massachusetts and Rhode Island, 14-year-olds are capable of giving consent to be sexually touched by the grown-ups taking care of them.

For those whose brains instinctively want to believe that this doesn’t really happen, think again. Parents in Massachusetts found themselves powerless when they discovered that their teenage daughter was in a sexual relationship with her Spanish teacher.

Despite the couple’s initial denials, hotel receipts and graphic photos provided proof of the relationship. The teacher was fired after his administrators saw the photos, but the teacher still refused to end the relationship with the couple’s daughter. So they called the police. And that is when they discovered that the teacher was untouchable by law enforcement because he had not committed any crime under state law. It should come as no surprise that the Massachusetts state police supported efforts to get the law changed, but their support wasn’t enough to overpower the opposition by the teachers union.

As reported by the Boston Globe at the time, “most states, including Massachusetts, allow schools to keep incidents secret by demanding confidentiality agreements as part of settlements with abuse victims. And across the country, school officials are often reluctant to warn their peers about accused teachers for fear that they could be sued.”

And so continues the insidious cycle of unwitting superintendents and school principals hiring teachers who are likely to do harm to students because, despite the many red flags, they arrive to their next district often with a glowing recommendation.

And that is precisely what the teachers unions in Rhode Island and beyond refuse to condemn: deliberate and calculated child endangerment. They can claim, as one union official did during his state house testimony, that “this isn’t really an issue here,” but if that were the case, confidentiality from taxpayers, parents and potential future employers would not be such a priority for them.

It’s a reckless statement that is belied by the data on educator sexual abuse as well as Rhode Island’s well-documented failure when it comes to tracking teachers who have been let go for abusing students.

It is impossible to talk about school safety and student safety, in Rhode Island or anywhere, without including educator sexual abuse in the conversation. It is far more prevalent than gun violence, but just like gun violence in schools, parents deserve to know how often it happens and what is being done to stop it.

Erika Sanzi writes for Education Post and Good School Hunting. She is a senior visiting fellow at the Thomas B. Fordham Institute and has taught in Massachusetts, California and Rhode Island. Born and raised in Massachusetts, she now calls Rhode Island home. She is the mom of three school-age boys and was directly involved in the past two years with the introduction of the bill in Rhode Island that would criminalize sex between teachers and school employees.