Before hers became a household name, Maria Montessori spent 26 years defying her father and male teachers to graduate from the University of Rome’s medical school. It was 1896, and Italian society was not anxious to reward women like her, so after some controversy, Montessori was assigned to run what had been the city’s asylum for “deficient and insane” children.

After she dismissed staff who were contemptuous of their charges, most of whom today would be diagnosed with autism or a cognitive disability, Montessori was left without enough adults to run the residential facility, so she set about teaching the children, first to care for one another and later to read and write at levels no one imagined possible.

Almost 120 years later, in a remarkably orderly classroom at Steele Montessori Academy in San Antonio’s Highland Park neighborhood, Laura Christenberry watches quietly as children from age 3 to kindergarten carry out activities unchanged since their creation by Maria Montessori. Several of the students have disabilities and receive special education services, but it’s impossible to tell which ones.

Never mind that many of the kids are preschoolers; the words on the walls are big ones, like “exquisite” and “symmetry.” Some students pour water from one child-size vessel to another neatly and precisely, re-shelving the materials where they found them. One uses small rods threaded with beads to build a number line of tens and ones that stretches well into the hundreds.

Steele is one of the crown jewels in the San Antonio Independent School District’s portfolio of new schools, but it’s Christenberry’s brainchild. The graduate of a novel principal-grooming partnership between nearby Trinity University and San Antonio ISD, she was dotting the i’s on her plan for a new school just as the district announced it wanted to open a Montessori program.

“We wanted to give the Montessori education to students who don’t normally get it,” says Christenberry. 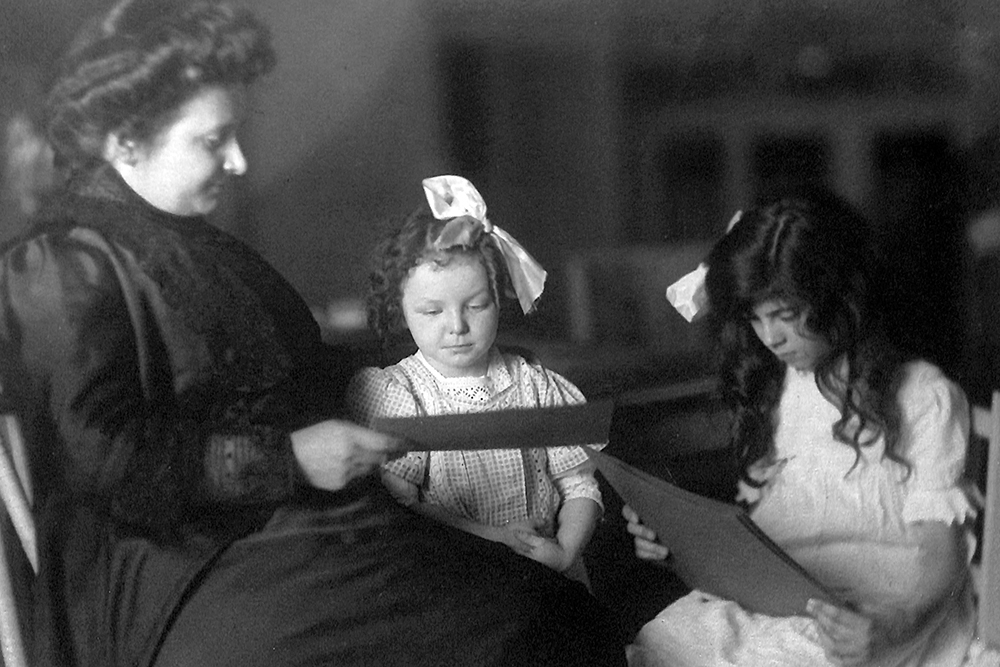 Incredibly popular because of their child-centered philosophy, Montessori schools require specially trained teachers, which makes them rare in traditional districts. There are six other Montessori schools in San Antonio, but all are private and located in more affluent parts of the city.

Christenberry’s voice is hushed as she points out the framed family photos resting on shelves around the room. “We want students to feel this is their second home,” she says. “We want them to feel safe and loved.”

The district, which encompasses the urban core of what is by most accounts the most economically segregated city in the country, is in the midst of an effort to confront its families’ profound and pervasive poverty and to raise student expectations and outcomes with an unprecedented school integration plan.

Almost all 50,000 San Antonio ISD students are Latinos who qualify for subsidized meals, the traditional measurement by which school systems define poverty. That’s not a useful piece of data when poverty is so widespread, so district leaders have taken the novel step of using much more detailed census information on household incomes to distinguish the different levels of student poverty. They then created an enrollment system that balances those demographics in a way that ensures that the poorest families, those struggling with hunger and homelessness, have the same access as those tiptoeing up to the threshold of the middle class. A percentage of seats at all of the district’s most popular “choice” schools — new, innovative programs designed to attract well-off families — are reserved for children from San Antonio ISD’s four different income “blocks,” with Block 1 being the most stable and Block 4 being the most disadvantaged.

When Superintendent Pedro Martinez approached Christenberry about her school proposal, she told him she had one non-negotiable requirement: Because of her rock-solid faith in Montessori’s ability to help children develop certain skills, Christenberry wanted the school to serve a larger-than-usual share of students with disabilities. And she wanted that philosophy of inclusion — of making the program what participants needed, and not vice versa — to extend to all aspects of the school.

In turn, Christenberry endorsed Martinez’s “50-50” plan, in which half the students would come from affluent families — some from outside the district — and the other half from San Antonio ISD families representing the lower-income blocks. But she was determined to keep the middle-class families from dominating the PTA and other parent communities, something that frequently happens when a school enrolls students from different socioeconomic levels.

With a focus on orderly classrooms and the use of “manipulatives,” small items for children to handle that stimulate the development of the brain’s executive function, Montessori can improve young children’s ability to concentrate, persist, and regulate their behavior.

“When you think of Montessori, you think of families of means,” says Martinez. “It’s not a coincidence that so many of our Montessoris are private. It’s elitism.”

Martinez wanted to drive home the point that given proven opportunities, all children could excel. “I wanted to change the conversation for San Antonio,” he says, “and frankly, with a much bigger intention in mind.”

At 4, Santiago Rijos Roadman is one of Steele’s youngest students. He and his parents walk to school every morning from a Craftsman bungalow a few blocks away. Parents Lexa Rijos and Jamie Roadman help, but Santiago mostly gets himself dressed and ready.

“For the most part, we’re just following the lead of the Montessori style of teaching,” Roadman explains. “They encourage them to be adventurous, inquisitive, and anything that they can do on their own to do it on their own.”

Rijos is a nurse practitioner and Roadman makes and restores stringed instruments in a studio behind the house, which they bought 16 years ago not anticipating having kids. After Santiago was born, it started to matter that schools in the neighborhood — funky and working-class — weren’t very good.

They were agonizing over whether to move to a neighborhood they couldn’t afford in a more desirable district or try to find the funds for private school tuition when Rijos noticed a post on the district’s Facebook page.

“I thought, ‘Wow, I wonder where this school is going to be?’” she recalls, laughing at the fact that she typed the address into Google maps before realizing Steele, which will eventually teach kids from age 3 to sixth grade, would be just down the street. “We just got lucky.”

WATCH — A Family’s Perspective on How Their Public Montessori School Led Them to Think Differently About School Integration, Special Education, and Inclusion

In Steele’s case, its 172 seats are filled using several lotteries. The first admits students from the surrounding zip code, then the district, and finally the county. As with its other new “choice” schools — which include dual language academies, a gifted and talented school that does not screen for admission, and schools with technology focuses — the district audits the results to make sure San Antonio ISD families of all socioeconomic backgrounds are represented.

For the 2018-19 school year, Steele had eight applications for every open seat. Attracting affluent applicants was the easy part. Making sure the district’s lowest-income families saw the school as a viable option was harder, says Mohammed Choudhury, San Antonio ISD’s chief innovation officer and the designer of the enrollment system.

Decades of complicated admissions requirements have conditioned impoverished families to believe their children won’t do well in magnet schools and other specialized programs, he says.

“The Montessori program that we have, one of my toughest battles is convincing them that it’s a school that’s not selective-admissions, and their child can thrive in it,” says Choudhury. “I’m proud to say we’ve got a great, healthy pool this year, but it’s going to be a constant battle to shift that narrative.”

To Rijos and Rodman, luck at first meant a school with a model that appealed to them with preschool seats that extended down to 3-year-olds. When Santiago enrolled, however, it was the emphasis on inclusion that enthralled them.

In Texas, where Steele is located, the landscape for children with disabilities is particularly fraught. In the wake of a damning investigation by the Houston Chronicle, earlier this year the U.S. Department of Education censured the state for improperly imposing a cap on the number of students that schools could identify as needing special education services.

Nationally, about 13 percent of students require Individualized Education Programs, known as IEPs, or 504 plans, federally mandated documents spelling out how their needs will be met in school. But for more than 12 years, Texas districts were told by state overseers to keep the number of students served to 8.5 percent or fewer or face sanctions.

As a result, tens of thousands of Texas families who may have been improperly denied special ed services left traditional districts for charter schools or for private schools of wildly varying quality. The state is now negotiating fixes with schools and federal regulators.

Ten percent of Steele students received special ed services in the 2017-18 school year. Using a co-teaching model, educators with special ed licenses work alongside teachers who have Montessori credentials or are acquiring them.

As in many San Antonio ISD schools with curricular themes, Steele’s teachers are retraining together so the entire faculty can implement the school’s model in the same way. Because in this case the model is Montessori, the skills that teachers — regardless of their initial training — are learning are beneficial both to general education and special education students.

There is no Montessori teacher-training program in San Antonio, so the district has brought in experts to work with Steele’s staff. The intensive coaching is intended to benefit both teachers who struggle and master teachers.

“To me, it is a different level of capacity-building,” says Martinez. “It’s us building expertise.”

Students prepare snacks, wash dishes, and carry out other tasks that develop life skills — usually taught to kids with the biggest challenges in segregated settings. And Montessori’s frequent belief that cursive should be the first type of handwriting taught is particularly helpful for students with dyslexia, says Christenberry.

Children with dyslexia have trouble associating sounds and letter combinations. Because cursive requires hand-eye coordination and fine motor skills and forces different parts of the brain to work together, students learn to decode words more easily.

During the school’s first year, Steele’s classrooms, which include students as young as 3, had a teacher and an aide for every 18 students because the school was not enrolled to capacity for its inaugural year. The student-teacher ratio — a hot-button issue in many districts — will go up going forward because Montessori typically has higher ratios than other classrooms.

“Kids can function on their own,” says Christenberry. “The more, the better, because they are helping each other. It’s an ecosystem.”

If schools that embrace students with disabilities are uncommon, schools that insist on inclusive practices are even more so. Santiago doesn’t require special education services, but his family quickly came to love the community-building effects of inclusion.

Rijos and Roadman are regular fixtures at Christenberry’s First Thursdays, monthly evening sessions in which kids enjoy activities while their parents learn about Montessori and its applications at home. They also look forward to First Fridays, when there are often schoolwide social activities, like pumpkin painting for Halloween or a Dr. Seuss birthday celebration.

Mindful that events are easier for some families to get to than others, Christenberry has tried whenever she can to make it possible for everyone in the school community to know about them and participate — albeit in a modified fashion.

“We want to make sure special ed parents are included, and their voices are equal,” Christenberry says.

She schedules as few family-oriented events during the day as possible, so parents who cannot get away from work are not excluded. Because most people have smartphones, the school uses an app to stay in touch and posts many events on Facebook Live. Grandparents, cousins, and friends are encouraged to participate, a huge gesture toward tight-knit Latino communities where extended family is vital.

Read other installments of this series, as well as other recent coverage of school segregation and district integration efforts, at The74Million.org/Integration.

Disclosure: The George W. Brackenridge Foundation provided financial support for this project to The 74.